[fic: white collar] Dreaming Through The Noise - words of wood. Here is some White Collar fic! 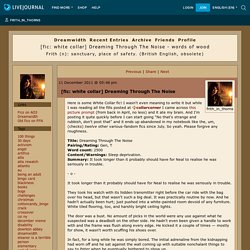 I wasn't even meaning to write it but while I was reading all the fills posted at collarcorner I came across this picture prompt (from back in April, no less) and it ate my brain. And I'm posting it quite quickly before I can start going "No that's strange and rubbish, don't post that" and it ends up abandoned in my notebook like the, um, (checks) twelve other various-fandom fics since July.

So yeah. Please forgive any roughness. X_varda_x: White Collar Fic: Too Many Heroes. Title: Too Many HeroesRating: PG13 for violenceGenre: Gen, H/CWords: 1053Characters: Neal, PeterSummary: Every bystander is a potential vigilante. 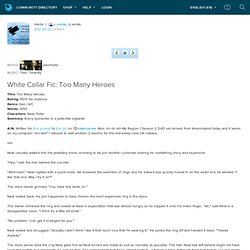 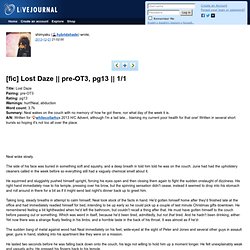 Neal, abductionWord count: 3.7kSummary: Neal wakes on the couch with no memory of how he got there, nor what day of the week it is.A/N: Written for whitecollarhcs 2013 H/C Advent, although I'm a tad late... blaming my current poor health for that one! Written in several short bursts so hoping it's not too all over the place.

Neal woke slowly. The side of his face was buried in something soft and squishy, and a deep breath in told him told he was on the couch. He squirmed and sluggishly pushed himself upright, forcing his eyes open and then closing them again to fight the sudden onslaught of dizziness. Taking long, steady breaths in attempt to calm himself, Neal took stock of the facts in hand. The sudden bang of metal against wood had Neal immediately on his feet, wide-eyed at the sight of Peter and Jones and several other guys in assault gear, guns in hand, stalking into his apartment like they were on a mission. Stranded, a white collar fanfic.

Peter felt helpless; worse than helpless with a blindfold secured to his face and his hands cuffed behind his back. 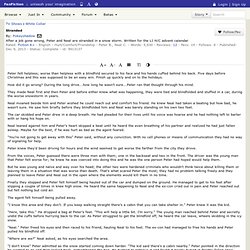 Five days before Christmas and this was supposed to be an easy win. Finish up quickly and on to the holidays. How did it go wrong? During the long drive...how long he wasn't sure...Peter ran that thought through his mind. Be Strong Now. Title: Be Strong NowRating: PGCharacters/Pairings: Neal/Peter (/El)Spoilers: NoneWord Count: 2,400Summary: Peter is trapped with an injured Neal and must get him to safety. 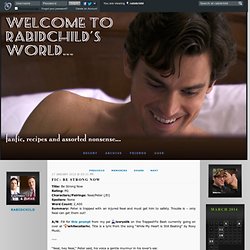 Trouble is – only Neal can get them out! A/N: Fill for this prompt from my pal ivorysilk on the Trapped! Fic Bash currently going on over at whitecollarhc. “Neal, hey Neal,” Peter said, his voice a gentle murmur in his lover’s ear. “Mmmmf,” Neal protested, flinching from the contact of Peter’s rough beard against the sensitive skin behind his ear. “Wake up.” Neal relaxed against Peter, let his head loll back against his shoulder, and opened his eyes reluctantly. “We have to try again, Neal. “Mmm,” Neal replied. “I know, baby,” Peter said, failing to keep the urgency out of his tone. Art, and Other Dangerous Past Times. Title: Art, and Other Dangerous Past TimesAuthor: arsenicjadeFandom/Pairing: WC/CM, N/E/PRating: RLength: ~9kWarnings: Violence of the criminal minds sort, so, gore-y and serial killer-y.Summary: The BAU gets called in on a case Peter's team has been helping Violent Crimes solve. 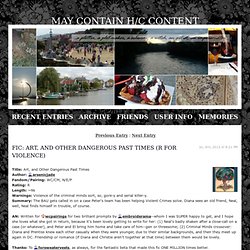 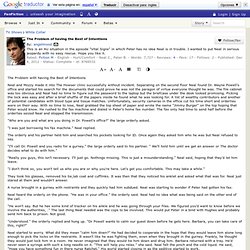 Separating on the second floor Neal found Dr. Wayne Powell's office and started his search for the documents that could prove he was not the paragon of virtue everyone thought he was. The file cabinet was too obvious and Neal had no time to figure out the password to the laptop but the briefcase under the desk looked promising. Picking the lock was easy and after a brief shuffle of the papers inside he found what he was looking for. Peter's Vacation Vs Neal's Vaction. Something Good Disclaimer: I am not the creator(s) of White Collar. 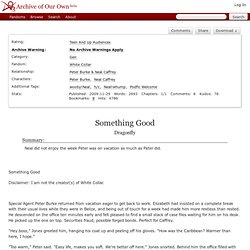 Special Agent Peter Burke returned from vacation eager to get back to work. Elizabeth had insisted on a complete break with their usual lives while they were in Belize, and being out of touch for a week had made him more restless than rested.