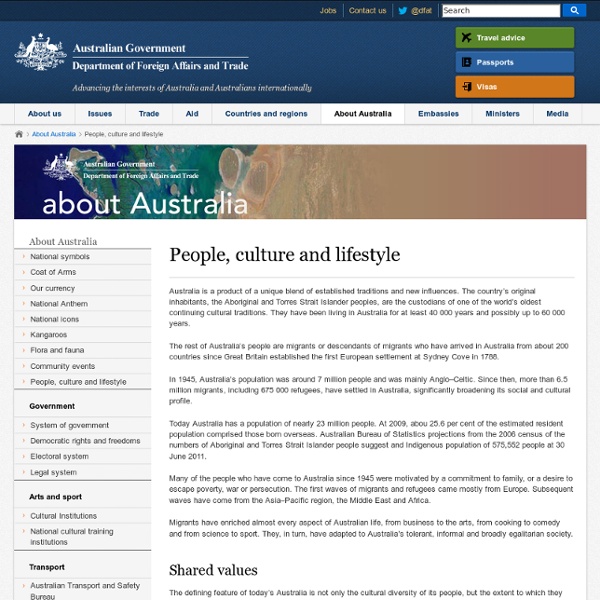 Australia is a product of a unique blend of established traditions and new influences. The country’s original inhabitants, the Aboriginal and Torres Strait Islander peoples, are the custodians of one of the world’s oldest continuing cultural traditions. They have been living in Australia for at least 40 000 years and possibly up to 60 000 years. The rest of Australia’s people are migrants or descendants of migrants who have arrived in Australia from about 200 countries since Great Britain established the first European settlement at Sydney Cove in 1788. In 1945, Australia’s population was around 7 million people and was mainly Anglo–Celtic. Today Australia has a population of nearly 23 million people. Many of the people who have come to Australia since 1945 were motivated by a commitment to family, or a desire to escape poverty, war or persecution. Migrants have enriched almost every aspect of Australian life, from business to the arts, from cooking to comedy and from science to sport.

National Multicultural Festival 2014 | National Multicultural Festival 2014 Multiculturalism in Australia through Food and Sport - ANU Cultures are constantly transforming, never fixed. In particular, we will focus on culture and its intersections with nation in Australia. Due to colonialism and white settlement, and various waves of migration, Australian food and sport have undergone changes and are being transformed by state policies and the cultures of migrant Others. We will begin with some foundational readings on colonial discourse which figure in race and racism, and gender and nationalism. This course focuses on making connections between concepts of race, gender and nation as mediated through everyday cultural practices such as film, food and sport. Learning Outcomes Upon successful completion of this course, students will have the skills and knowledge to: Indicative Assessment 4 short journal entries 250 words each, total 1,000 words (30%) [Learning Outcome 5] Final paper 2,000 words (35%) [Learning Outcomes 1, 2, 3, 5] Midterm 1,000 words (25%) [Learning Outcomes 1, 2, 3, 5] Workload Requisite and Incompatibility

Australia Food, a Brief History Home > Australian Food > The Food Down Under through Time Today it is rich, tasty, stylish and based on fresh ingredients. But Australia food was not always like this. It started very differently. Things were pretty hard at the beginning with supply quite scarce. Then various ethnic populations contributed their own experience and passion for food. Here is a brief history of the Australian cuisine from its early beginnings to present time. Australia Food - The Beginnings The First Fleet left England's shores with food supplies for 2 years, but by the time they arrived in Sydney half was gone and the other half was old. Lack of vegetables and fruit meant many of them suffered from scurvy. So they started to cultivate the soil, not an easy task in an unfriendly environment. Rabbits were introduced to Australia too, but they became a pest very soon and destroyed native plants which fed native animals. Multicultural Influences in Australia's Food The Mediterranean Food Style Like this page?

Multiculturalism in Australia Multiculturalism in Australia has a special cultural status. Many policies supporting differing cultures have been put in place such as the formation of the Special Broadcasting Service.[1] While the White Australia Policy was dismantled after World War II by various changes to immigration policy, the full political introduction of official policies encouraging and supporting multiculturalism did not develop until 1972. Contact between people of different cultures in Australia has been characterised by tolerance and engagement, but have also occasionally resulted in conflict. Australia's diverse migrant communities have brought with them food, lifestyle and cultural practices, which have been absorbed into mainstream Australian culture.[2][3] History[edit] Historical perspective[edit] The Immigration Restriction Act 1901 was the first act of Australian Federal parliament, also known informally as the White Australia policy. Current policies[edit] Impact[edit] Statistics[edit] Projects[edit]

Multiculturalism's influence on society, Multiculturalism, Changing rights and freedoms: migrants, History Year 9, NSW | Online Education Home Schooling Skwirk Australia Introduction Even though by far the largest groups of immigrants to Australia are and always have been from other Anglo-Saxon cultures (Britain, Ireland and New Zealand), the influx of other cultures to Australia has made ours a truly multicultural society. The effects of multiculturalism can be found in the following areas, among others. Food Australian supermarkets, grocery stores, markets, delicatessens, cafes, restaurants and take-away stores offer an enormous variety of foods from around the world. Many Australians of all cultural backgrounds can use chopsticks and enjoy the al-fresco dining introduced by Italian immigrants. Art and architecture See animation Trade, organisations and government Having people in our midst who speak other languages and understand other cultures has helped business and trade in Australia. There are many cultural organisations in Australia that help to support different communities. There are many non-English newspapers around the country too. Conclusion