12 Must-Hear Albums from ECM, the Influential Jazz and Classical Label Finally Streaming. Space, shadow, atmosphere: All are qualities integral to ECM, the Munich record label launched by Manfred Eicher in 1969. 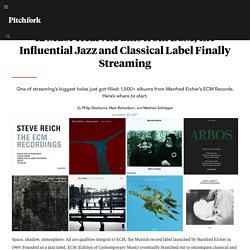 Founded as a jazz label, ECM (Edition of Contemporary Music) eventually branched out to encompass classical and contemporary composition. But the sway of those intangibles of tone and texture is so powerful, they tend to dwarf more earthbound considerations, like genre. Space, shadow, and atmosphere are there in the copious natural reverb and yawning silences and pristine acoustics that have become Eicher’s signature as a producer. (They’re there, too, in virtually every one of the label’s immaculately designed sleeves: the wintry landscapes, the monochrome abstractions, the just-so typography.) To the uninitiated, it’s an aesthetic that could seem tasteful almost to a fault. Until very recently, the only way to hear an ECM recording was to acquire it on vinyl or CD. 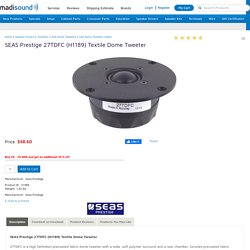 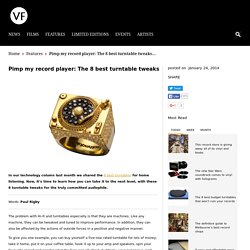 Pimp my record player: The 8 best turntable tweaks In our technology column last month we shared the 8 best turntables for home listening. Now, it’s time to learn how you can take it to the next level, with these 8 turntable tweaks for the truly committed audiophile. Words: Paul Rigby The problem with Hi-Fi and turntables especially is that they are machines. To give you one example, you can buy yourself a five-star rated turntable for lots of money, take it home, put it on your coffee table, hook it up to your amp and speakers, spin your favourite record and wonder what the fuss was all about.

Similarly, play that same turntable on that very wall shelf and be happy with the sound but then add isolation feet, a quality clamp and a replacement platter mat and listen to that turntable sing! Songland Records - Home of the hard to find! Shockwave Supernova - Joe Satriani. Joe Satriani may have retained the services of keyboardist Mike Keneally for Shockwave Supernova, the guitarist's 15th studio album -- Keneally has been in Satch's orbit for a while now -- but he chose to invite bassist Bryan Beller and drummer Marco Minnemann (from the inventive instrumental rock band the Aristocrats) to be his rhythm section for the bulk of the record. 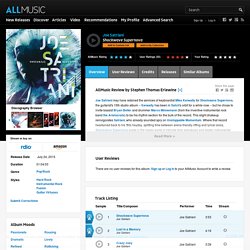 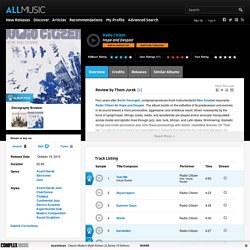 The album builds on the esthetics of its predecessor and evolves in its sound toward a more provocative, aggressive, and ambitious result, driven incessantly by the force of upright bass. Ken Burns Jazz - Sidney Bechet. With cooperation from the Verve and Columbia Legacy catalogs, the Ken Burns Jazz series on CD individually spotlights the musical excellence of 22 jazz originators whose careers and influence are explored in Burns' PBS documentary Jazz. 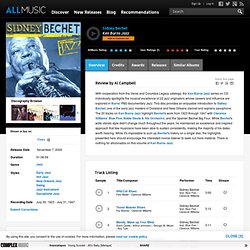 This disc provides an enjoyable introduction to Sidney Bechet, one of the early jazz masters of Dixieland and New Orleans clarinet and soprano saxophone. The 20 tracks on Ken Burns Jazz highlight Bechet's work from 1923 through 1947 with Clarence Williams' Blue Five, Noble Sissle & His Orchestra, and the Spanier-Bechet Big Four.

While Bechet's wide vibrato style didn't change much throughout the years, he maintained an excellence and inspired approach that few musicians have been able to sustain consistently, making the majority of his dates worth hearing. Mue - Emilie Simon. Import Vinyl LPs to MP3 Using a Mac. Marie-Jo Thério : Brille Brille Petite Tortue. 1000 Recordings to Hear Before You Die. Douglas, Dave The Best from a Prolific New Jazz Composer The pianist Paul Bley tells young musicians that no matter what else they do, it's important to record themselves at least every six months. 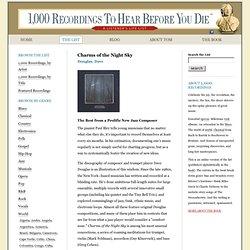 In his estimation, documenting one's music regularly is not simply useful for charting progress, but as a way to systematically foster the creation of new ideas. The discography of composer and trumpet player Dave Douglas is an illustration of this wisdom. Since the late 1980s, the New York–based musician has written and recorded at a blinding rate. Calm and unabashedly romantic, Charms is a chamber jazz exploration of the most ethereal sort. Genre: JazzReleased: 1998, Winter & WinterKey Tracks: "Sea Change," "Little One," "Dance in Thy Soul. " Buy this Recording Share this page: Bookmark on co.mments Bookmark on del.icio.us Bookmark on Digg Bookmark on Facebook Bookmark on Google Bookmarks Bookmark on Ma.gnolia. The Tel Aviv Session: The Toure-Raichel Collective: Music.