Microscopic, Bacteria, Viruses, and the Teeny

Australia Has a Flesh-Eating-Bacteria Problem. About a week after Steven Mikac began taking antibiotics for the strange spot on his leg, the flesh around his ankle started to tighten and swell. 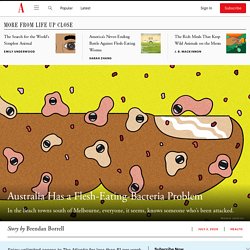 The moist orifice of a wound opened up and took the form of a small bullet hole. A plug of tissue had gone missing—dissolved into pus and slime. Walking was excruciating. US Scientists announce ‘breakthrough’ atomic map of coronavirus. US scientists announced Wednesday they had created the first 3D atomic scale map of the part of the novel coronavirus that attaches to and infects human cells, a critical step toward developing vaccine and treatments. 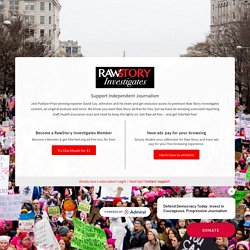 ISS is home to super-tough molds that laugh in the face of deadly radiation. Viruses responsible for the common cold may have a new weak point. A newly discovered indentation on the surface of viruses that cause many illnesses, including the common cold, could be their Achilles’ heel — and a possible target for effective drugs. 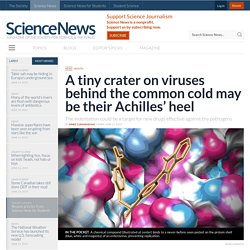 When scientists tested antiviral compounds on cells grown in the lab, the team found one that blocked the replication of an enterovirus. Cryo-electron microscopy revealed that the compound binds to and appears to jam a previously unknown pocket on the virus’s protein shell, researchers report online June 11 in PLOS Biology. Additional testing suggests that the pocket is widespread among picornaviruses, the viral family that includes enteroviruses — which cause hand, foot and mouth disease as well as more dangerous infections — and rhinoviruses, responsible for the common cold. There are no antiviral medications available to treat these pathogens. These viruses mutate very frequently, which makes it “easier for them to escape a drug,” she says. This Super-Evolving Yeast Has DNA That Shouldn't Be Possible.

"I Fought the Law," the 1977 song popularized by the English punk-rock band The Clash, features catchy lyrics about the dire consequences of life as an outlaw. 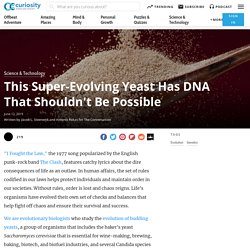 In human affairs, the set of rules codified in our laws helps protect individuals and maintain order in our societies. Ancient feces reveal parasites in 8,000-year-old village of Çatalhöyük. New research published today in the journal Antiquity reveals that ancient faeces from the prehistoric village of Çatalhöyük have provided the earliest archaeological evidence for intestinal parasite infection in the mainland Near East. 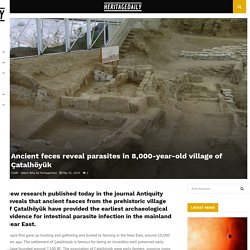 People first gave up hunting and gathering and turned to farming in the Near East, around 10,000 years ago. The settlement of Çatalhöyük is famous for being an incredibly well preserved early village founded around 7,100 BC. The population of Çatalhöyük were early farmers, growing crops such as wheat and barley, and herding sheep and goats. “It has been suggested that this change in lifestyle resulted in a similar change in the types of diseases that affected them. As the village is one of the largest and most densely populated of its time, this study at Çatalhöyük helps us to understand that process better,” says study lead Dr Piers Mitchell of Cambridge’s Department of Archaeology.

Header Image Credit : Stipich Béla. We Should All Probably Freak Out About This Deadly, Drug-Resistant Fungus. Anti-evolution drugs could keep gambling bacteria from developing antibiotic resistance. More evidence shows bacteria "flying" around the world to share genes. A Single Cell Hints at a Solution to the Biggest Problem in Computer Science. NASA Scientists Find Possibly Infectious Superbugs on Board the ISS. Could Bacteria Save the Planet? Yes — If She Can Train Them. Yeast Came From China. When scientists in France set out to sequence 1,000 yeast genomes, they looked at strains from all the places you might expect: beer, bread, wine. 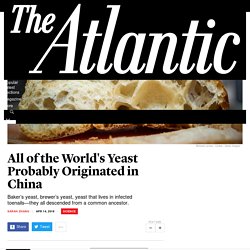 New Giant Viruses Further Blur the Definition of Life. For decades, descriptions of viruses have straddled life and nonlife, a divide that usually isn’t difficult to navigate. Their hallmark characteristics, namely their small size, tiny genomes and parasitic dependence on cellular hosts for replication, set them apart from all other living things despite their animation.

But that story has gotten far more puzzling — particularly since the discovery of the first giant virus in 2003, which was so large that researchers initially thought it was a bacterium. Several families of giant viruses are now known, and some of those giants have more than 1,000 genes; one has a whopping 2,500. (By comparison, some small viruses have only four genes.) Among those genes are ones involved in translation, the synthesis of proteins — a finding that came as a shock. That mingling has sparked contentious debate among scientists about when and how giant viruses evolved. Discovery Could Save Bees From Their Greatest Threat. Does a sea of viruses inside our body help keep us healthy? A century after they were discovered killing bacteria in the feces of World War I soldiers, the viruses known as bacteriophages, or simply phages, are drawing new attention for the role they might play within the human body. 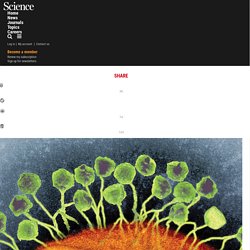 Phages have been found most everywhere, from oceans to soils. Now, a study suggests that people absorb up to 30 billion phages every day through their intestines. Though where the viruses end up is unclear, those data and other recent studies have scientists wondering whether a sea of phages within the body—a “phageome”—might influence our physiology, perhaps by regulating our immune systems. “Basic biology teaching says that phages don’t interact with eukaryotic cells,” says phage researcher Jeremy Barr of Monash University in Melbourne, Australia, who led the study published this week in mBio. "Zombie ant" fungus found to leave its victim's brains uneaten. 0047 // The Microscopic Alchemist: Hunting The Wild Yeast. Is Hurricane Katrina Responsible for Brain-Eating Amoeba in Louisana's Water Supply? Almost a decade later, and we’re still seeing the impact of Hurricane Katrina. 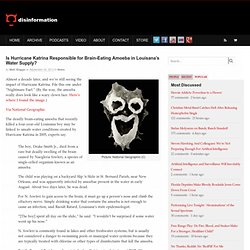 File this one under “Nightmare Fuel.” (By the way, the amoeba really does look like a scary clown face. Here’s where I found the image.) The deadly brain-eating amoeba that recently killed a four-year-old Louisiana boy may be linked to unsafe water conditions created by Hurricane Katrina in 2005, experts say. Brain Eating Amoeba Naegleria Fowleri Warning! It’s in Drinking Water. The deadly brain-eating amoeba, Naegleria Fowleri, has been found for the first time in a regular water supply in New Orleans, NBC News reports. 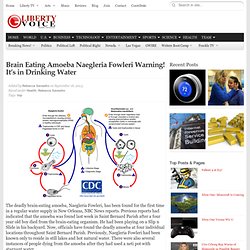 Previous reports had indicated that the amoeba was found last week in Saint Bernard Parish after a four year old boy died from the brain-eating organism. He had been playing on a Slip n Slide in his backyard. Now, officials have found the deadly amoeba at four individual locations throughout Saint Bernard Parish. Previously, Naegleria Fowleri had been known only to reside in still lakes and hot natural water. Brain-Eating Amoeba in Louisiana Linked to Hurricane Katrina? The deadly brain-eating amoeba that recently killed a four-year-old Louisiana boy may be linked to unsafe water conditions created by Hurricane Katrina in 2005, experts say. The boy, Drake Smith Jr., died from a rare but deadly swelling of the brain caused by Naegleria fowleri, a species of single-celled organism known as an amoeba.

(Related: "What We Do—and Don't—Know About Brain-Eating Amoebas. ") The child was playing on a backyard Slip 'n Slide in St. Bernard Parish, near New Orleans, and was apparently infected by amoebae present in the water in early August. About two days later, he was dead. New life found on plastic waste gives rise to the 'plastisphere' Parasites Practicing Mind Control. Photo An unassuming single-celled organism called Toxoplasma gondii is one of the most successful parasites on Earth, infecting an estimated 11 percent of Americans and perhaps half of all people worldwide. 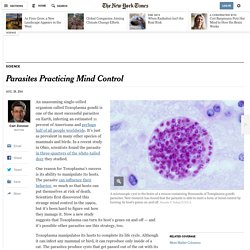 Among New York Subway’s Millions of Riders, a Study Finds Many Mystery Microbes. Photo Have you ever been on the subway and seen something that you did not quite recognize, something mysteriously unidentifiable? Well, there is a good chance scientists do not know what it is either. Researchers at Weill Cornell Medical College released a study on Thursday that mapped DNA found in New York’s subway system — a crowded, largely subterranean behemoth that carries 5.5 million riders on an average weekday, and is filled with hundreds of species of bacteria (mostly harmless), the occasional spot of bubonic plague, and a universe of enigmas.

Almost half of the DNA found on the system’s surfaces did not match any known organism and just 0.2 percent matched the human genome. Study adds to evidence that viruses are alive. A new analysis supports the hypothesis that viruses are living entities that share a long evolutionary history with cells, researchers report. The study offers the first reliable method for tracing viral evolution back to a time when neither viruses nor cells existed in the forms recognized today, the researchers say. The new findings appear in the journal Science Advances. Until now, viruses have been difficult to classify, said University of Illinois crop sciences and Carl R. Woese Institute for Genomic Biology professor Gustavo Caetano-Anollés, who led the new analysis with graduate student Arshan Nasir.

Scientists Find Most Complex Bacteria Ever. 0 Shares Sagulenko et. al. / PLoS ONE A bacterium dubbed the "platypus of microbiology" is even stranger than first thought, with the discovery it contains structures normally only found in more complex cells. The find, by an international team led by University of Queensland researcher Emeritus Professor John Fuerst, adds to the debate about how complex cells evolved, and casts doubt on long-held theories of evolution. Read Full Article » The Most Gruesome Parasites. The man who can map the chemicals all over your body. Ear Maggots and Brain Amoeba: 5 Creepy Flesh-Eating Critters. Here's How to Make Climate Change Extra Scary. Antarctic 'lost world' to be explored. 10 December 2012Last updated at 02:45 ET. Organism without a brain creates external memories for navigation.

Image of the Week.