Bacteria to interact with other life systems

Bioluminscent trees could light up our streets. "When a jellyfish is deep, deep underwater it creates its own light," Roosegaarde tells Dezeen. 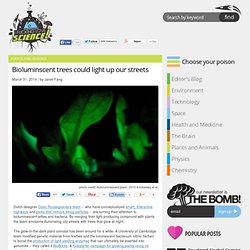 "It does not have a battery or a solar panel or an energy bill. It does it completely autonomously. What can we learn from that? " Roosegaarde is collaborating with Krichevsky to use a collection of these plants for a large-scale installation designed to look like bioluminescent trees. "I mean, come on, it will be incredibly fascinating to have these energy-neutral but at the same time incredibly poetic landscapes,” he says. Relatedly, Studio Roosegaarde is working on a project called Glowing Nature, which doesn’t involve genetic modifications. Video: Dezeen and MINI Frontiers. Bionic Plants: Turning Plants Into Energy Producing Factories.

A group of scientists from Massachusetts Institute of Technology (MIT) have developed a system aimed at increasing the energy yield of plants through the use of nanomaterials. 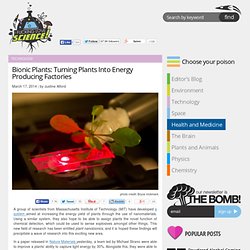 Using a similar system, they also hope to be able to assign plants the novel function of chemical detection, which could be used to sense explosives amongst other things. This new field of research has been entitled plant nanobionics​, and it is hoped these findings will precipitate a wave of research into this exciting new area. In a paper released in Nature Materials yesterday, a team led by Michael Strano were able to improve a plants' ability to capture light energy by 30%. Alongside this, they were able to increase the photosynthetic ability of chloroplasts by almost 50% In a press-release, Strano said "Plants are a very attractive technology platform. Next, the team wanted to increase the amount of sunlight that the chloroplasts can use to make energy.

Using HIV To Cut And Paste The Human Genome. The virus that causes AIDS has been altered so that it can change the human genome in ways that could improve and extend the lives of people with a multiplicity of diseases - including HIV itself. 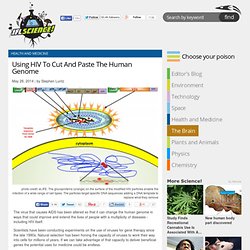 Scientists have been conducting experiments on the use of viruses for gene therapy since the late 1990s. Natural selection has been honing the capacity of viruses to work their way into cells for millions of years. If we can take advantage of that capacity to deliver beneficial genes the potential uses for medicine could be endless. Not all viruses are equally suited to this task. The immune system recognizes many viruses and attacks them. In eLIFE three medical researchers from Aarhus University, Denmark, describe “adapting lentiviral vectors as carriers of designer nuclease proteins, providing efficient targeted gene disruption in vector-treated cell lines and primary cells.”

While the safety issues involved in using viruses are obvious, gene therapy usually involves a more hidden danger. Plant Engineered to Supercharge Photosynthesis with Hopes of Increasing Crop Yields. While computers scientists find new ways to supercharge computers, a team of plant scientists have demonstrated that they can supercharge a plant. 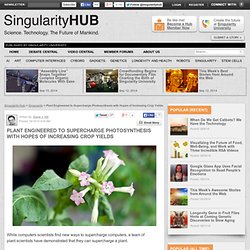 Hoping to speed up plant photosynthesis, researchers from the US and UK have successfully upgraded a carbon-fixing enzyme vital to photosynthesis in a tobacco plant with two enzymes from cyanobacteria, which function at a faster rate. If photosynthesis can be performed more efficiently, plants would grow larger and crops could have higher yields, posibly as high as 60% according to computer models. “This is the first time that a plant has been created through genetic engineering to fix all of its carbon by a cyanobacterial enzyme,” said Cornell Professor Maureen Hanson, a co-author of the study, in the release. She added, “It is an important first step in creating plants with more efficient photosynthesis.”

The study was recently published in the journal Nature. But problems remain. [Media: Dennis Tang/Flickr, Genome Compiler] New System Lets Humans Control Mouse Genes With Their Thoughts. Scientists have been able to tinker with the genes of other organisms for some time now—that’s nothing new. 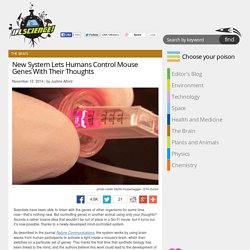 But controlling genes in another animal using only your thoughts? Sounds a rather insane idea that wouldn’t be out of place in a Sci-Fi movie, but it turns out it’s now possible, thanks to a newly-developed mind-controlled system. As described in the journal Nature Communications, the system works by using brain waves from human participants to activate a light inside a mouse’s brain, which then switches on a particular set of genes. This marks the first time that synthetic biology has been linked to the mind, and the authors believe this work could lead to the development of novel ways to treat medical conditions.

For example, the technology could one day be used to instantly deliver drugs when epileptic patients are about to experience a seizure. To create the system, scientists from ETH Zurich married up two different technologies that were already in existence. Are You Ready for Plants That Change Color? Blue, pink, or do you fancy both colors in the same flower? 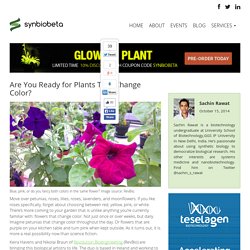 Image source: RevBio. Move over petunias, roses, lilies, roses, lavenders, and moonflowers. If you like roses specifically, forget about choosing between red, yellow, pink, or white. There’s more coming to your garden that is unlike anything you’re currently familiar with: flowers that change color. Not just once or over weeks, but daily. Keira Havens and Nikolai Braun of Revolution Bioengineering (RevBio) are bringing this biological artistry to life. The science behind color changing flowers.