How Your Cat Is Making You Crazy - Magazine 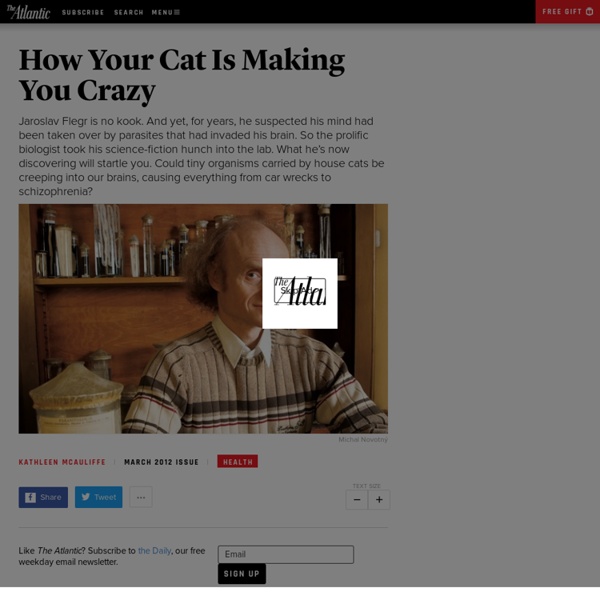 No one would accuse Jaroslav Flegr of being a conformist. A self-described “sloppy dresser,” the 53-year-old Czech scientist has the contemplative air of someone habitually lost in thought, and his still-youthful, square-jawed face is framed by frizzy red hair that encircles his head like a ring of fire. Certainly Flegr’s thinking is jarringly unconventional. Starting in the early 1990s, he began to suspect that a single-celled parasite in the protozoan family was subtly manipulating his personality, causing him to behave in strange, often self-destructive ways. And if it was messing with his mind, he reasoned, it was probably doing the same to others. The parasite, which is excreted by cats in their feces, is called Toxoplasma gondii (T. gondii or Toxo for short) and is the microbe that causes toxoplasmosis—the reason pregnant women are told to avoid cats’ litter boxes. But after years of being ignored or discounted, Flegr is starting to gain respectability. The psychiatrist E. Related:  Diseases, Viruses, Bacteria, Other

Things Adult Medicine Could Learn From Pediatrics Polly Becker Twenty-eight years ago, I wrote about drawing blood for the first time, about the pain of the patient and the self-doubt of the medical student. In my first clinical experience, I was learning a strange new color code: red-top tube for blood chemistries, purple top for hematology, green top, yellow top, and so on. In pediatrics, I soon discovered, the colors were the same but the tubes themselves were much smaller. I thought: If you can get enough blood through a small butterfly needle filling a small tube to do the necessary tests, why must we jab big needles into adults and fill comparatively huge tubes to do the same assessments? It wasn’t the last time I wondered why children were treated with more concern than adults. Dr. His own hospital, like many other institutions, is now using smaller tubes, he said — not the tiniest tubes, which require special handling, but a smaller size that can still be handled routinely by the lab. Dr.

Can Vitamin C Cure Ebola? Steve Hickey, Hilary Roberts & Damien Downing, GreenMedInfoWaking Times If there were a drug that worked on Ebola you should use it. There isn’t. There is only vitamin C. Taking a gram or so of day of vitamin C won’t protect you against anything except acute scurvy; it doesn’t matter whether the vitamin is liposomal, nanoparticles, or even gold-plated. At risk or worried about Ebola? Vitamin C Vitamin C is the primary antioxidant in the diet. The intake for an otherwise healthy person to have a reasonable chance of avoiding a common cold is in the region of 8-10 grams (8,000-10,000 mg) a day. Dynamic Flow The problem with oral intakes is that healthy people do not absorb vitamin C well due to something Dr Robert Cathcart called bowel tolerance. High dose vitamin C has a short half-life in the body. The aim is to achieve dynamic flow, to get vitamin C flowing continuously through the body. The effectiveness of vitamin C is not directly proportional to the dose; it is non-linear. Liposomes

Now that’s a crab Update: Reader Dennis Hansen, a biologist who works on the Indian Ocean island of Aldabra in the Seychelles, which (like the Galapagos) has giant tortoises, sends three coconut crab photos and a note: Here’s a few photos of coconut crabs from Aldabra, for your perusal. They leave the giant tortoises alone, it seems. At least until a tortoise dies, by which time the crabs tear it apart from the inside. When staying in one of the remote field camps on the atoll, they do what they can to rob us of our meagre field rations, though. This photo and caption are from Professor Brian Cox’s Facebook page, and apparently appear in his new book, Wonders of Life with the caption: “These animals are known locally as robber crabs on their native Christmas Island because they have a reputation for curiosity and for stealing things. Actually, I know these beasts by the name “coconut crab,” but their scientific name is Bigus latro (“Bigus” is right!). Here’s a video of one carrying his coconut prize:

21 Ways to Comfort a Friend in Crisis Goodlife Zen A guest post by Gail at A Flourishing Life Life is so rich in offering us a vast array of situations and circumstances, some more challenging than others. When you are in the position to comfort a friend in crisis, you have been given a wonderful opportunity to express your love and caring. For some of us, supporting people going through a difficult time can be confusing or awkward, no matter how much we want to be present for them. Make contact. Remember that a crisis is a tender time for everyone. How have you helped a friend in crisis? Read more from Gail at A Flourishing Life, where she blogs about realizing happiness by freeing ourselves from self-defeating habits. Related articles:

When The CDC Tells Us To Prepare For The Ebola Pandemic, Things Are About To Get Real | Health (Before It's News) The Organic Prepper Daisy Luther Are you ready for the possibility of an Ebola pandemic that will interrupt the day-to-day life of most Americans? Because now, the CDC has issued a checklist and said that “Now is the time to prepare.” You can read the entire document HERE. The checklist is a directory for hospitals and medical personnel. “Every hospital should ensure that it can detect a patient with Ebola, protect healthcare workers so they can safely care for the patient, and respond in a coordinated fashion…While we are not aware of any domestic Ebola Virus Disease cases (other than two American citizens who were medically evacuated to the United States), now is the time to prepare, as it is possible that individuals with EVD in West Africa may travel to the United States, exhibit signs and symptoms of EVD, and present to facilities.” The CDC’s Ebola virus page is HERE. The state department has purchased 160,000 Ebola Hazmat suits. Are you prepped for a pandemic?

Tight Ties, Killer Heels: Clothes Make the Fashion Victims Contrary To What We’re Told ALS Does Have Known Causes & Treatments – Here They Are The Amyotrophic lateral sclerosis (ALS) Ice Bucket challenge is continuing to explode across the worldwide web, and it’s a great opportunity to capitalize on spreading more awareness on how we can implement disease prevention and let people know that there are treatments and potential cures out there that do exist. Don’t get me wrong, between June 1 and August 13, there were over a million videos posted on Facebook and millions of mentions on Twitter. This campaign has led unprecedented attention to the fight against ALS, and it should indeed be applauded as many people’s hearts are in the right place. What is ALS? ALS is often referred to as “Lou Gehrig’s Disease,” it’s a progressive neurodegenerative disease that affects nerve cells in the brain and the spinal cord. Possible Causes of Amyotrophic Lateral Sclerosis I find it remarkable how this information is not made available on the ALS Association website, especially at a time when everybody is doing the ice bucket challenge. Lead 1.

Warm Up Your Voice Listener and blogger Scott from acoupleofquitters.com asked: How do you warm up your voice before speaking? Scott, as you know I use my voice for a living, so I probably do more things than the average bear to warm up and protect my voice. I feel strongly about the importance of keeping my voice healthy and strong. But I didn’t always feel this way. I used to say, “I don’t need to do anything special; I can just talk right?” That’s why most actors, singers, and speakers take extra precautions. So, today, I'll share with you some of the exercises that I do to warm up my voice just before a speaking gig, and also what I do for general preventative maintenance. Just Before A Speech or Podcast First, for every event I request a wireless microphone, even in small rooms. Next, the day before an event I try to rest my voice as much as possible by not talking. In general, the idea is to relax the daily tension that we hold in our neck, face, and mouth. Next, I usually say a few tongue twisters.

ebola_1200a Search in Site The Ebola Epidemic: Infographic « Previous Image Back to Post Leave a Reply AddThis Sharing Facebook Twitter Reddit Google+StumbleUponMore Hide Show AddThisPrivacy Recommended for you Scientists Link Selfies To... www.trueactivist.com The Army Gives Soldiers L... 9 Good Signs That You’re I... 25 Of The Cutest Parentin... This Video Is Shocking Th... This Is The Only Version O... Somebody Put a Camera... Germany’s first waste-fre... AddThis How Exercise Fuels the Brain Shannon Stapleton/ReutersDoes exercise keep your brain running? Moving the body demands a lot from the brain. Exercise activates countless neurons, which generate, receive and interpret repeated, rapid-fire messages from the nervous system, coordinating muscle contractions, vision, balance, organ function and all of the complex interactions of bodily systems that allow you to take one step, then another. This increase in brain activity naturally increases the brain’s need for nutrients, but until recently, scientists hadn’t fully understood how neurons fuel themselves during exercise. Now a series of animal studies from Japan suggest that the exercising brain has unique methods of keeping itself fueled.

Oral Pathogens Can Lead to Cancers in Other Parts of Your Body Dr. MercolaWaking Times Good oral hygiene is even more important than previously thought. The fact that oral pathogens can make their way to distant parts of your anatomy and cause serious problems has been known for many years. Even dentists would agree that bacteria can pass from your gums into your bloodstream and on to your heart, which is why some still prescribe oral antibiotics to a few select patients with a particularly high risk for endocarditis, particularly if they have gingivitis.1 But it appears that the rare case of endocarditis is only the tip of the iceberg. Poor Oral Health Is a Risk Factor for Oropharyngeal Cancers The human papillomavirus (HPV),2 some strains of which are associated with cervical cancer if left untreated for long periods of time, has similarly been linked to vaginal, vulvar, penile, anal, and oropharyngeal cancers (cancers of the throat, tonsils, and base of tongue). Viruses Cause 15 to 20 Percent of All Cancers Another Danger: A Mouthful of Mercury

Whitney Houston and Alcohol’s Toll Remember that phrase? I heard many people repeat it last week as they appraised the waste of ’s later years and flashed back to her 2002 interview with Diane Sawyer, when she uttered those immortal words. She was bristling not at rumors that she abused drugs but at insinuations that she turned to cheap ones. With album sales like hers, you didn’t have to suck on a pipe. Sawyer wanted to know what Houston was on. Everyone wanted to know what Houston was on, and news reports after her death took unconfirmed inventory of the pills in her hotel suite, wondering if they represented the extent of her indulgences. No. But while the drugs leapt immediately to the foreground, with questions raised about which doctors and pharmacies had provided them, the alcohol receded from focus, as it too often does. We don’t talk of its abuse in quite the same titillated, scandalized, censorious tone. As a result, she said, “There are many more deaths due to alcohol. And where are the taxes?