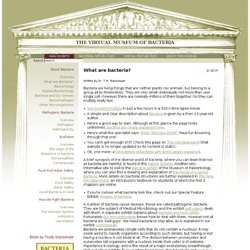 T.M. Wassenaar Bacteria are living things that are neither plants nor animals, but belong to a group all by themselves. They are very small--individually not more than one single cell--however there are normally millions of them together, for they can multiply really fast. See bacteria multiply in just a few hours in a 520 k time lapse movie. Bacteria are prokaryotes (single cells that do not contain a nucleus). Microbiology is the study of prokaryotes, eukaryotes (as long as the organism is microscopically small) and viruses. How Does Bacteria Spread? Bacteria Growth. Major Divisions of Life. 1. 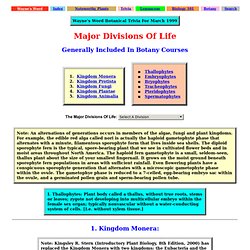 Kingdom Monera: 1. Division Eubacteriophyta (True Bacteria or Eubacteria) Prokaryotic, unicellular organisms; three major types or forms, including spherical coccus, rod-shaped bacillus and spiral-shaped spirillum forms; many pathogenic as well as beneficial species; studied in bacteriology and microbiology courses; grow practically everywhere, including your mouth and digestive tract, the root nodules of legumes and the sun-baked boulders of arid deserts; the latter bacteria are responsible for microscopic layers of iron and manganese oxide on boulders known as desert varnish. Nitrogen fixation is a remarkable prokaryotic skill in which inert atmospheric nitrogen gas is converted into ammonia. Note: Here is a more accurate update for the above equation: N2 + 8 H+ + 8e- +16 ATP + 16 H2O = 2 NH3 + H2 + 16 ADP +16 Pi The fowing explanation is from Jim Deacon of the Institute of Cell and Molecular Biology, The University of Edinburgh. The Six Kingdoms.

Animals The animal kingdom is the largest kingdom with over 1 million known species. 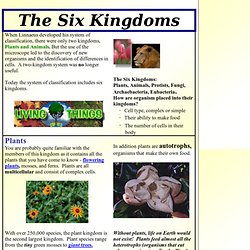 Sumatran Tiger - Kingdom: Animalia, Phylum, Chordata, Class Mammalia, Order Carnivora, Family Felidae, Genus Pathera, Species tigris. What are Archaebacteria? Archaebacteria are unicellular which means that they consist only of a single cell. as to some of the other questions, i do not quite know because i am only at high school level, a sophomore. 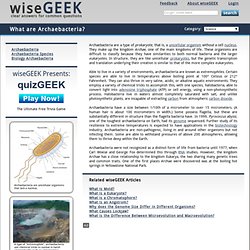 I do not understand how or why this is so, but I have a theory that archaebacteria can adapt or acclimate to their environment at a rapid rate, I mean, they've been around for ages. The Average Bacterium. You are never alone. 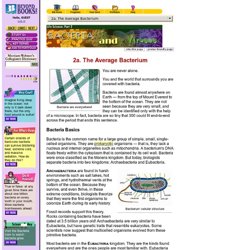 You and the world that surrounds you are covered with bacteria. Bacteria are found almost anywhere on Earth — from the top of Mount Everest to the bottom of the ocean. They are not seen because they are very small, and they can be identified only with the help of a microscope. In fact, bacteria are so tiny that 300 could fit end-to-end across the period that ends this sentence. Bacteria Basics Bacteria is the common name for a large group of simple, small, single-celled organisms. Are found in harsh environments such as salt lakes, hot springs, and hydrothermal vents at the bottom of the ocean. Fossil records support this theory. Difference between Eubacteria and Archaebacteria.

According to scientists, there are six differentiated kingdoms into which living things can be divided. 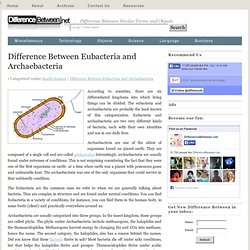 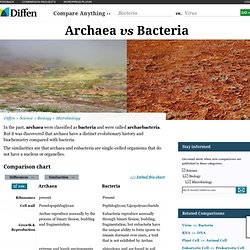 But it was discovered that archaea have a distinct evolutionary history and biochemistry compared with bacteria. Eubacteria Examples. The eubacteria is a super class which groups different types of bacteria except for archaebacteria. 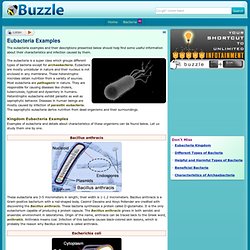 Eubacteria are mostly unicellular in nature and their nucleus is not enclosed in any membrane. These heterotrophic microbes obtain nutrition from a variety of sources. What are Monerans? Monerans M onerans are one-celled organisms that have no nucleus or organelles. They do contain hereditary material but it is not contained in a nucleus. Even with out these parts moneran cells have the same same basic life processes as an animal cell. 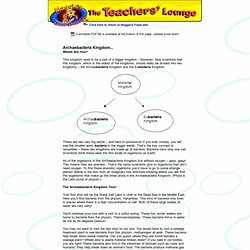 The Archaebacteria Kingdom Tour! Your first stop will be the Great Salt Lake in Utah or the Dead Sea in the Middle East. You’ll continue your tour with a visit to a sulfur spring. You may not want to visit the last stop on our tour. Design It! Pictures of Monerans. The Social Lives of Bacteria.