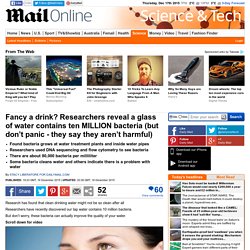 But don’t worry, these bacteria can actually improve the quality of your water. Scroll down for video.

Bacteria with “memory construct” snoops on our colon. If only it were easier to monitor and record what happens in our guts, the source of those feelings we can't explain but know instinctively are right. 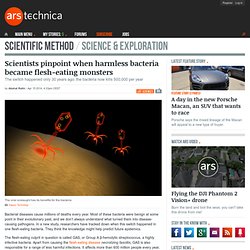 Most of these bacteria were benign at some point in their evolutionary past, and we don’t always understand what turned them into disease-causing pathogens. In a new study, researchers have tracked down when this switch happened in one flesh-eating bacteria. They think the knowledge might help predict future epidemics. The flesh-eating culprit in question is called GAS, or Group A β-hemolytic streptococcus, a highly infective bacteria. Apart from causing the flesh-eating disease necrotizing fasciitis, GAS is also responsible for a range of less harmful infections. These bacteria appeared to have affected humans since the 1980s. Lead researcher James Musser of the Methodist Hospital Research Institute said, “This is the first time we have been able to pull back the curtain to reveal the mysterious processes that gives rise to a virulent pathogen.”

Genetic gymnastics Continental drift. Are the germs in your gut the key to a long life? Experts believe bacteria could determine your weight and risk of disease. Scientists found gut bacteria is unique to a person and largely stays the same over timeBut dieters' 'gut identity' did change according to which weight-loss regime they were onBelieve that one day analysing a person's 'gut identity' could help doctors assess patients' risk of disease By Rachel Reilly Published: 11:02 GMT, 5 July 2013 | Updated: 11:07 GMT, 5 July 2013 Scientists say that the bacteria in your body could determine your weight and risk of disease throughout your life. 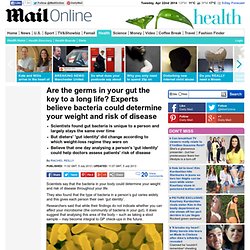 They also found that the type of bacteria in a person’s gut varies widely and this gives each person their own ‘gut identity’. Researchers said that while their findings do not indicate whether you can affect your microbiome (the community of bacteria in your gut), it does suggest that analysing this area of the body – such as taking a stool sample – may become integral to GP check-ups in the future. The study, carried out by Washington University in St. Stool samples may become integral to GP check-ups.

Online Textbook of Bacteriology. Belly button bacteria oligarchs dominate our navel's ecosystem. The Belly Button Biodiversity Project, which explores the bacterial ecosystems living in its participants' navels, has discovered that a small number of bacterial phylotypes (or "species") dominate the micro-landscape. 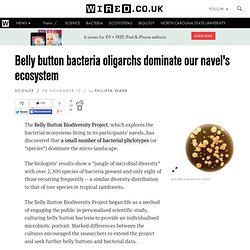 The biologists' results show a "jungle of microbial diversity" with over 2,300 species of bacteria present and only eight of those recurring frequently -- a similar diversity distribution to that of tree species in tropical rainforests. The Belly Button Biodiversity Project began life as a method of engaging the public in personalised scientific study, culturing belly button bacteria to provide an individualised microbiotic portrait. Marked differences between the cultures encouraged the researchers to extend the project and seek further belly buttons and bacterial data. The species distribution is best explained referencing "oligarchs" -- species which are present in most of the ecosystems and abundant when they are present. 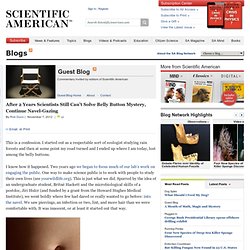 I started out as a respectable sort of ecologist studying rain forests and then at some point my road turned and I ended up where I am today, lost among the belly buttons. I know how it happened. Two years ago we began to focus much of our lab’s work on engaging the public. One way to make science public is to work with people to study their own lives (see yourwildlife.org). This is just what we did. Image 1. The idea was simple.

We quickly found that peoples’ belly buttons differed in terms of which species live in them. We began to more seriously wonder what explained the differences from one person to the next. We solicited even more involvement—more students to help with research, more petri dishes and, more ideas from participants, and, of course, more belly buttons. Doctors stop hospital outbreak of MRSA after cracking its genetic code and tracking down the health care worker carrying the bacteria. Cambridge scientists used the technology to identify a member of staff unwittingly spreading the infectionBy identifying the bacterial strains, experts were able to halt the infection By Anna Hodgekiss Published: 09:42 GMT, 14 November 2012 | Updated: 13:05 GMT, 14 November 2012 Hundreds of lives could be saved each year after British scientists worked out how to stop a potentially deadly outbreak of MRSA. 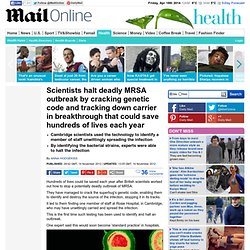 They have managed to crack the superbug's genetic code, enabling them to identify and destroy the source of the infection, stopping it in its tracks. It led to them finding one member of staff at Rosie Hospital, in Cambridge, who may have unwittingly carried and spread the infection. This is the first time such testing has been used to identify and halt an outbreak. Bacteria living in sediment on the ocean floor survive by becoming 'living power cables', new study claims. Just a teaspoon of mud can contain a kilometre of living electric cablesScientists believe they are the source of electric currents on the sea bed By Daily Mail Reporter Published: 18:16 GMT, 24 October 2012 | Updated: 08:30 GMT, 25 October 2012 Living electric cables made from bacteria have been discovered on the sea bed. 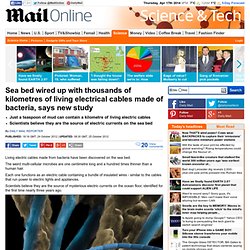 The weird multi-cellular microbes are one centimetre long and a hundred times thinner than a human hair. Each one functions as an electric cable containing a bundle of insulated wires - similar to the cables that run power to electric lights and appliances. Manmade Snow From Recycled Sewer Water May Contain Antibiotic-Resistant Bacteria. This winter, an Arizona ski resort, Snowbowl, will be the first to use treated sewage water, and sewage water alone, to make manmade snow. 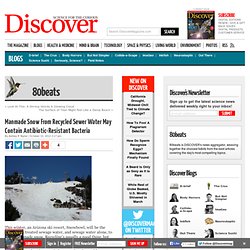 Recycling’s usually a good thing, but opponents of the plan worry about chemicals left in the snow, and an August report by a civil and environmental engineer says that the recycled water, already used for irrigation in Flagstaff green spaces, may contain antibiotic-resistant bacteria. As Virginia Tech’s Amy Pruden describes in an unpublished report, covered by The New York Times Green blog, her group tested reclaimed water from various green spaces irrigated by Flagstaff’s recycled water and found five of the eight antibiotic resistance genes that they were testing for. These genes allow disease-causing bacteria, such as Staphylococcus aureus, to flourish despite antibiotic treatments. Pruden is not the first researcher to be concerned about the growth of antibiotic-resistant bacteria in effluent from wastewater treatment plants.

New Species of Bony Bacteria Discovered. Scientists find life on the sea bed that's 86 million years old and hasn't eaten since the age of dinosaurs. By Leon Watson Published: 19:14 GMT, 22 May 2012 | Updated: 06:35 GMT, 23 May 2012 They haven't eaten for an incredible 86 million years - so you'd think they would be quite peckish. 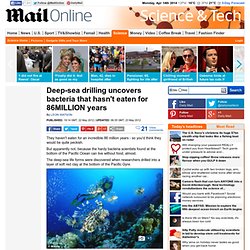 But apparently not, because the hardy bacteria scientists found at the bottom of the Pacific Ocean can live without food, almost. Whenever you enter a room you stir 37m bacteria into the air every hour. 'All infectious diseases we get, we get indoors,' says scientist By Ted Thornhill Published: 14:46 GMT, 29 March 2012 | Updated: 14:49 GMT, 29 March 2012 A person's mere presence in a room can add 37 million bacteria to the air every hour — material largely left behind by previous occupants and stirred up from the floor, according to new research. ‘We live in this microbial soup, and a big ingredient is our own microorganisms,’ said Jordan Peccia, associate professor of environmental engineering at Yale and the principal investigator of the study.