DeVos was terrible at her job and knew nothing about public schools. That was exactly what the far right wanted - Raw Story - Celebrating 16 Years of Independent Journalism. Even Betsy DeVos — one of the longest-serving of Donald Trump's revolving-door cabinet secretaries — finally reached what she called an "inflection point" with the former president's open call for violent insurrection, resigning slightly before he left office. 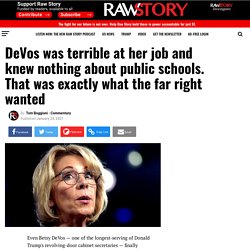 Amid the chaotic Trump administration, DeVos was in many ways the perfect choice for education secretary. She showed an astounding lack of knowledge about public education. She seemed at best uninterested and at worst downright hostile to America's public schools. This article first appeared in Salon. DeVos' tenure leaves us with unanswered questions: How is it possible that the leader of the Education Department could be so indifferent to public education itself? Scholars and pundits have offered answers. That explanation is true and important. But that explanation can only get us so far. Betsy DeVos Apologizes For Ever Being Complicit With Something As Toxic As Public Education. WASHINGTON—Following her decision this week to resign as President Trump’s education secretary, Betsy DeVos apologized Friday for ever being complicit with anything as toxic and reprehensible as public education. 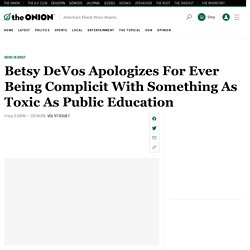 “I can no longer associate myself with an administration that, despite its many achievements, has failed to dismantle a corrupt system under which money from hardworking taxpayers is shamelessly funneled into our schools,” said DeVos, adding that she now regretted having taken the Cabinet position, which forced her to forsake so many of her deeply held views on education policy. “It is simply unconscionable. Right now, in tens of thousands of schools across America, children are being educated without paying a single dime for the privilege. And while there are praiseworthy exceptions, the vast majority of educational institutions in this country are being operated by people who aren’t even trying to turn a profit. How Trump Made a Tiny Christian College the Nation’s Biggest Prison Educator.

Six years ago, Ashland University, a small Christian college in the north-central region of Ohio known as the “Buckeye Bible Belt,” was in trouble. 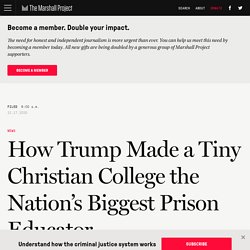 The school was $70 million in debt, was given a “junk” rating by the investors’ service Moody’s, and was later cited by state officials for transcript manipulation, records show. But under Donald Trump’s Department of Education, led by Betsy DeVos, Ashland’s fortunes have turned around. After being selected to participate in a federal financial aid initiative for incarcerated people, the university’s correctional education program was able to spread to more than 100 prisons and jails in 13 states, from Louisiana to Minnesota. 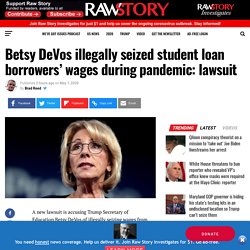 Politico reports that a woman from upstate New York this week filed a lawsuit on behalf of nearly 300,000 borrowers who say that the Department of Education has continued swiping money from their paychecks even during the COVID-19 pandemic. “DeVos first announced in March that she would take administrative action to automatically stop the Education Department from seizing the wages — and tax refunds — of defaulted student loan borrowers for at least two months,” Politico writes. “Congress then included that policy in the CARES Act and extended it, prohibiting the Education Department from garnishing wages or tax refunds through Sept. 30.”

Enjoy good journalism? … then let us make a small request. Raw Story is independent. Lawmakers criticize Betsy DeVos after rule change slashes funding for more than 800 rural schools. Secretary of Education Betsy DeVos came under fire after her department made a bookkeeping change that would result in major funding cuts for America's rural schools. 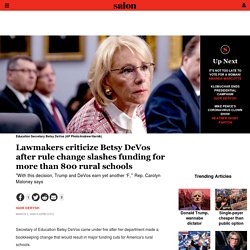 The Department of Education quietly informed state education officials that it would change how districts report the number of students who live in poverty, which could result in funding cuts for more than 800 of the "poorest" and "most geographically isolated" schools, according to The New York Times. The changes to the Rural and Low-Income School Program came after the department found that some districts "erroneously" received funding despite being ineligible. The department previously allowed schools to report the percentage of students who qualify for free or reduced-price lunch, which it used to calculate poverty rates, for nearly two decades.

"When you discover you're not following the law Congress wrote, you don't double down. You fix it," Hill said. Some southern states are expected to be hit especially hard. Sen. WATCH: Betsy DeVos absolutely destroyed in Congressional hearing into her lawbreaking. Controversial Education Secretary Betsy DeVos was blasted during a congressional hearing examining how she was held in contempt of court for violating a judge’s court order. 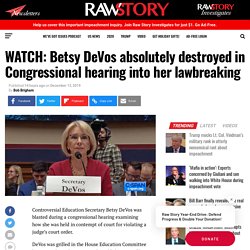 DeVos was grilled in the House Education Committee by Rep. Josh Harder (D-CA), who told the story of how the actions for DeVos is costing one of his constituents $40,000. “After being ordered by a federal court to stop collecting debts from cheated Corinthian students, you ignored the order and kept stealing money from these students,” Harder said. DeVos held in contempt for violating judge's order on student loans. DeVos is named in the lawsuit in her official capacity as secretary of Education. 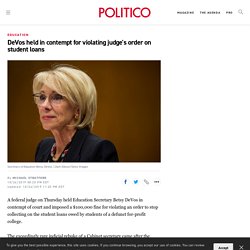 She will not be personally responsible for paying the $100,000 in monetary sanctions, which will be paid by the government. The judge ordered that the fine go to a fund held by the former Corinthian students’ attorneys. It’s meant to help defray the damages and expenses associated with the improper collection of the loans, she said. The judge ordered the government and the attorneys to come up with a plan for administering the fund. "We're disappointed in the court's ruling," the Education Department said in a tweet on Thursday evening. Mark Brown, the head of the department's Office of Federal Student Aid, said in a video posted online that there was no "ill-intent" by the department and that officials "have taken swift action to correct the mistake.

" An Education Department spokesperson did not respond to a request for comment on whether the department planned to appeal the decision. Judge Reminds Betsy DeVos She Can Go To Jail. Education Secretary Betsy DeVos on Monday was told in no uncertain terms that her refusal to abide by a 2018 order stopping her department from collecting on student loans made to predatory for-profit Corinthian College had the potential to land her in jail, though Magistrate Judge Sallie Kim made clear that was, for now, an unlikely outcome. 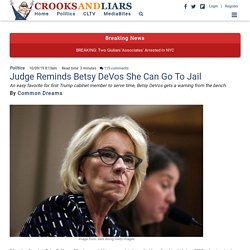 "At best it is gross negligence, at worst it's an intentional flouting of my order," Kim told lawyers from the education department in court Monday. "I'm not sure if this is contempt or sanctions. " "I'm not sending anyone to jail yet," Kim added, "but it's good to know I have that ability. " As journalist Sarah Jaffe noted on Twitter, "Betsy DeVos is in trouble. " Kim ruled in 2018 that DeVos and the department had to stop collecting on student loans issued for attendees of Corinthian, which abruptly closed its doors in 2015.

As the Post explained: ↓ Story continues below ↓ That is not, however, what happened, as the Post explained: As the Post explained: Betsy DeVos nailed in court for not delivering on promise for student loan forgiveness – Raw Story. Betsy DeVos: Defensive Smiling. Things didn’t go well when Betsy DeVos was confronted with her department’s charter school fraud. Rep. Marcia Fudge wrecks Betsy DeVos for 'creating a shell game to fund private and religious schools' Betsy DeVos Defends Slashing Funds for the Special Olympics. DeVos Claims Students Learn BETTER In Larger Classes. Knowhere. Splinternews. Betsy DeVos Says She's 'Misunderstood,' Then Struggles To Explain Her Own Policies.

Betsy DeVos faces absolutely stunning 'silent' protest at Harvard. Elizabeth Warren Schools Betsy DeVos At Confirmation Hearing. Betsy DeVos Fight Demonstrates Donald Trump’s Serious About Changing Washington. At its heart, her nomination is about a changing America, and a proxy war coming to a head in the U.S. 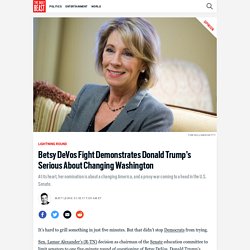 Senate. It’s hard to grill something in just five minutes. But that didn’t stop Democrats from trying. Sen. Betsy DeVos Just Flunked Her Senate Test. If confirmed as secretary of education, would Betsy DeVos promise not to strip funding from public schools? 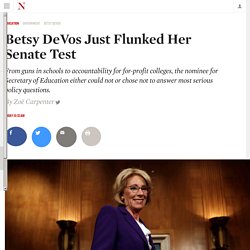 “I look forward, if confirmed, to working with you to talk about how we address the needs of all parents and all students,” the Republican donor and activist told a Senate committee in response. What are her proposals for making childcare affordable? “I would look forward to working with you,” DeVos responded. Who is Betsy DeVos? - What are the Secretary of Education's Policies? Betsy DeVos was confirmed as Secretary of Education Tuesday after a tie-breaking vote from Vice President Mike Pence. She faced staunch opposition from all Senate Democrats, who protested her nomination with an all-night session, and even two Republicans. Here's a closer look at the policies that made DeVos the most narrowly-approved Cabinet secretary in history, and one of Donald Trump's most controversial nominations.

Advertisement - Continue Reading Below School Choice and Vouchers Getty DeVos' most prominent and most controversial stance is on school choice, which would allow parents to choose where their children attend school, instead of following the traditional public-school model. "Let the education dollars follow each child, instead of forcing the child to follow the dollars. Trump is also a proponent of vouchers, and has proposed dedicating $20 billion in federal funding toward voucher programs and charter schools. As Sen. How DeVos Plans To Change The Department Of Education. Betsy DeVos was confirmed by a 51-50 Senate vote Tuesday to run the Department of Education. Every American Should Be Extremely Unsettled By The Initiatives Trump’s Cabinet Is Pursuing. The documents referred to in this editorial are part of a trove of classified files provided to The Onion by an anonymous whistleblower in the White House.

All of these documents can be found here. As soon as Donald Trump won the presidency last November, it became clear to every editor, journalist, and indentured Laotian typesetter at The Onion that we would soon be contending with an unorthodox administration. Now, as our employees ceaselessly analyze a vast trove of classified White House documents on ocean barges floating outside the jurisdiction of the Fair Labor Standards Act, we are finding ample evidence that the path being pursued by this president and his cabinet is, as anticipated, startlingly unlike any other in history.