Dangers of Vaping: Mysterious Lung Illnesses. In 2017, the market for e-cigarettes in the United States alone grew 40%, becoming a $1.16 billion industry, but vaping has been met with a lot of controversy along the way. 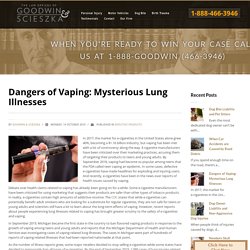 E-cigarette manufacturers have been criticized over their marketing practices, accusing them of targeting their products to teens and young adults. By September 2018, vaping had become so popular among teens that the FDA called teen vaping an epidemic. In some cases, defective e-cigarettes have made headlines for exploding and injuring users. And recently, e-cigarettes have been in the news over reports of health issues caused by vaping. Debate over health claims related to vaping has already been going on for a while. In September 2019, Michigan became the first state in the country to ban flavored vaping products in response to the growth of vaping among teens and young adults and reports that the Michigan Department of Health and Human Services was investigating cases of vaping-related lung illnesses. 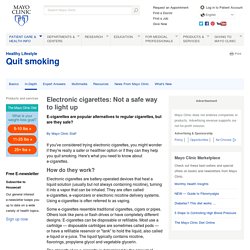 What Do We Know About E-cigarettes? E-cigarettes are known by many different names and sometimes people find it hard to understand what is really known about them. 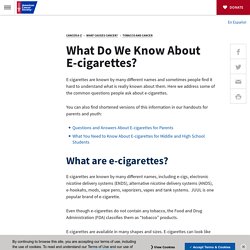 Here we address some of the common questions people ask about e-cigarettes. What a Breast Cancer Misdiagnosis Means for Patients. Breast biopsies often misdiagnosed, leading to wrong treatment for some. Sign up for our newsletter March 18, 2015, 11:50 AM GMT / Source: TODAY Here's another reason for getting a second medical opinion: Biopsy specialists frequently misdiagnose breast tissue, potentially leading to too-aggressive treatment for some women and under-treatment for others, a study suggests. 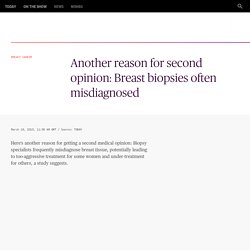 The results indicate that pathologists are very good at determining when invasive cancer is present in breast tissue, but less adept at making the right diagnosis with less serious conditions or when biopsied tissue is normal. The study involved 115 U.S. pathologists and 240 breast biopsy specimens. Breast tissue misdiagnosed more often than you think. Here's another reason for getting a second medical opinion: Biopsy specialists frequently misdiagnose breast tissue, potentially leading to too-aggressive treatment for some women and undertreatment for others, a study suggests. 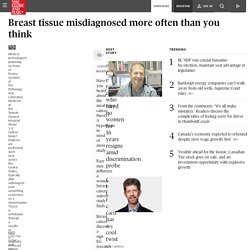 The results indicate that pathologists are very good at determining when invasive cancer is present in breast tissue, but less adept at making the right diagnosis with less serious conditions or when biopsied tissue is normal. The study involved 115 U.S. pathologists and 240 breast biopsy specimens. Their diagnoses were matched against those of three experts. Sleeping with a newborn baby: an ObGyn gives advice - Reverie. Congratulations, and welcome to motherhood for the first, second, or greater time. 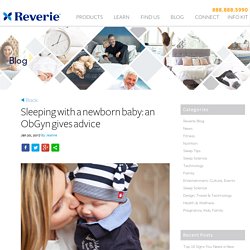 It is the hardest job you will ever have but it comes with the greatest benefits package. For me, the most difficult part of the newborn period is sleep deprivation. My daughter needed to nurse every 2-3 hours for one week, and every feeding felt like an eternity. Men's Fitness Magazine. Burger Bites. The Risk of Medical Malpractice During Plastic Surgery. As the year draws to a close, millions of people all over the world are thinking of ways to make their lives better in the new year. 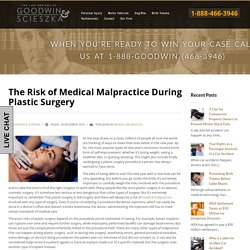 By far, the most popular types of new year’s resolution involve some form of self-improvement, whether it’s losing weight, eating a healthier diet, or quitting smoking. This might also include finally undergoing a plastic surgery procedure a person has always wanted to have done. NY Times. As the year ends, the Science desk at The New York Times asked its reporters to look back at the news they reported on that was the most memorable. 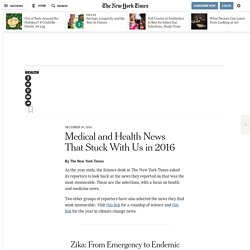 These are the selections, with a focus on health and medicine news. Two other groups of reporters have also selected the news they find most memorable: Visit this link for a roundup of science and this link for the year in climate change news. Zika: From Emergency to Endemic Threat Image. How to Build Sustainable Community Health Programs in the United States. Henry’s doctor gave him clear advice: check your blood sugar and take your insulin every day, not just when you feel bad. 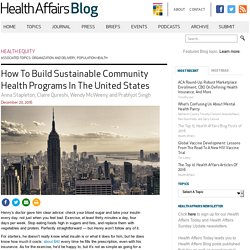 Exercise, at least thirty minutes a day, four days per week. Stop eating foods high in sugars and fats, and replace them with vegetables and protein. Holiday Decor Can Be Hazardous. Holiday Decor Can Be Hazardous. Woman Sues Zara After Being Injured by Rat-Infested Dress. When we talk about dangerous products, we’re often talking about items that are designed in a way that makes them more dangerous than they need to be or are made with components that are prone to failing and making a product dangerous. 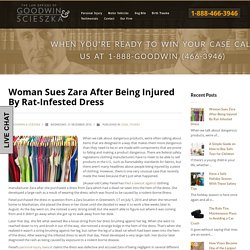 There are federal safety regulations clothing manufacturers have to meet to be able to sell products in the U.S., such as flammability standards for fabrics, but there aren’t many headlines about people being injured by a piece of clothing. However, there is one very unusual case that recently made the news because that’s just what happened. 24-year-old Cailey Fiesel has filed a lawsuit against clothing manufacturer Zara after she purchased a dress from Zara which had a dead rat sewn into the hem of the dress.

The Science Behind Cold Feet - Reverie. So you climb into bed late at night, snuggle up next to your already-sleeping partner, and he immediately yelps. Cold feet strike again. An age-old nemesis to cuddling. Especially now that winter is upon us. Cold feet are common and often accompanied by cold hands. How to read a kombucha label. U.S. Doctors Still Over-Prescribing Drugs: Survey. By Dennis Thompson HealthDay Reporter MONDAY, Dec. 5, 2016 (HealthDay News) -- Despite evidence that certain drugs aren't always necessary, doctors are still prescribing these treatments, a new survey of doctors reveals.

Antibiotics are by far the drugs most frequently used in situations where they'll provide no value for patients. The survey found that more than a quarter of doctors surveyed (27 percent) said that antibiotics are often administered to patients when the drugs will do no good. In most cases, the antibiotics are prescribed to treat upper respiratory infections even though these are most often caused by viruses unaffected by the medication, said Dr. Other treatments that doctors use frequently despite their questionable value include aggressive treatments for terminally ill patients (9 percent), drugs prescribed for chronic pain (7 percent), and dietary supplements such fish oil and multivitamins (5 percent), the survey revealed.

How Vioxx Became One of the Largest Drug Recalls of All Time. When the prescription drug Vioxx hit the market in May of 1999, it was touted as a new type of NSAID painkiller intended to help with osteoarthritis pain, as well as other types of chronic and acute pain. Vioxx was supposed to be different from other types of painkillers because it wouldn’t cause the types of gastrointestinal problems that were linked to older painkillers.

Five years later, Vioxx became one of the most significant defective drug cases of all time after it was pulled from the market due to the fact it increased the risk of heart attacks and other cardiac problems. A high-protein vegan taco recipe from a top chef. What's so special about manuka honey? How Inadequate Medical Staffing Affects Patients. Depression in pregnancy increases risk of mental health problems in children. Depression in pregnancy increases the risk of behavioural and emotional problems in children, says a new review published in The Lancet Psychiatry. Chill Out: Stress Can Override Benefits Of Healthful Eating. Eating well has many known benefits. A Happy Spouse May Be Good for Your Health.