Play it again, Ken final. The 1980s. In some respects, the popular culture of the 1980s reflected the era’s political conservatism. 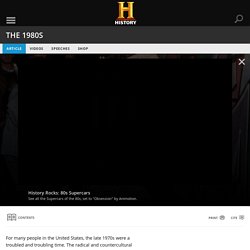 For many people, the symbol of the decade was the “yuppie”: a baby boomer with a college education, a well-paying job and expensive taste. Many people derided yuppies for being self-centered and materialistic, and surveys of young urban professionals across the country showed that they were, indeed, more concerned with making money and buying consumer goods than their parents and grandparents had been. However, in some ways yuppiedom was less shallow and superficial than it appeared.

Popular television shows like “thirtysomething” and movies like “The Big Chill” and “Bright Lights, Big City” depicted a generation of young men and women who were plagued with anxiety and self-doubt. Market Crashes: The Crash of 1987. By Andrew Beattie When: October 19, 1987 Where: The amount the market declined from peak to bottom: 508.32 points, 22.6%, or $500 billion lost in one day. 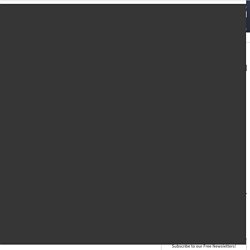 The largest one-day percentage drop in history. Alexander Solzhenitsyn Biography. Alexander Isayevich Solzhenitsyn was born on December 11, 1918, in the spa town of Kislovodsk in the North Caucausus mountains. 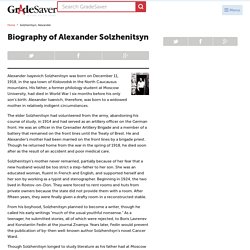 His father, a former philology student at Moscow University, had died in World War I six months before his only son's birth. Alexander Isaevich, therefore, was born to a widowed mother in relatively indigent circumstances. The elder Solzhenitsyn had volunteered from the army, abandoning his course of study, in 1914 and had served as an artillery officer on the German front. He was an officer in the Grenadier Artillery Brigade and a member of a battery that remained on the front lines until the Treaty of Brest. Humanistic psychology. Humanistic psychology is a psychological perspective which rose to prominence in the mid-20th century in response to the limitations of Sigmund Freud's psychoanalytic theory and B.F. 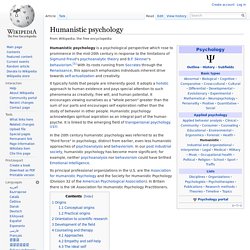 Skinner's behaviorism.[1] With its roots running from Socrates through the Renaissance, this approach emphasizes individuals inherent drive towards self-actualization and creativity. It typically holds that people are inherently good. It adopts a holistic approach to human existence and pays special attention to such phenomena as creativity, free will, and human potential. It encourages viewing ourselves as a "whole person" greater than the sum of our parts and encourages self exploration rather than the study of behavior in other people.

Existentialism Here and Now. Summer 1984 By Alfie Kohn TWENTY-FIVE YEARS ago, existentialism was a hot piece of intellectual property. 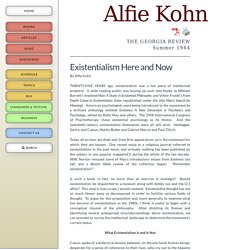 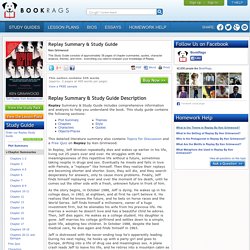 This study guide contains the following sections: Second Chances : Emory Magazine. Ken Grimwood himself, as seen in the 1962 Campus yearbook The college years are a time of momentous change. 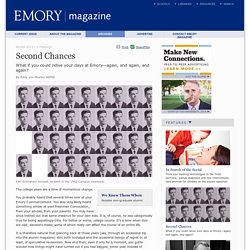 You probably heard that several times over at your Emory Commencement. You also very likely heard something similar at your freshman Convocation, from your adviser, from your parents. You may have since trotted out that same chestnut for your own kids. Ken Grimwood. Background[edit] Grimwood was born in Dothan, Alabama. 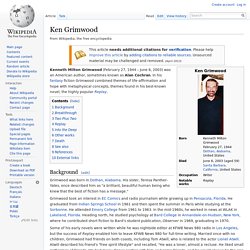 His sister, Teresa Panther-Yates, once described him as "a brilliant, beautiful human being who knew that the best of fiction has a message. " Grimwood took an interest in EC Comics and radio journalism while growing up in Pensacola, Florida. He graduated from Indian Springs School in 1961 and then spent the summer in Paris while studying at the Sorbonne. He attended Emory College from 1961 to 1963. Some of his early novels were written while he was nightside editor at KFWB News 980 radio in Los Angeles, but the success of Replay enabled him to leave KFWB News 980 for full-time writing. Breakthrough[edit] Dharma Literature: Reincarnation, Karma, and Ken Grimwood’s “Replay” - One City. Reincarnation as a theme does not lend itself easily to discussion or literary treatment. 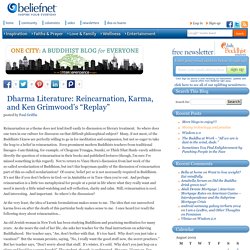 So where does one turn in our culture for discourse on that difficult philosophical subject? Literary Theory and Schools of Criticism. Summary: This resource will help you begin the process of understanding literary theory and schools of criticism and how they are used in the academy. 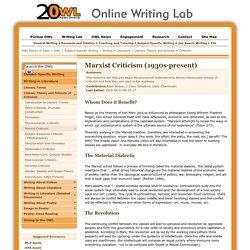 Contributors:Allen Brizee, J. Case Tompkins, Libby ChernouskiLast Edited: 2010-04-21 08:25:17 Whom Does it Benefit? New Documents Reveal How a 1980s Nuclear War Scare Became a Full-Blown Crisis. During 10 days in November 1983, the United States and the Soviet Union nearly started a nuclear war. Newly declassified documents from the CIA, NSA, KGB, and senior officials in both countries reveal just how close we came to mutually assured destruction — over a military exercise. That exercise, Able Archer 83, simulated the transition by NATO from a conventional war to a nuclear war, culminating in the simulated release of warheads against the Soviet Union.