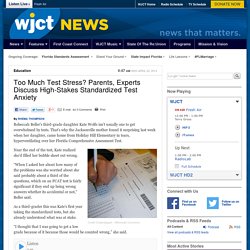 That’s why the Jacksonville mother found it surprising last week when her daughter, came home from Holiday Hill Elementary in tears, hyperventilating over her Florida Comprehensive Assessment Test. Near the end of the test, Kate realized she’d filled her bubble sheet out wrong. “When I asked her about how many of the problems was she worried about she said probably about a third of the questions, which on an FCAT test is fairly significant if they end up being wrong answers whether its accidental or not,” Beller said. As a third-grader this was Kate’s first year taking the standardized tests, but she already understood what was at stake. “I thought that I was going to get a low grade because of it because those would be counted wrong,” she said. Too Much Test Stress? As a parent and a former teacher, Couch said she’s watched high-stakes testing stress take its toll on students many times before. Is Standardized Testing Failing Our Kids? For many families, awaiting the results of a child's yearly test has become just another rite of passage. 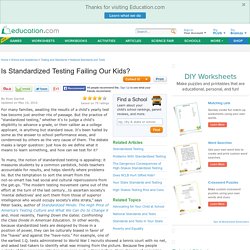 But the practice of “standardized testing,” whether it's to judge a child's eligibility to advance a grade, or their caliber as a college applicant, is anything but standard issue. It's been hailed by some as the answer to school performance woes, and condemned by others as the very cause of them.

The debate masks a larger question: just how do we define what it means to learn something, and how can we test for it? To many, the notion of standardized testing is appealing: it measures students by a common yardstick, holds teachers accountable for results, and helps identify where problems lie. Standardized tests are killing our students' creativity, desire to learn. By Don Batt Posted: 03/10/2013 12:01:00 AM MST Third-grader Royce Hill takes a peek at a mock CSAP test at Stedman Elementary School in Denver. 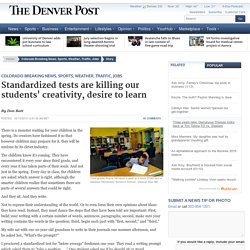 (Denver Post file) There is a monster waiting for your children in the spring. Its creators have fashioned it so that however children may prepare for it, they will be undone by its clever industry. Assessment and Accommodations. By Stephen D. 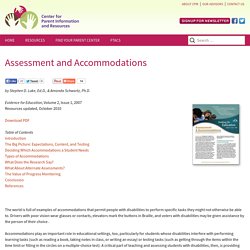 Luke, Ed.D., & Amanda Schwartz, Ph.D. Evidence for Education, Volume 2, Issue 1, 2007 Resources updated, October 2010 Download PDF Table of ContentsIntroductionThe Big Picture: Expectations, Content, and TestingDeciding Which Accommodations a Student NeedsTypes of AccommodationsWhat Does the Research Say? What About Alternate Assessments? The world is full of examples of accommodations that permit people with disabilities to perform specific tasks they might not otherwise be able to. Accommodations play an important role in educational settings, too, particularly for students whose disabilities interfere with performing learning tasks (such as reading a book, taking notes in class, or writing an essay) or testing tasks (such as getting through the items within the time limit or filling in the circles on a multiple-choice test). But what accommodations are appropriate for which students? Back to top. 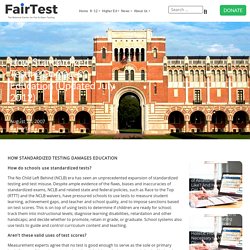 The No Child Left Behind (NCLB) era has seen an unprecedented expansion of standardized testing and test misuse. Despite ample evidence of the flaws, biases and inaccuracies of standardized exams, NCLB and related state and federal policies, such as Race to the Top (RTTT) and the NCLB waivers, have pressured schools to use tests to measure student learning, achievement gaps, and teacher and school quality, and to impose sanctions based on test scores.

This is on top of using tests to determine if children are ready for school; track them into instructional levels; diagnose learning disabilities, retardation and other handicaps; and decide whether to promote, retain in grade, or graduate. School systems also use tests to guide and control curriculum content and teaching. Aren't these valid uses of test scores? Measurement experts agree that no test is good enough to serve as the sole or primary basis for any of these important educational decisions.