Hurlburt heavey 2001. A Companion to Descartes. Cartographies of the Mind: Philosophy and Psychology in Intersection. Know Thyself: It May Be An Impossible Maxim. Know thyself. 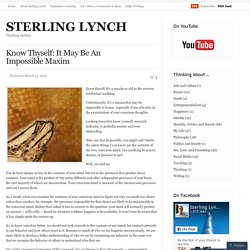 It’s a maxim as old as the western intellectual tradition. Unfortunately, it’s a maxim that may be impossible to honor, especially if you rely only on the examination of your conscious thoughts. Looking inward to know yourself, research indicates, is probably useless and even misleading. How can that be possible, you might ask? Surely, the surest things I can know are the contents of my own conscious mind. Well, yes and no. You do have unique access to the contents of your mind, but not to the processes that produce those contents.

As a result, when you examine the contents of your conscious mind to figure out why you made one choice rather than another, for example, the processes responsible for that choice are likely to be unknowable to the conscious mind. So, to know ourselves better, we should not look inwards to the contents of our minds but instead outwards to our behavior and how others react to it. Like this: Like Loading... The Cognitive Neuroscience of Metacognition. Naive1. Hesitant. Intrsospective Humility web. Consciousness. 1. 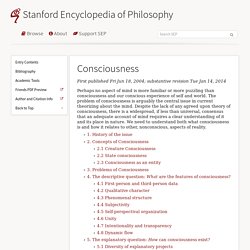 History of the issue Questions about the nature of conscious awareness have likely been asked for as long as there have been humans. Neolithic burial practices appear to express spiritual beliefs and provide early evidence for at least minimally reflective thought about the nature of human consciousness (Pearson 1999, Clark and Riel-Salvatore 2001). Preliterate cultures have similarly been found invariably to embrace some form of spiritual or at least animist view that indicates a degree of reflection about the nature of conscious awareness. Nonetheless, some have argued that consciousness as we know it today is a relatively recent historical development that arose sometime after the Homeric era (Jaynes 1974).

Although the words “conscious” and “conscience” are used quite differently today, it is likely that the Reformation emphasis on the latter as an inner source of truth played some role in the inward turn so characteristic of the modern reflective view of self. 2. Sentience. 3. 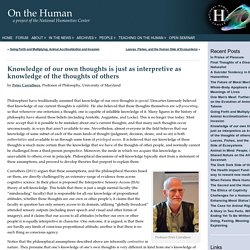 Descartes famously believed that knowledge of our current thoughts is infallible. He also believed that those thoughts themselves are self-presenting, so that whenever one entertains a thought, one is capable of infallible knowledge of it. Many figures in the history of philosophy have shared these beliefs (including Aristotle, Augustine, and Locke). This is no longer true today. Most now accept that it is possible to be mistaken about one’s current thoughts, and that many such thoughts occur unconsciously, in ways that aren’t available to one.

Professor Peter Carruthers Carruthers (2011) argues that these assumptions, and the philosophical theories based on them, are directly challenged by an extensive range of evidence from across cognitive science. Notice that the philosophical assumptions described above are inherently contrastive in nature. References Carruthers, P. (2011). 09 metacog. 5. Philosophy and Basic Beliefs. The word "philosophy" comes from two roots, "philo" and "Sophia," which mean "love" and "Wisdom. 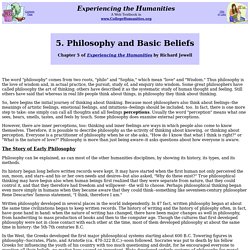 " Thus philosophy is the love of wisdom and, in actual practice, the pursuit, study of, and enquiry into wisdom. Some great philosophers have called philosophy the art of thinking; others have described it as the systematic study of human thought and feeling. Still others have said that whereas in real life people think about things, in philosophy they think about thinking. So, here begins the initial journey of thinking about thinking. Because most philosophers also think about feelings--the meanings of artistic feelings, emotional feelings, and intuitions--feelings should be included, too.

However, there are inner perceptions, too: thinking and inner feelings are ways in which people also come to know themselves. The Story of Early Philosophy Philosophy can be explained, as can most of the other humanities disciplines, by showing its history, its types, and its methods. Modern Philosophy 1. Problems from Philosophy. Nietzsche and the Problem of Subjectivity.