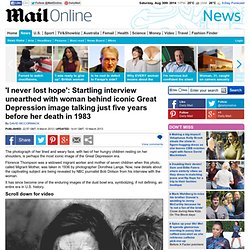 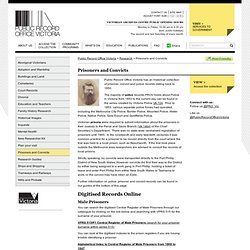 The majority of police records PROV holds about Police in Victoria from 1853 to the current day can be found in the series created by Victoria Police VA 724. Prior to 1853, various separate police forces had operated, including the Melbourne City Police, Border Police, Mounted Police, Water Police, Native Police, Gold Escort and Goldfields Police. Victorian prisons were required to submit information about the prisoners in their custody to the Penal and Gaols Branch (VA 1464) of the Chief Secretary’s Department.

There was no state-wide centralised registration of prisoners until 1985. In the nineteenth and early twentieth centuries it was common practice for a prisoner to be moved directly from the court where the trial was held to a local prison, such as Beechworth. Male Prisoners Alphabetical Index to Central Register of Male Prisoners from 1868 to 1947 Female prisoners. Photojournalism. Photojournalism is a particular form of journalism (the collecting, editing, and presenting of news material for publication or broadcast) that creates images in order to tell a news story. 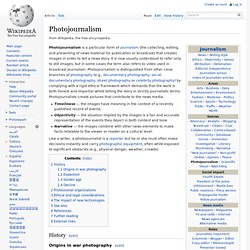 Like a writer, a photojournalist is a reporter but he or she must often make decisions instantly and carry photographic equipment, often while exposed to significant obstacles (e.g., physical danger, weather, crowds). History[edit] Duchenne de Boulogne. Guillaume-Benjamin-Amand Duchenne (de Boulogne) (September 17, 1806, in Boulogne-sur-Mer – September 15, 1875, in Paris) was a French neurologist who revived Galvani's research and greatly advanced the science of electrophysiology. 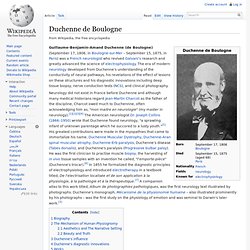 The era of modern neurology developed from Duchenne's understanding of the conductivity of neural pathways, his revelations of the effect of lesions on these structures and his diagnostic innovations including deep tissue biopsy, nerve conduction tests (NCS), and clinical photography. Biography[edit] Albumen print archived at the National Library of Medicine in Bethesda. Duchenne's colleagues appended "de Boulogne" to his name to avoid confusion with the like-sounding name of Édouard-Adolphe Duchesne (1804–1869) who was a popular society physician in Paris.[5] Great Depression. USA annual real GDP from 1910–60, with the years of the Great Depression (1929–1939) highlighted. 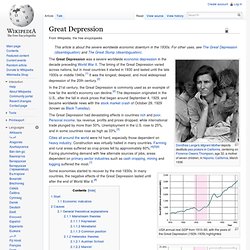 The unemployment rate in the US 1910–1960, with the years of the Great Depression (1929–1939) highlighted. In the 21st century, the Great Depression is commonly used as an example of how far the world's economy can decline.[2] The depression originated in the U.S., after the fall in stock prices that began around September 4, 1929, and became worldwide news with the stock market crash of October 29, 1929 (known as Black Tuesday). The Great Depression had devastating effects in countries rich and poor. File:Lange-MigrantMother02.jpg. Dorothea Lange. Dorothea Lange (May 26, 1895 – October 11, 1965) was an influential American documentary photographer and photojournalist, best known for her Depression-era work for the Farm Security Administration (FSA). 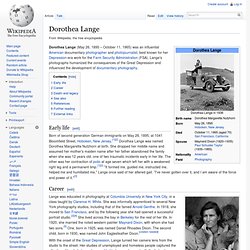 Lange's photographs humanized the consequences of the Great Depression and influenced the development of documentary photography. Early life[edit] Born of second generation German immigrants on May 26, 1895, at 1041 Bloomfield Street, Hoboken, New Jersey,[1][2] Dorothea Lange was named Dorothea Margaretta Nutzhorn at birth. She dropped her middle name and assumed her mother's maiden name after her father abandoned the family when she was 12 years old, one of two traumatic incidents early in her life. The other was her contraction of polio at age seven which left her with a weakened right leg and a permanent limp.[1][2] "It formed me, guided me, instructed me, helped me and humiliated me," Lange once said of her altered gait. Career[edit] Death and legacy[edit] See also[edit]

In 1960, Lange spoke about her experience taking. 18581083. Dorothea Lange's "Migrant Mother" Photographs in the Farm Security Administration Collection: An Overview. The photograph that has become known as "Migrant Mother" is one of a series of photographs that Dorothea Lange made of Florence Owens Thompson and her children in February or March of 1936 in Nipomo, California. 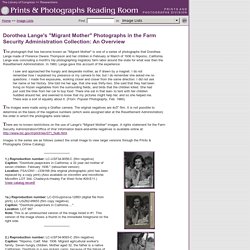 Lange was concluding a month's trip photographing migratory farm labor around the state for what was then the Resettlement Administration. In 1960, Lange gave this account of the experience: I saw and approached the hungry and desperate mother, as if drawn by a magnet. I do not remember how I explained my presence or my camera to her, but I do remember she asked me no questions.

I made five exposures, working closer and closer from the same direction. The images were made using a Graflex camera. There are no known restrictions on the use of Lange's "Migrant Mother" images. Images in the series are as follows (select the small image to view larger versions through the Prints & Photographs Online Catalog): Contemporary Publications in Which "Migrant Mother" Was Featured: Florence Owens Thompson. Florence Owens Thompson (September 1, 1903 – September 16, 1983), born Florence Leona Christie, was the subject of Dorothea Lange's photo Migrant Mother (1936), an iconic image of the Great Depression. 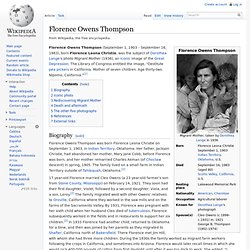 The Library of Congress entitled the image, "Destitute pea pickers in California. Mother of seven children. Age thirty-two. Nipomo, California. Biography[edit] Migrant Madonna. Portraits, Not Mugshots. Rina and Ali, the boombastic team at KALW Informant, alerted me to a set of portraits from 1920′s Australia of individuals categorised as criminals. 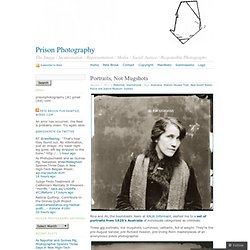 These are portraits, not mugshots. Luminous, cathartic, full of weight. They’re the pre-August Sander, pre-Richard Avedon, pre-Irving Penn masterpieces of an anonymous police photographer. The collection is very similar to a set of mugshots from the archives of the Louisiana Division/City Archives in New Orleans. All images from the Historic Houses Trust website and the New South Wales Police Archives, Sydney. Like this: Like Loading... Stallabrass on Salgado noted. Sekula-collection-notes-v2. Women's mug shots from 1920s Australia. By Daily Mail Reporter Updated: 20:50 GMT, 21 February 2012 They were some of Australia's shadiest sheilas. 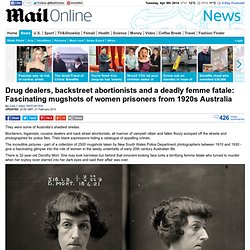 Murderers, bigamists, cocaine dealers and back street abortionists, all manner of vampish villain and fallen floozy scooped off the streets and photographed for police files. Their blank expressions hiding a catalogue of appalling crimes. The incredible pictures - part of a collection of 2500 mugshots taken by New South Wales Police Department photographers between 1910 and 1930 - give a fascinating glimpse into the role of women in the seedy underbelly of early 20th century Australian life. There is 32-year-old Dorothy Mort. 2103393-11D014E9000005DC-339_964x812. The Shooting Gallery - 4oD. Critique of Documentary Realism (1) Documentary Photography: The Paradox of Reality.

In the context of new ways of producing, disseminating and reading photographic images, it is increasingly difficult to establish precise borders or frontiers among the types, techniques, interpretations, intentions or readings of photography. When we speak of documentary work, of which photographs are we not speaking? Does an image lose its documentary character because of the simple fact that it has been constructed? How can we establish the basic characteristics that define documentary photography? Has concerned photography a future? Photojournalism, humanitarianism, responsibility. For a long time I have argued that ‘photojournalism’ – that broad swathe of photographic practice that tells visual stories about the world, and which can include documentary, editorial, news or social photography – has a particular responsibility and a particular opportunity to both represent the world better and make better worlds imaginable.

It is a sensibility that shares much with Cornell Capa’s desire, articulated in his 1968 anthology The Concerned Photographer, for “images in which genuine human feeling predominates over commercial cynicism or disinterested formalism.” In 2005 I gave the Sem Presser Lecture at the World Press Photo awards, with the same title as this post. It was a chance for me to pull together many of the theoretical, political and practical issues implicated in the production of “concerned” photographs. World Press Photo once had plans to publish the Sem Presser lectures in a volume, but nothing ever came of those. Sem Presser Lecture 2005 – text. "Photography after the End of Documentary Realism: Zwelethu Mthethwa's Color Photographs" One major critique of documentary realism at the height of apartheid in South Africa was its overdependence on dehumanizing spectacle, and that from this concern emerged the icon of the victim. For its critics, especially black artists such as Zwelethu Mthethwa, documentary photography was always at the ready to link the iconic and the impoverished with little recourse to examining its effects on social lives.

Because of this, documentary photography in turn generated an iconographic landscape that trafficked in simplifications, in which moral truths were posited without the benefit of proven ethical engagement. In a sense, photography suffered from myopia. Many Artists, writers, and photographers alike have wrestled with this critique. As have the audiences of South African art and literature. Social Documentary Photography. Kevin Carter. Early life[edit] Kevin Carter was born in Johannesburg, South Africa. Kevin Carter grew up in a middle-class, whites-only neighbourhood. As a child, he occasionally saw police raids to arrest blacks who were illegally living in the area. He said later that he questioned how his parents, a Catholic, "liberal" family, could be what he described as 'lackadaisical' about fighting against apartheid.[1] After high school, Carter dropped out of his studies to become a pharmacist and was drafted into the Army.

Early work[edit] Carter had started to work as a weekend sports photographer in 1983. Carter was the first to photograph a public execution "necklacing" by black Africans in South Africa in the mid-1980s.