Defending Transhumanism. The blog Rationally Speaking has just posted two articles about the transhumanist movement, one by Julia Galef that defends transhumanism, and another by Massimo Pigliucci that dismisses transhumanism as “irrelevant,” among other things. 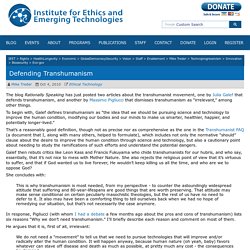 To begin with, Galef defines transhumanism as “the idea that we should be pursuing science and technology to improve the human condition, modifying our bodies and our minds to make us smarter, healthier, happier, and potentially longer-lived.” That’s a reasonably good definition, though not as precise nor as comprehensive as the one in the Transhumanist FAQ (a document that I, along with many others, helped to formulate), which includes not only the normative “should” clause about the desire to improve the human condition through science and technology, but also a cautionary point about needing to study the ramifications of such efforts and understand the potential dangers.

She concludes with: He argues that it is, first of all, irrelevant: In defense of transhumanism. A technician prepares a flow cell slide for loading onto a human DNA sequencing machine at a laboratory in New York. 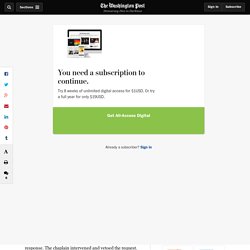 (REUTERS/Mike Segar) Each week, In Theory takes on a big idea in the news and explores it from a range of perspectives. This week, we’re talking about transhumanism. Need a primer? Catch up here. David Vincent Kimel is a doctoral student at Yale in the history department and the founder of Yale Students and Scholars for the Study of Transhumanism. When I first tried to start a club for the study of transhumanism at Yale, I was astounded by the university’s response. Opinions in-theory Orlando Shooting Updates News and analysis on the deadliest mass shooting in U.S. history. post_newsletter348 follow-orlando true after3th false In Theory newsletter Emerging ideas and arguments behind the news. Please provide a valid email address. Eventually, the chaplain was overruled.

[Transhumanists are searching for a dystopian future] Explore these other perspectives: Charles T. James J. Transhumanism. For the last several decades, a strange liberation movement has grown within the developed world. 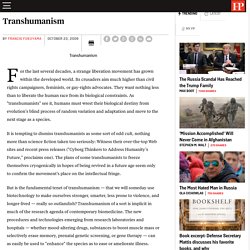 Its crusaders aim much higher than civil rights campaigners, feminists, or gay-rights advocates. They want nothing less than to liberate the human race from its biological constraints. As "transhumanists" see it, humans must wrest their biological destiny from evolution’s blind process of random variation and adaptation and move to the next stage as a species. It is tempting to dismiss transhumanists as some sort of odd cult, nothing more than science fiction taken too seriously: Witness their over-the-top Web sites and recent press releases ("Cyborg Thinkers to Address Humanity’s Future," proclaims one). The plans of some transhumanists to freeze themselves cryogenically in hopes of being revived in a future age seem only to confirm the movement’s place on the intellectual fringe. The Political Vacuity of Transhumanism – Stanford Political Journal.

As a foremost representative for a school of thought that prides itself in its philosophical features, it is ironic that the famed transhumanist Zoltan Istvan committed a logical error in the first minute of his turn of a debate hosted by the Stanford Transhumanist Association: the false dichotomy. 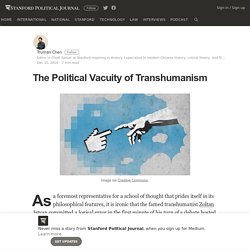 Istvan, the 2016 presidential candidate for the newly formed Transhumanist Party, used a thought experiment: Imagine a world without science and technology, no vaccines, no planes, nothing. Living in such a world sounds unappealing, ergo technological progress is an inherent moral and social good. For further supporting evidence, he argued that we “cannot argue against statistics” and that technology has “changed the lives of all of us” by extending life expectancies, giving us convenient social networks, helping us get around, and so on and so forth (emphasis mine).

“The problem is with the robotic hearts, they cost 200K, so who’s going to get them first? Transhumanism: Yearning to transcend biology - Editorials & Commentary - International Herald Tribune. Brave New World: Plot Overview. The novel opens in the Central London Hatching and Conditioning Centre, where the Director of the Hatchery and one of his assistants, Henry Foster, are giving a tour to a group of boys. 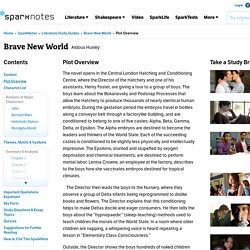 The boys learn about the Bokanovsky and Podsnap Processes that allow the Hatchery to produce thousands of nearly identical human embryos. During the gestation period the embryos travel in bottles along a conveyor belt through a factorylike building, and are conditioned to belong to one of five castes: Alpha, Beta, Gamma, Delta, or Epsilon. The Alpha embryos are destined to become the leaders and thinkers of the World State. Each of the succeeding castes is conditioned to be slightly less physically and intellectually impressive. The Epsilons, stunted and stupefied by oxygen deprivation and chemical treatments, are destined to perform menial labor.