Persuasive Essay: Should Cell Phone be Allowed in School?

Cell Phones in School. Texting in the Classroom: Not Just a Distraction. The Pew Research Center released new data this week on Americans' text-messaging habits. 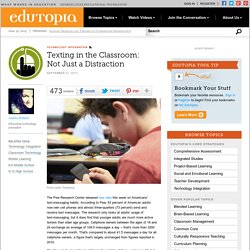 According to Pew, 83 percent of American adults now own cell phones and almost three-quarters (73 percent) send and receive text messages. The research only looks at adults' usage of text-messaging, but it does find that younger adults are much more active texters than older age groups. Cellphone owners between the ages of 18 and 24 exchange an average of 109.5 messages a day -- that's more than 3200 messages per month. That's compared to about 41.5 messages a day for all cellphone owners, a figure that's largely unchanged from figures reported in 2010.

The Pew study doesn't look at the texting habits of those under age 18, but a study released last year by Nielsen found that those cellphone users in the 13 to 17 age range were the most avid texters among any age group. Certainly that age group -- in fact, all those under 18 -- are increasingly likely to be cellphone owners. 5 Reasons to Allow Students to Use Cell Phones in Class. This morning, a discussion between members of my PLN on Plurk got me thinking about rules in school that ban cell phone usage. 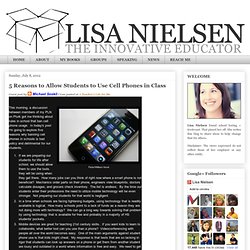 In today's post I'm going to explore five reasons why banning cell phones in schools is bad policy and detrimental for our students. If we are preparing our students for life after school, we should allow them to use the tools they will be using when they get there. How many jobs can you think of right now where a smart phone is not beneficial? Mechanics order parts on their phone, engineers view blueprints, doctors calculate dosages, and grocers check inventory. The list is endless. For those who have read the Harry Potter books or seen the movies, a member of my PLN showed drew a great parallel between events in those stories and this debate with the following quote: "Children, put away your wands. 10 Reasons Cell Phones Should Be Allowed In Schools. Vicki Davis shares 10 reasons cell phones should be allowed in schools. 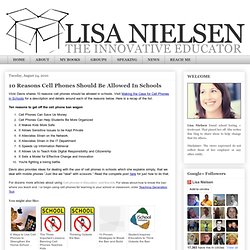 Visit Making the Case for Cell Phones in Schools for a description and details around each of the reasons below. Here is a recap of the list. Ten reasons to get off the cell phone ban wagon Cell Phones Can Save Us MoneyCell Phones Can Help Students Be More OrganizedIt Makes Kids More SafeIt Allows Sensitive Issues to be Kept PrivateIt Alleviates Strain on the Network.It Alleviates Strain in the IT DepartmentIt Speeds Up Information RetrievalIt Allows Us to Teach Kids Digital Responsibility and CitizenshipIt Sets a Model for Effective Change and InnovationYou're fighting a losing battle. Davis also provides ideas for dealing with the use of cell phones in schools which she explains simply, that we deal with mobile phones “Just like we "deal" with scissors.” 11 Real Ways Technology Is Affecting Education Right Now. How Online Education Has Changed In 10 Years 8.44K Views 0 Likes We all know that education, specifically online education, has come a long way in the last few years. 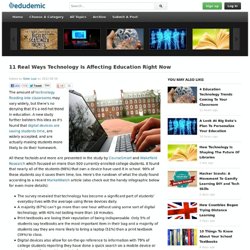 We've already taken a look back - way back - at online education as we rarely think of it (in the 1960's and 70's), but it is also interesting to see just how much online education has evolved in just the more recent past. Why TED Talks Have Become So Popular 6.89K Views 0 Likes TED talks are useful and free ways to bring high-level thinking and through-provoking ideas into the classroom and your home. 5 Things To Know About SXSWedu 5.72K Views 0 Likes The real story for anyone reading this is SXSWedu, the education-oriented version of the conference that's turning into a force of nature. How Social Media Is Used Around The World 8.55K Views 0 Likes In a fascinating infographic, we get a look at how social media is used around the world by a variety of countries. 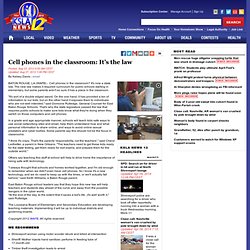 It's now a state law. The new law makes it required curriculum for public schools starting in elementary, but some parents aren't so sure it has a place in the classroom. "It's sort of a double edged sword. On the one hand, it has provided a ton of information to our kids, but on the other hand it exposes them to individuals who are not well intended," said Domoine Rutledge, General Counsel for East Baton Rouge Schools. That's why the state legislature passed the law that requires public schools to make sure kids know what they're doing when they switch on those computers and cell phones. In a grade and age appropriate manner, schools will teach kids safe ways to use social networking sites and email, help them understand how and what personal information to share online, and ways to avoid online sexual predators and cyber bullies.

"I think it's crazy. The Louisiana Board of Elementary and Secondary Education are developing teaching materials.