Bizarre Species of Stingless Bees Depend on a Complex Fungal Community to Survive. Researchers warn that this symbiotic relationship is threatened by the indiscriminate use of pesticides. 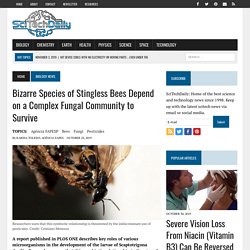 Credit: Cristiano Menezes A report published in PLOS ONE describes key roles of various microorganisms in the development of the larvae of Scaptotrigona depilis. Researchers warn that this symbiotic relationship is threatened by the indiscriminate use of pesticides. A study published in PLOS ONE shows that the larvae of the Brazilian stingless bee Scaptotrigona depilis depend on interactions between three different species of fungus to complete their development and reach adulthood. The complex process of symbiosis was studied by Brazilian and US researchers as part of a Thematic Project supported by FAPESP and the US National Institutes of Health (NIH).

Scientists have now discovered that the brood cells of these bees contain filaments of two other fungi besides Zygosaccharomyces sp.: Candida sp. and Monascus ruber. Robotic spiders to explore the moon. There is no doubt that one of the hallmarks of the modern space age is that it is becoming increasingly democratic. 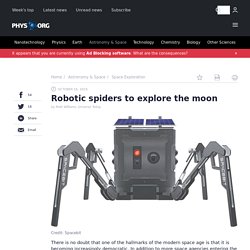 In addition to more space agencies entering the fray, private aerospace companies are contributing like never before. It is no surprise, then, that there are innovators and entrepreneurs that want to increase public access and participation in space exploration. This is what U.K. startup Spacebit and its founder, Pavlo Tanasyuk, hope to accomplish with their decentralized aerospace company. Central to their vision is the Walking Rover, a four-legged robotic explorer that they plan to deploy to the lunar surface in the coming years. This rover will represent a number of firsts for space exploration, which includes being the first commercial lunar mission sent by the U.K. Tanasyuk announced this mission last Thursday (Oct. 10th) at the recent New Scientist Live festival, which was held from Oct. 10th to 13th at London's ExCeL Centre.

This document is subject to copyright. New Harvard Study Proves Why The Bees Are All Disappearing. The human race is really starting to feel the consequences of their actions. 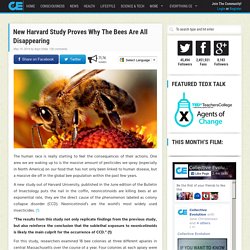 One area we are waking up to is the massive amount of pesticides we spray (especially in North America) on our food that has not only been linked to human disease, but a massive die off in the global bee population within the past few years. A new study out of Harvard University, published in the June edition of the Bulletin of Insectology puts the nail in the coffin, neonicotinoids are killing bees at an exponential rate, they are the direct cause of the phenomenon labeled as colony collapse disorder (CCD). Neonicotinoid’s are the world’s most widely used insecticides. (1) What Bee’s can teach us about the Human Brain.

The human prefrontal cortex is a glorious thing: it tells us where to go and what to do, while still retaining the flexibility to tell us why it was a bad idea to go there and do that after we’ve gone and done it. 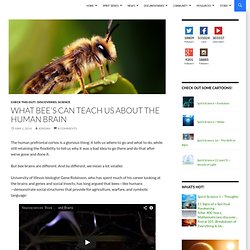 But bee brains are different. And by different, we mean a lot smaller. University of Illinois biologist Gene Robinson, who has spent much of his career looking at the brains and genes and social insects, has long argued that bees—like humans—demonstrate social structures that provide for agriculture, warfare, and symbolic language: Robot Bees Will Be Better Than The Real Thing Says Greenpeace. Natural Blaze NaturalBlaze.com May 8th, 2014 Reader Views: 4,112 by Heather Callaghan No, this is not a tabloid – it’s real. 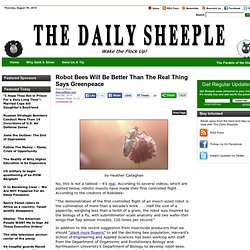 According to several videos, which are posted below, robotic insects have made their first controlled flight. 5 ways to help our disappearing bees. In the spring and summer, thoughts naturally turn to the birds and the bees. 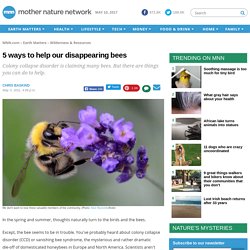 Except, the bee seems to be in trouble. You've probably heard about colony collapse disorder (CCD) or vanishing bee syndrome, the mysterious and rather dramatic die-off of domesticated honeybees in Europe and North America. Scientists aren't really sure what's going on yet. All that's known for sure is our bee colonies are suddenly disappearing. Affected bees simply leave the hive and don't come back, making diagnosis of the problem even more difficult. In some areas, losses of honeybees are reported to be as high as 75 percent. Dennis vanEngelsdorp: a plea for bees. Honeybee Disappearance Threatens Food Crops: 5 Ways to Help. If ever there was evidence of our connection with other living things, it’s the honeybee and the threat its recent disappearing act may pose to the human food supply. 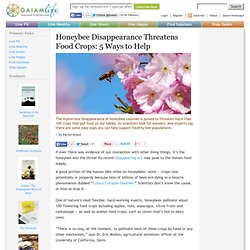 A good portion of the human diet relies on honeybees’ work — crops now potentially in jeopardy because tens of billions of bees are dying in a bizarre phenomenon dubbed “Colony Collapse Disorder.” Scientists don’t know the cause, or how to stop it. One of nature’s most flexible, hard-working insects, honeybees pollinate about 100 flowering food crops including apples, nuts, asparagus, citrus fruits and cantaloupe — as well as animal-feed crops, such as clover that’s fed to dairy cows. “There is no way, at the moment, to pollinate most of these crops by hand or any other mechanism,” says Dr. Eric Mullen, agricultural extension officer at the University of California, Davis.

Apiculturists have testified before Congress about the syndrome, while government and academic labs dig for answers. Bees were in peril before CCD. 1. 2. US approves new pesticides linked to mass bee deaths as EU enacts ban. The continuing mass death of honeybees, known scientifically as Colony Collapse Disorder (CCD) and a pollinator crisis, could well strain production of over 100 crops in the US including apples, zucchinis, avocados and plums. 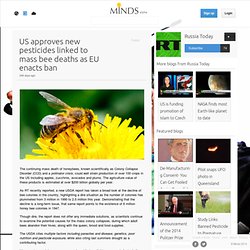 The agriculture value of these products is estimated at over $200 billion globally per year. As RT recently reported, a new USDA report has taken a broad look at the decline of bee colonies in the country, highlighting a dire situation as the number of colonies has plummeted from 3 million in 1990 to 2.5 million this year.