Technology revolutionises 3D printing of prosthetic eyes. Prosthetic eye replacements will be manufactured by 3D printers in the future. 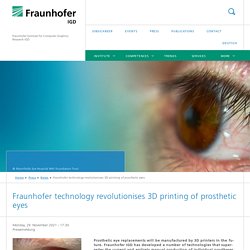 Fraunhofer IGD has developed a number of technologies that supersedes the current and entirely manual production of individual prostheses. Fraunhofer’s Cuttlefish:Eye software utilises a 3D scan of the eye socket and a colour-calibrated photo of the healthy eye, to create the prosthetic eye`s 3D model. Fraunhofer’s Cuttlefish® 3D printing driver is used to print the model on a multicolor, multimaterial 3D printer.

(London/Darmstadt) Not only is a 3D-printed prosthetic eye produced in a fraction of the time taken by the conventional process, but the resulting prosthesis also looks more realistic. This is made possible by the algorithms of Cuttlefish:Eye, a software solution from the Fraunhofer Institute for Computer Graphics Research IGD. Professor Mandeep Sagoo, consultant ophthalmologist at Moorfields, added: “We are excited about the potential for this fully digital eye. Researchers shrink camera to the size of a salt grain - Princeton University School of Engineering and Applied Science. Morning exposure to deep red light improves declining eyesight.

Just three minutes of exposure to deep red light once a week, when delivered in the morning, can significantly improve declining eyesight, finds a pioneering new study by UCL researchers. 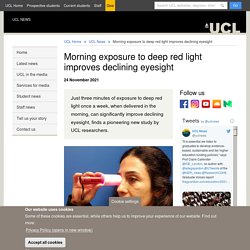 Published in Scientific Reports, the study builds on the team’s previous work*, which showed daily three-minute exposure to longwave deep red light ‘switched on’ energy producing mitochondria cells in the human retina, helping boost naturally declining vision. For this latest study, scientists wanted to establish what effect a single three-minute exposure would have, while also using much lower energy levels than their previous studies. Furthermore, building on separate UCL research in flies** that found mitochondria display ‘shifting workloads’ depending on the time of day, the team compared morning exposure to afternoon exposure. Naturally declining vision and mitochondria Mitochondrial density is greatest in the retina’s photoreceptor cells, which have high energy demands.

Morning and afternoon studies. Young inventors from NUS are the next generation of problem-solvers. The brief is “to design something that solves a problem”. 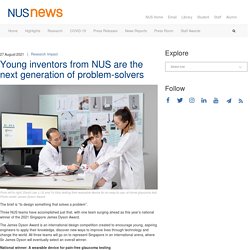 Three NUS teams have accomplished just that, with one team surging ahead as this year’s national winner of the 2021 Singapore James Dyson Award. The James Dyson Award is an international design competition created to encourage young, aspiring engineers to apply their knowledge, discover new ways to improve lives through technology and change the world. All three teams will go on to represent Singapore in an international arena, where Sir James Dyson will eventually select an overall winner. New imaging method gives live glimpse into how cells work. By combining two microscopy methods, EPFL researchers are able to see what is happening inside a cell and on its membrane simultaneously, giving unprecedented insight into the cellular processes that occur during infection, for example. 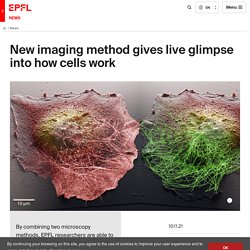 Cells are the fundamental component of living organisms and play host to a number of complex biological phenomena. Researchers need to be able to study these phenomena in detail in order to comprehend certain kinds of disorders and diseases and then develop effective treatments. Resolving chromatic aberration in refracting lenses. Light travels at different speeds based on the medium it passes through. 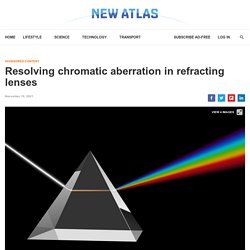 For example, in a vacuum, it travels at 3.0 × 10^8 m/s in a straight line. But when directed towards glass, air, diamond, water, and other mediums, it moves slower. The refractive index is used to show the speed of light in a vacuum in relation to the speed of light in a particular medium. The higher the measure, the slower the light moves in the given medium. Lenses and The Refraction of Light. Global brainstorm to identify Alzheimer’s disease risk. Scientists unite BRAINSTORM unites scientists from CERA, KU Leuven University, Belgium and Umeå University, Sweden and collaborators from University College, London. 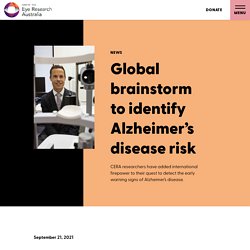 The Victorian Brain Bank at the Florey Institute of Neuroscience and Mental Health and Lions Eye Donation Service will also be involved – providing tissues generously donated by people with Alzheimer’s disease and neuropathological diagnosis in an effort to advance the detection and treatment of the disease. The team will be funded over the next three years by Australia’s National Health and Medical Research Council and the European Union’s Joint Programme in Neurodegenerative Disease Research. Their support for the project recognises how international collaborations drive advances in health and medical research, accelerating progress by pooling skills and resources, and reducing duplication.

Powerful impact *This story first appeared in the CERA Annual Review for 2020. Titanium dioxide: E171 no longer considered safe when used as a food additive. Biomarkers could spell the end of anorexia nervosa. Researchers from the Swinburne Anorexia Nervosa (SWAN) Research Group have discovered what is believed to be the first biomarker for anorexia nervosa. 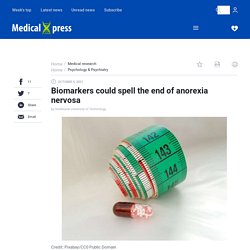 Biomarkers are typically used in the detection and treatment of physical illnesses, but never before have they been used in mental disorders. The challenges of diagnosis Anorexia nervosa is a life-threatening eating disorder that generally begins in early adolescence. It is often secretive and associated with persistent denial of symptoms and resistance to treatment. It has the highest mortality rate of all mental illnesses and low rates of recovery. Xiaomi Unveils Xiaomi Smart Glasses – Mi Blog. The next generation of glowing plants. Using specialized nanoparticles embedded in plant leaves, MIT engineers have created a light-emitting plant that can be charged by an LED. 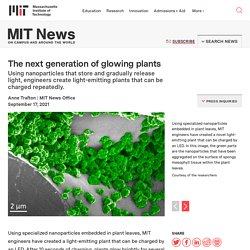 After 10 seconds of charging, plants glow brightly for several minutes, and they can be recharged repeatedly. These plants can produce light that is 10 times brighter than the first generation of glowing plants that the research group reported in 2017. “We wanted to create a light-emitting plant with particles that will absorb light, store some of it, and emit it gradually,” says Michael Strano, the Carbon P. Dubbs Professor of Chemical Engineering at MIT and the senior author of the new study. A contact lens for the ear. According to the German association for the hearing impaired – Deutscher Schwerhörigenbund e.V – some 15 million Germans are hard of hearing. 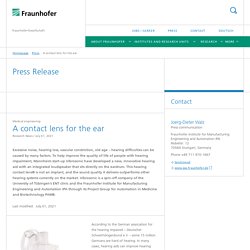 In many cases, hearing aids can improve hearing ability and simplify the day-to-day lives of those affected. With most standard hearing devices, the loudspeaker sits inside the wearer's ear canal. This produces acoustic distortions that can impair sound quality. The microphone is positioned behind the ear where it is susceptible to noise interference such as wind. Home page news - Imaging at the tip of a needle - University of Exeter. Scientists have developed a new technique that could revolutionise medical imaging procedures using light. 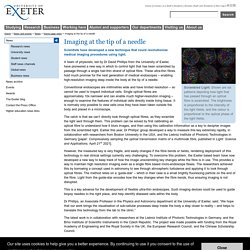 A team of physicists, led by Dr David Phillips from the University of Exeter, have pioneered a new way in which to control light that has been scrambled by passage through a single hair-thin strand of optical fibre. These ultra-thin fibres hold much promise for the next generation of medical endoscopes – enabling high-resolution imaging deep inside the body at the tip of a needle.

Conventional endoscopes are millimetres wide and have limited resolution – so cannot be used to inspect individual cells. Single optical fibres are approximately 10x narrower and can enable much higher-resolution imaging – enough to examine the features of individual cells directly inside living tissue. It is normally only possible to view cells once they have been taken outside the body and placed in a microscope. Let there be light! New tech for night vision - ANU. Researchers from The Australian National University (ANU) have developed new technology that allows people to see clearly in the dark, revolutionising night-vision. The first-of-its-kind thin film, described in a new article published in Advanced Photonics, is ultra-compact and one day could work on standard glasses. The researchers say the new prototype tech, based on nanoscale crystals, could be used for defence, as well as making it safer to drive at night and walking home after dark. One step towards a daily-use deep UV light source for sterilization and disinfection.

Osaka, Japan - Researchers from the Graduate School of Engineering and the Center for Quantum Information and Quantum Biology at Osaka University unveiled a new solid state second-harmonic generation (SHG) device that converts infrared radiation into blue light. Light-shrinking material lets ordinary microscope see in super resolution. June 1, 2021 -- Electrical engineers at the University of California San Diego developed a technology that improves the resolution of an ordinary light microscope so that it can be used to directly observe finer structures and details in living cells. The technology turns a conventional light microscope into what’s called a super-resolution microscope. It involves a specially engineered material that shortens the wavelength of light as it illuminates the sample—this shrunken light is what essentially enables the microscope to image in higher resolution.

> Item Display. In an effort to increase agricultural productivity and limit waste, a team of researchers from the Hebrew University of Jerusalem (HU)’s Robert H. Smith Faculty of Agriculture, Food and Environment developed a method to detect signs of stress before the plant is damaged. Plants are exposed to all types of weather and other external factors that cause harm and impact plants’ ability to undergo photosynthesis and produce fruit. If farmers could get an early warning sign that their plants weren’t doing well, this would help them take measures to protect their produce, prevent significant losses and safeguard national food sources. Researchers see atoms at record resolution. For the First Time, Optogenetic Therapy Partially Restores Patient’s Vision.

But critically, the findings also demonstrate how gene therapies could treat complex neurodegenerative diseases that are caused multiple factors rather than a single genetic fault. Micro-molded ‘ice cube tray’ scaffold is next step in returning sight to injured retinas. The indestructible light beam. 12. April 2021 Researchers at Utrecht University and at TU Wien (Vienna) create special light waves that can penetrate even opaque materials as if the material was not even there. Saarland University. What Does Your Gaze Reveal About You? On the Privacy Implications of Eye Tracking. Covid Tip Sheet: Scientists Use Ultraviolet Light to Disinfect CT Scanners.