These sites are dedicated to Bee Pollinators

Native Bees of North America. Native bees are an unappreciated treasure, with 4,000 species from tiny Perdita to large carpenter bees, they can be found anywhere in North America where flowers bloom. 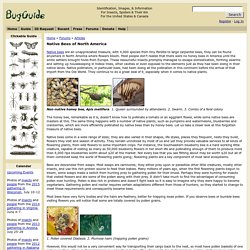 Most people don’t realize that there were no honey bees in America until the white settlers brought hives from Europe. These resourceful insects promptly managed to escape domestication, forming swarms and setting up housekeeping in hollow trees, other cavities or even exposed to the elements just as they had been doing in their native lands. Native pollinators, in particular bees, had been doing all the pollination in this continent before the arrival of that import from the Old World. Honeybees, Farms and the Push to Fix Our Global Food System. 5 Facts About Bumble Bees—and How To Help Them : The National Wildlife Federation Blog. If asked to name a key pollinator in the United States, you’re likely to think first of the honey bee. 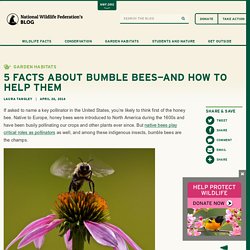 Native to Europe, honey bees were introduced to North America during the 1600s and have been busily pollinating our crops and other plants ever since. Apidae, bumble bees and honey bees: INFORMATION. Diversity The family Apidae is made up of over 25,000 species of bees in 4,000 genera. 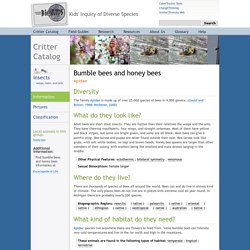 (Gauld and Bolton, 1988; Michener, 2000) What do they look like? Adult bees are short stout insects. They are fuzzier than their relatives the wasps and the ants. Female larger Where do they live? Bees Are Amazing! Honey Bee Facts for Kids - NatureMapping. Honey bee (Apis mellifera) Also known as the European Honey Bee or Western Honey Bee What they look like: Honey bee is a widely distributed flying insect know for its ability to collect nectar from flowers and produce honey. 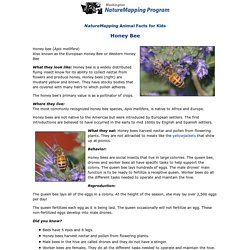 Honey bees (right) are mustard yellow and brown. They have stocky bodies that are covered with many hairs to which pollen adheres. The honey bee's primary value is as a pollinator of crops. Bees - Facts About Bees - Types of Bees - PestWorldforKids.org. Beekeepers use smoke to calm bees when they are collecting honey or relocating a hive.Bees make honey to feed their young and so they have something to eat during the winter.Killer bees have been known to chase people for over a 1/4 mile once they get excited and aggressive.Certain species of bees die after stinging because their stingers, which are attached to their abdomen, have little barbs or hooks on them. 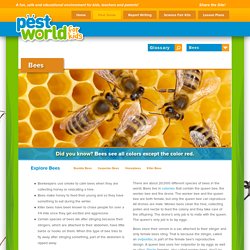 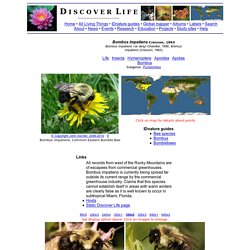 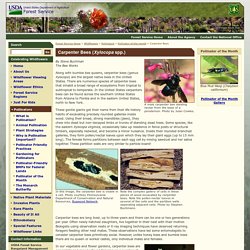 Photo by Juian Cowles. By Steve Buchman The Bee Works. Flower Flies. A female megachile leafcutter bee collecting pollen from a blanketflower (Gaillardia aristata) to use in making a beeloaf. 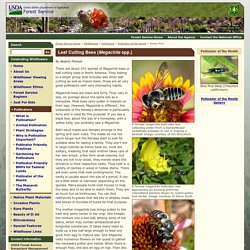 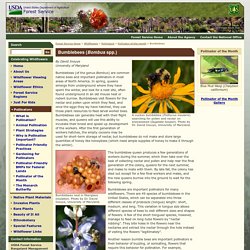 Bumblebees nest in fiberglass insulation. Bombus flavifrons worker on a lupine flower, carrying a small load of orange pollen. The bumblebee queen produces a few generations of workers during the summer, which then take over the task of collecting nectar and pollen and help rear the final generation of the colony, queens for the next summer, and males to mate with them. Bumblebees are important pollinators for many wildflowers. Pollinator Network @ Cornell. By Bryan Danforth Pollination is a valuable service provided by both managed bees (primarily honey bees, Apis mellifera) and wild, native bees. 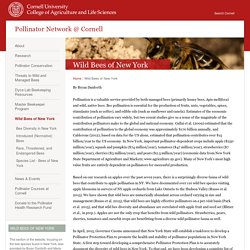 Bee pollination is essential for the production of fruits, nuts, vegetables, spices, stimulants (such as coffee), and edible oils (such as sunflower and canola). Estimates of the economic contribution of pollination vary widely, but two recent studies give us a sense of the magnitude of the contribution pollinators make to the global and national economy. Gallai et al. (2009) estimated that the contribution of pollination to the global economy was approximately $170 billion annually, and Calderone (2012), based on data for the US alone, estimated that pollination contributes over $15 billion/year to the US economy.

Based on our research on apples over the past seven years, there is a surprisingly diverse fauna of wild bees that contribute to apple pollination in NY. References. Pictorial Guide to Common NYC Bees. PBS LearningMedia. Raymond Huber: Meet the Bee: dance, pollination, intelligence, web-links. Honey Bees Honey bees are the most advanced of the 25,000 species of bee. They’re social (they create a home together) and they store food (honey) which means they can survive almost anywhere. 8 fun facts about bees (in TED-Ed GIFs) How much do you know about the tiny, mighty bees? Here are 8 facts worth learning about our formidable friends: BumbleBeeGuideEast2011.

The Xerces Society » Bumble Bee Conservation. Bumble Bee Conservation Bumble bees are important pollinators of wild flowering plants and agricultural crops. They are able to fly in cooler temperatures and lower light levels than many other bees, making them excellent pollinators – especially at higher elevations and latitudes. They also perform a behavior called “buzz pollination,” in which the bee grabs the flower in her jaws and vibrates her wing muscles to dislodge pollen from the flower.