Meet the breeders obsessed with creating remarkable new crops – Experience Magazine. When I reach Avram Drucker on the phone, he’s escaping the blazing Oregon sun for a few minutes. 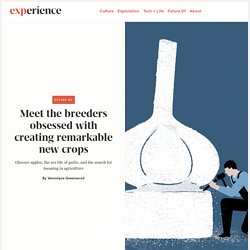 He’s been harvesting garlic, unearthing the heads of various varieties from the farm he runs in the southern Cascades. The garlic he’ll sell at a farmer’s market and online includes the tried and true Silver Rose Silverskin and Polish White varieties. But what we are going to talk about is a new breed of garlic — the breed that Drucker and a friend, over more than five years, coaxed into being by a process so long, intense, and unlikely as to beggar belief. “I’ve been obsessed with garlic for a long time,” he reflects. Most of us give little thought to the domestication of the carrot or the genetics of mesclun lettuce mix.

But out on the edge of the mainstream, independent plant breeders and collectors — a fleet of eccentrics that includes Avram Drucker — are driven by motivations far more esoteric and powerful. The reality, however, is frequently much more chaotic. The Farms of the Future Were Built for Outer Space. Will They Work on Earth? On Mars, we'll all farm underground. 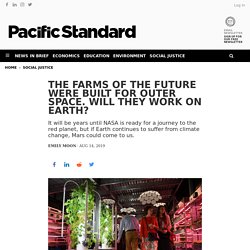 Our crops will grow in a greenhouse, where large, parabolic mirrors focus the sun's weak rays and transmit them through fiber optic cables. We'll harvest vegetables to eat—but also the purified water that evaporates from their leaves. We'll all be vegan, because raising animals for food will be too expensive. And, most importantly, the plants will give us oxygen. "That's the starting point to a whole civilization right there," says Utah State University researcher Bruce Bugbee.

Astronauts going to Mars can eat all the freeze-dried food they're able to ship, but if humans are going to survive on the planet they'll need plants to produce oxygen. Bugbee and his colleagues have been working on all these problems for decades, in a sometimes fantastical bid to support life on Mars (and, in the meantime, on space shuttles). What the astronauts really wanted was something green. When Wheeler started, the term "vertical farming" didn't exist yet. Swine Production. Technological change and vertical integration in the swine industry have resulted in fewer farms producing record amounts of pork. 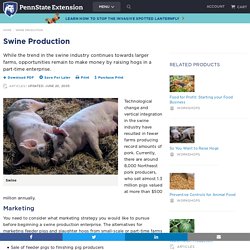 Currently, there are around 8,000 Northeast pork producers, who sell almost 1.3 million pigs valued at more than $500 million annually. Marketing You need to consider what marketing strategy you would like to pursue before beginning a swine production enterprise. The alternatives for marketing feeder pigs and slaughter hogs from small-scale or part-time farms include: Sale of feeder pigs to finishing pig producersLivestock auctionsGraded feeder pig salesSlaughter hog sales to packer buying stationsDirect sales to major packing plantsSmall packers/processorsSpecialty sales direct to consumers Feeder Pig Marketing All of these marketing options are available to feeder pig producers. Marketing feeder pigs through a livestock auction, graded sale, or buying station is another common option. - The Washington Post. Future - The ‘miracle mineral’ the world needs. In Blantyre, Malawi, a group of farmers are assembled around a pile of material that could help shape Africa’s future. 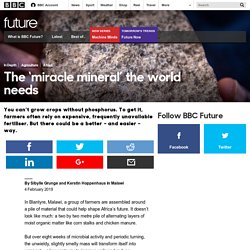 It doesn’t look like much: a two by two metre pile of alternating layers of moist organic matter like corn stalks and chicken manure. But over eight weeks of microbial activity and periodic turning, the unwieldy, slightly smelly mass will transform itself into compost – a low cost way to improve soils and reduce dependency on mineral fertilisers, which are at best expensive and at worst often not available at all. "This is not your ordinary backyard compost pile, where you throw your kitchen scraps," says Johann van der Ham, who runs the demonstration farm, as he watches his students watering the next load of manure in a wheel barrow.

"It's a thermic compost pile. We teach how to build it systematically and to scale it to the needs of every farm. Explore the compost workshop with our 360 video below: “It's a matter of survival.” Fertiliser’s future. Scientists Have 'Hacked Photosynthesis' In Search Of More Productive Crops : The Salt. Scientists have re-engineered photosynthesis, the foundation of life on Earth, creating genetically modified plants that grow faster and bigger. 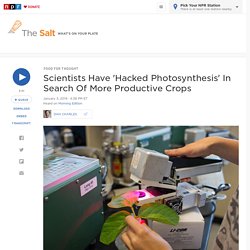 Above, scientists measure how well modified tobacco plants photosynthesize compared to unmodified plants. Haley Ahlers/RIPE Project hide caption toggle caption Haley Ahlers/RIPE Project Scientists have re-engineered photosynthesis, the foundation of life on Earth, creating genetically modified plants that grow faster and bigger. There's a big molecule, a protein, inside the leaves of most plants. Amanda Cavanagh, a biologist and post-doctoral researcher at the University of Illinois, calls herself a big fan of Rubisco. Scientist Amanda Cavanagh snap freezes plant samples with liquid nitrogen to study how the metabolism differs between unmodified plants and plants engineered with alternate pathways for photorespiration.