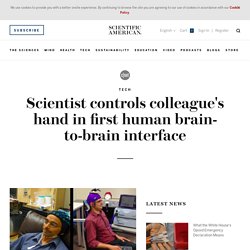 (Credit: University of Washington) A protein in your brain behaves like a virus, infecting your cells with memories. Since childhood, we’ve been warned against germs, helping form a popular opinion that viruses and bacteria are an enemy. 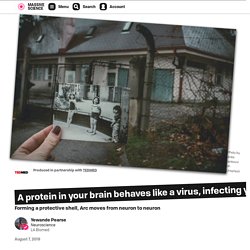 However, new research suggests that may be a mistaken impression. Jason Shepherd, associate professor of neurobiology at the University of Utah Medical School, has been studying how viruses and bacteria have actually helped us to evolve into the complex species we are — and, in fact, may be the key to unlocking potential treatments for a number of brain disorders. Viruses may actually be responsible for the ability to form memories. Shepherd’s research focuses on how our brains encode, store, and retrieve memory, enabling us to learn – and what happens when these processes are disrupted as we age.

Neurons in the brain don’t actually touch; there are gaps between them called synapses, across which signals are transmitted. Integrated Information Theory. Rat brains provide even more evidence our brains operate near tipping point. The human brain doesn't seem like it would have much in common with how water freezes into ice or heats up into a gas. 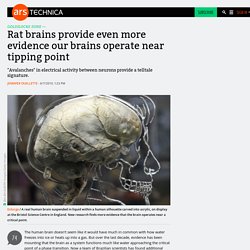 But over the last decade, evidence has been mounting that the brain as a system functions much like water approaching the critical point of a phase transition. Now a team of Brazilian scientists has found additional evidence in rat brains that this might indeed be the case. The team described its findings in a recent paper in Physical Review Letters. Augmented reality changes how people interact and communicate, study finds. Neal Stephenson's influential 1992 sci-fi novel Snow Crash offered a fairly dystopian vision of a future virtual-reality based Internet known as the "Metaverse" and is widely credited with bringing the term “avatar” into mainstream culture. 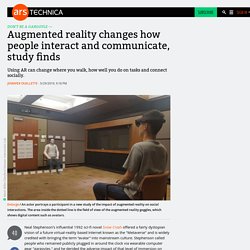 Stephenson called people who remained publicly plugged in around the clock via wearable computer gear "gargoyles," and he derided the adverse impact of that level of immersion on social behavior. "Gargoyles are no fun to talk to," he wrote. Literary Devices: How To Master Alternate Point of View. Alternate Point of View (POV) is a complicated narration form, but, if done the right way, it can make for a captivating read. 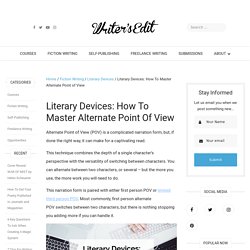 This technique combines the depth of a single character’s perspective with the versatility of switching between characters. You can alternate between two characters, or several – but the more you use, the more work you will need to do. This narration form is paired with either first person POV or limited third person POV. Culture - The 1968 sci-fi that spookily predicted today. We look to fiction for eternal truths about our world and timeless insights into the human condition – either that or giddy escapism. 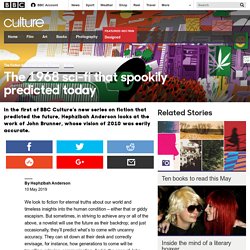 But sometimes, in striving to achieve any or all of the above, a novelist will use the future as their backdrop; and just occasionally, they’ll predict what’s to come with uncanny accuracy. They can sit down at their desk and correctly envisage, for instance, how generations to come will be travelling, relaxing, communicating. And in the case of John Brunner, a sci-fi author who grew up in an era when the word ‘wireless’ still meant radio – the specificity of his imaginings retains its power to startle. More like this: - Inside the mind of a literary hoaxer. Integrated Information Theory of Consciousness. Integrated Information Theory (IIT) offers an explanation for the nature and source of consciousness. 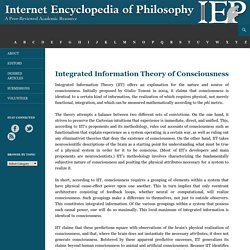 Initially proposed by Giulio Tononi in 2004, it claims that consciousness is identical to a certain kind of information, the realization of which requires physical, not merely functional, integration, and which can be measured mathematically according to the phi metric. The theory attempts a balance between two different sets of convictions. On the one hand, it strives to preserve the Cartesian intuitions that experience is immediate, direct, and unified. This, according to IIT’s proponents and its methodology, rules out accounts of consciousness such as functionalism that explain experience as a system operating in a certain way, as well as ruling out any eliminativist theories that deny the existence of consciousness.

In short, according to IIT, consciousness requires a grouping of elements within a system that have physical cause-effect power upon one another. Future - Are we close to solving the puzzle of consciousness? Can a lobster feel pain in the same way as you or I? We know that they have the same sensors – called nociceptors – that cause us to flinch or cry when we are hurt. And they certainly behave like they are sensing something unpleasant. 5 Fun and Easy Ways to Lengthen Word Count. We see a lot of hype these days about books that are too lengthy for agents or editors to consider. 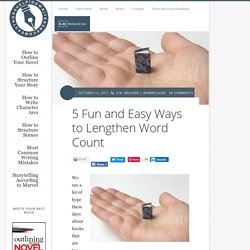 But what about books in which we need to lengthen word count? Max Planck Neuroscience on Nautilus: Understanding the Brain with the Help of Artificial Intelligence. How does consciousness arise? 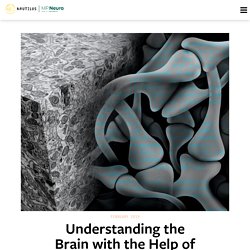 Researchers suspect that the answer to this question lies in the connections between neurons. Unfortunately, however, little is known about the wiring of the brain. Deep Learning Workstation - 2 GPUs: New 2019 Desktop. Bacteria May Live (Harmlessly) in Your Brain. In the latest example of bacteria being "literally everywhere," scientists appear to have found evidence of microbes living harmlessly in our brains. 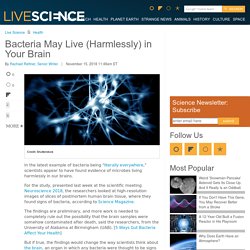 For the study, presented last week at the scientific meeting Neuroscience 2018, the researchers looked at high-resolution images of slices of postmortem human brain tissue, where they found signs of bacteria, according to Science Magazine. A journey into the brain: insight into how bacterial pathogens cross bloodâbrain barriers. Uncanny! Is this humanoid robot a curiosity, or a preview of a post-human world? Aeon email newsletters are issued by the not-for-profit, registered charity Aeon Media Group Ltd (Australian Business Number 80 612 076 614). This Email Newsletter Privacy Statement pertains to the personally identifying information you voluntarily submit in the form of your email address to receive our email newsletters More generally, when visiting the Aeon site you should refer to our site Privacy Policy here. This Email Newsletter Privacy Statement may change from time to time and was last revised 5 June, 2018.

It isn't easy being Elizabeth Koch. Elizabeth Koch is obsessed with the self—not just hers, but yours and mine, too. She’s the founder of a neuroscience nonprofit called the Tiny Blue Dot Foundation, which aims “to understand the nature of consciousness and its place in nature.” There, researchers are working on figuring out the physical processes underlying the mental experience of existence. They’re trying to uncover the mechanics of mind and matter, asking how the two work together to produce a sense of self.

Language matters more than ever in the age of AI. In analytic philosophy, any meaning can be expressed in language. In his book Expression and Meaning (1979), UC Berkeley philosopher John Searle calls this idea “the principle of expressibility, the principle that whatever can be meant can be said”. Moreover, in the Tractatus Logico-Philosophicus (1921), Ludwig Wittgenstein suggests that “the limits of my language mean the limits of my world”. Outside the hermetically sealed field of analytic philosophy, the limits of natural language when it comes to meaning-making have long been recognized in both the arts and sciences. Psychology and linguistics acknowledge that language is not a perfect medium. Use haikus to explain complicated concepts — Quartz at Work.

People love to read about science. How a street artist creates fake glowing neon lights. Why Good Companies Go Bad. One of the most common business phenomena is also one of the most perplexing: when successful companies face big changes in their environment, they often fail to respond effectively. Unable to defend themselves against competitors armed with new products, technologies, or strategies, they watch their sales and profits erode, their best people leave, and their stock valuations tumble. Why the Little Dutch Boy Never Put his Finger in the Dike.

Spirit-Wrestlers Blog: 2018. By Andrei Conovaloff. Researchers are keeping pig brains alive outside the body. Plan for quantum supremacy. It’s Time to Study AI on Its Own Terms. What if physiologists were the only people who study human behavior at all scales: from how the human body functions, to how social norms emerge, to how the stock market functions, to how we create, share, and consume culture?

How algorithms are transforming artistic creativity. Prosthetic memory system successful in humans. Scientists at Wake Forest Baptist Medical Center and the University of Southern California (USC) have demonstrated the successful implementation of a prosthetic system that uses a person's own memory patterns to facilitate the brain's ability to encode and recall memory. In the pilot study, published in today's Journal of Neural Engineering, participants' short-term memory performance showed a 35 to 37 percent improvement over baseline measurements.