How much water goes into producing our food and drink? - in pictures. California Academy of Sciences. Epsom Salt: Benefits, Uses, and Side Effects. Epsom salt is a popular remedy for many ailments. 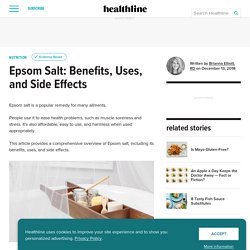 People use it to ease health problems, such as muscle soreness and stress. It’s also affordable, easy to use, and harmless when used appropriately. This article provides a comprehensive overview of Epsom salt, including its benefits, uses, and side effects. What Is Epsom Salt? Epsom salt is also known as magnesium sulfate. It gets its name from the town of Epsom in Surrey, England, where it was originally discovered. Despite its name, Epsom salt is a completely different compound than table salt. It has an appearance similar to table salt and is often dissolved in baths, which is why you may also know it as “bath salt.” Some people still consume it by dissolving the salt in water and drinking it.

For hundreds of years, this salt has been used to treat ailments, such as constipation, insomnia, and fibromyalgia. Most of the reported benefits of Epsom salt are attributed to its magnesium, a mineral that a lot of people do not get enough of. Bath. Salt - Solvay Plastics. College Student Invents “Water You Can Eat” After Dehydrated Grandma Goes To E.R. 10 worst countries for access to clean water. If you are among the 7 out of 10 people on the planet who have clean water available at your home around the clock, count yourself lucky. 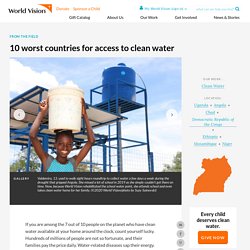 Hundreds of millions of people are not so fortunate, and their families pay the price daily. Water-related diseases sap their energy. Carrying buckets of dirty water for hours prevents moms from earning money and kids from attending school. They don’t have the water they need to irrigate crops or water livestock. And at the end of the day, it’s hard to rest knowing the next day will be the same. These are people who lack basic water service. Let’s count down the 10 countries with the highest percentage of the population lacking basic access to water. 10. In Mozambique, rural populations and people in the north are the worst off for clean water and sanitation. 9. Niger, the largest country in West Africa, is among the world’s poorest countries.

In Niger, World Vision is focused on creating sustainable WASH programs. 8. 7. 6. Do you know your water footprint? Fresh water is a scarce resource on our planet – but how many of us are aware of how much water is needed to make the foods we eat every day? 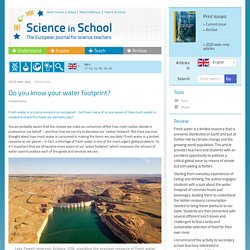 You are probably aware that the choices we make as consumers affect how much carbon dioxide is produced on our behalf – and thus how we can try to decrease our ‘carbon footprint’. But have you ever thought about how much water is consumed in making the items we use daily? Fresh water is a limited resource on our planet – in fact, a shortage of fresh water is one of the most urgent global problems. So it’s important that we all become more aware of our ‘water footprint’, which measures the amount of water used to produce each of the goods and services we use.

Although people are becoming aware of the large volumes of water needed to produce some of the items we wear (such as jeans or cotton T-shirts), there is perhaps less awareness of the huge contribution that food makes to our personal water footprint. The history of the saltworks - Saline royale d'Arc-et-Senans. In 1982, the Arc-et-Senans Royal Saltworks was included on the UNESCO world heritage list. 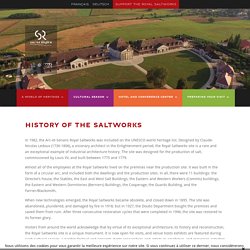 Designed by Claude-Nicolas Ledoux (1736-1806), a visionary architect in the Enlightenment period, the Royal Saltworks site is a rare and an exceptional example of industrial architecture history. The site was designed for the production of salt, commissioned by Louis XV, and built between 1775 and 1779. Almost all of the employees at the Royal Saltworks lived on the premises near the production site. It was built in the form of a circular arc, and included both the dwellings and the production sites. In all, there were 11 buildings: the Director’s house, the Stables, the East and West Salt Buildings, the Eastern and Western Workers (Commis) buildings, the Eastern and Western Dormitories (Berniers) Buildings, the Cooperage, the Guards Building, and the Farrier/Blacksmith.

When new technologies emerged, the Royal Saltworks became obsolete, and closed down in 1895. What is salt used for. Using Resources - Oak National Academy. How to Desalinate Water on a Desert Island. Water safe to drink.