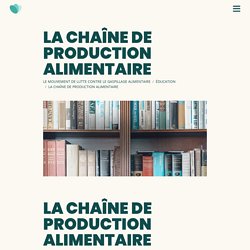 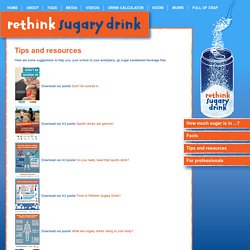 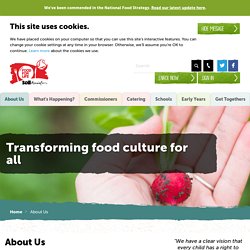 Our School Award supports schools to take a whole school approach that sees them grow their own food; organise trips to farms; provide cooking and growing clubs for pupils and their families; serve freshly prepared, well-sourced meals and provide an attractive dining environment. Our Hospital Leaders team work in partnership with NHS Trusts to promote health and sustainability as well as improving the food experience of patients, staff and visitors. Easy, healthy breakfast & 6 flavor ideas! Cradle to Cradle - Sustainability Guide. Cradle to Cradle (C2C) is about seeing garbage as an eternal resource and doing the right thing from the beginning. 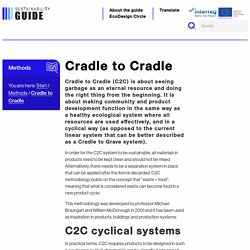 It is about making community and product development function in the same way as a healthy ecological system where all resources are used effectively, and in a cyclical way (as opposed to the current linear system that can be better described as a Cradle to Grave system). In order for the C2C system to be sustainable, all materials in products need to be kept clean and should not be mixed. Alternatively, there needs to be a separation system in place that can be applied after the item is discarded. C2C methodology builds on the concept that “waste = food”, meaning that what is considered waste can become food in a new product cycle. This methodology was developed by professor Michael Braungart and William McDonough in 2001 and it has been used as inspiration in products, buildings and production systems. Biological cycle. Unpasteurized Beer Is Having a Moment. Are food preservatives bad for you? - Eleanor Nelsen.

These days, we have ready access to synthetic preservatives that are inexpensive, effective, and largely safe. 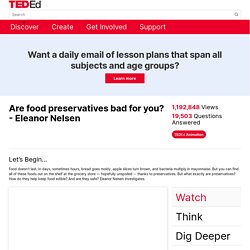 Electric refrigerators and manufacturing techniques like vacuum-sealing go even further in expanding the range of foods we can preserve. But people have been preserving food for thousands of years, using a variety of creative methods. One of the oldest food preservation techniques is pickling, which, as the lesson describes, discourages the growth of bacteria by increasing a food’s acidity. Most modern pickles are made using acetic acid, more commonly known as vinegar. But traditional pickles were produced via fermentation, using lactobacillus to convert sugars to lactic acid. Many fermented foods use fungi like yeasts, which occur naturally in the environment, and inhibit the growth of bacteria by converting sugars to alcohol. 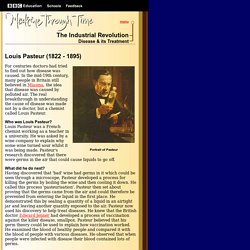 In the mid-19th century, many people in Britain still believed in Miasma, the idea that disease was caused by polluted air. The real breakthrough in understanding the cause of disease was made not by a doctor, but a chemist called Louis Pasteur. Scottish Recipes. Travis rain gap. Travis rain. Destination scotland worksheets. How France is testing free public transport - BBC Worklife.

Bite Back Food Campaign. Bite Back 2030 is a campaign led by British young people aiming to redesign what they call the "food system" to put young people's health first. 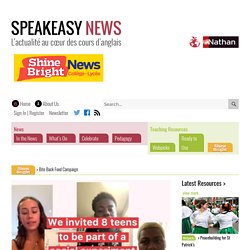 This resource features an eye-opening social experiment the campaign carried out to show volunteers just how much they were influenced by advertising when it came to making food choices. We’re all bombarded with commercials and ads throughout the day - whether it be on screens, social media or in the street — but some ads may have a greater influence on us than we even realise… That’s where the clever strategy of big companies lies! (118) Food labels showing exercise needed to burn calories ‘could help tackle obesity’

Processed Food: What Is the Purpose of Food Processing? Last Updated : 20 March 2017 In a consumer study carried out by EUFIC, we investigated the understanding of processed foods among participants from the UK. 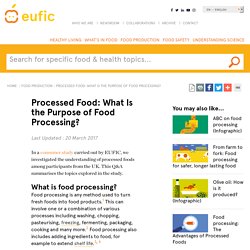 This Q&A summarises the topics explored in the study. Youtube. (102) 7 Egg Dishes, From Octopus Eggs to Ostrich Eggs. Food investigation: conducting experiments. (121) Science protecting consumers from field to fork. (121) EFSA explains risk assessment of food and feed risk. Food Manufacturing Apprenticeships. (110) BEST PITCHES: Levi Roots' Reggae Reggae pitch lures Peter Jones! From reggae to riches: Levi Roots’ story to be made into movie. He found fame and fortune after appearing on the small screen and securing an investment for his Reggae Reggae sauce on Dragons’ Den, but now Levi Roots has inspired leading British film-makers to tell his extraordinary story on the big screen. 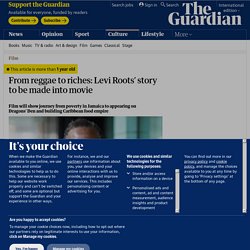 Meg Leonard and Nick Moorcroft, writer-producers of some of the UK’s most successful independent films, are planning a film for cinematic release to tell Roots’ story: how he went from a child in Jamaica who was too poor to buy shoes and could not read and write when he emigrated to Britain aged 11, was later sentenced to nine years in prison for drugs offences, to turning his life around, and building a Caribbean food and drink empire worth £35m following his appearance on Dragons’ Den. Moorcroft said it would be a “life-affirming tale of hopes, dreams and second-chances, all set to an uplifting reggae soundtrack and bathed in Caribbean sunshine”. Leonard described Roots as the “embodiment of triumph over adversity”. Fiche épreuve E3. Bite Back 2030. Loop, a shopping service with reusable packages, wants to end the world’s plastics problem - CNN.com. It’s the early 1960s. Girls are fainting over the Beatles, Sean Connery is James Bond and a revolutionary trend is sweeping the United States: Plastic.

Plastic is about to have its breakthrough moment in the food industry. The plastic milk jug, specifically, is on the brink of taking off: the “market potential is huge,” the New York Times correctly notes. To American families, a third of which are still getting their milk from a milk man, plastic is a wonder package. It’s lighter than glass. Except for the milk man. 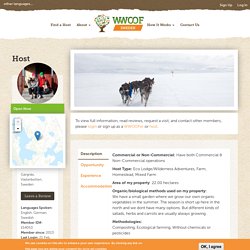 How a group of women saved their island from plastic - BBC Reel. Because it takes a village to achieve and deliver success. What happened after the plastic banThe tiny island of Vanuatu in the South Pacific is waging war on plastic, one piece at a time.Now Playing A simple way to improve your mindA guide showing you how to inspire creative ideas.Watch now WorkBrazil's sisterhood fixing equalityMeet two 'handy girls' who help teach women home maintenance.Watch now SportBarcelona's unique gymBarcelona's Sant Pau gym is a unique, self-managed social experiment.Watch now WorkHow being a rebel can get you aheadHow rule-breaking at work can get you ahead.Watch now. WWOOF Sweden. (193) Why Sweden Loves Food in Tubes. The Scandinavian way to tackle winter - BBC Reel. BBC Reel goes beyond the headlines to see how the Nordic countires are getting their work-life balance correct. EconomyWhy the Swedes love paying their taxesSweden has some of the world's highest taxes, so why is the taxman so popular with the Swedes?

HumansThe Nordic queen with freedom to roamSweden celebrates the right to roam in the country’s nature, and women embrace the tradition alone.Watch now. Shine Bright Terminale. QuiZinière. Quality schemes explained. Aims of EU quality schemes EU quality policy aims at protecting the names of specific products to promote their unique characteristics, linked to their geographical origin as well as traditional know-how. Product names can be granted with a 'geographical indication' (GI) if they have a specific link to the place where they are made. The GI recognition enables consumers to trust and distinguish quality products while also helping producers to market their products better.

Products that are under consideration or have been granted GI recognition are listed in quality product registers. Instagram. Exercise advice on food labels could help to tackle the obesity crisis. Labelling food and drinks with how much walking or running is needed to burn them off could help tackle the obesity crisis, researchers say. While all packaged food must display certain nutritional information, such as calorie content, there is limited evidence that the approach changes what people buy or eat. Meanwhile, waistlines continue to expand. (14) Phrases for expressing an opinion.

(342) Cooking Verbs - English Vocabulary Quiz. (342) Cooking Vocabulary in English - Cooking Verbs. Libmanuels. 5 Movies with Unbelievable Scenes About Interviews - Pro-Group. The thought of a job interview can put even the most seasoned professional into a mild panic. The number of things that can and will go wrong hangs heavy over many people’s preparation.