Reading Materials for the Day

FluentData: A New, Lightweight ORM with a Fluent API. FluentData is a new introduction to the micro-ORM family that aims to be more straightforward to use than full ORMs. 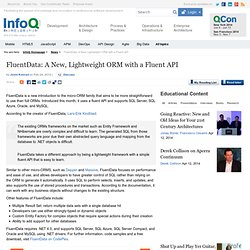 Introduced this month, it uses a fluent API and supports SQL Server, SQL Azure, Oracle, and MySQL. According to the creator of FluentData, Lars-Erik Kindblad: The existing ORMs frameworks on the market such as Entity Framework and NHibernate are overly complex and difficult to learn. The generated SQL from those frameworks are poor due their own abstracted query language and mapping from the database to .NET objects is difficult. Fluent NHibernate. .Net DI Container Speed Test @ PhilipMat. You probably don't care why I've done this, but if you don't even care about most of the details of this test, let me lay it on you short and sweet: Autofac, Castle.Windsor, and StructureMap put out some excellent, consistent numbers; Spring.Net is middle of the road; Ninject is consistently the slowest of the pack by several orders of magnitude; and finally Unity showed such a weird behavior that made me question both the validity of my approach and the sanity of its developers (mostly kidding, ctavares is awesome). 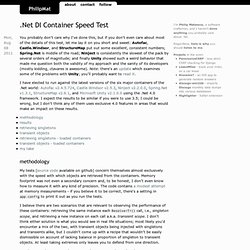 There’s no doubt that object orientation is a mainstream programming paradigm, one that excels when it comes to breaking a system down into components and describing processes through components. 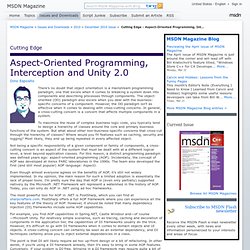 The object-oriented (OO) paradigm also excels when you deal with the business-specific concerns of a component. However, the OO paradigm isn’t as effective when it comes to dealing with cross-cutting concerns. In general, a cross-cutting concern is a concern that affects multiple components in a system. To maximize the reuse of complex business logic code, you typically tend to design a hierarchy of classes around the core and primary business functions of the system. But what about other non-business-specific concerns that cross-cut through the hierarchy of classes? Not being a specific responsibility of a given component or family of components, a cross-cutting concern is an aspect of the system that must be dealt with at a different logical level, a level beyond application classes. Samples. Chapter 2. Beginning With Roo: The Tutorial. Chapter 2. 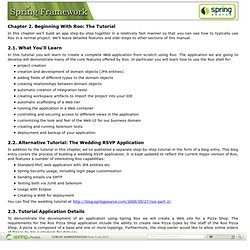 Beginning With Roo: The Tutorial In this chapter we'll build an app step-by-step together in a relatively fast manner so that you can see how to typically use Roo in a normal project. We'll leave detailed features and side-steps to other sections of this manual. In this tutorial you will learn to create a complete Web application from scratch using Roo. The application we are going to develop will demonstrate many of the core features offered by Roo. 2.2. In addition to the tutorial in this chapter, we've published a separate step-by-step tutorial in the form of a blog entry. Standard MVC web application with JPA entities etc Spring Security usage, including login page customisation Sending emails via SMTP Testing both via JUnit and Selenium Usage with Eclipse Creating a WAR for deployment You can find the wedding tutorial at. Refactor! Pro by DevExpress. Refactor! 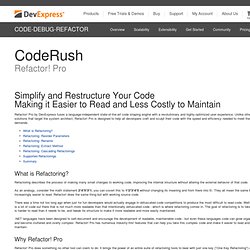 Pro Simplify and Restructure Your Code Making it Easier to Read and Less Costly to Maintain Refactor! Pro by DevExpress fuses a language-independent state-of-the-art code shaping engine with a revolutionary and highly-optimized user experience. Unlike other refactoring solutions that target the system architect, Refactor! What is Refactoring? Refactoring describes the process of making many small changes to working code, improving the internal structure without altering the external behavior of that code.

As an analogy, consider the math statement 2*4*5*3*1, you can covert this to 1*2*3*4*5 without changing its meaning and from there into 5!. There was a time not too long ago when just for fun developers would actually engage in obfuscated code competitions to produce the most difficult to read code. Why Refactor! 10 Steps To Become Better .NET Developer. Here’s a list of things you might want to learn about in order to become a better .NET developer. 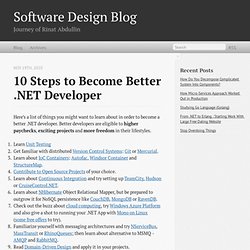 Better developers are eligible to higher paychecks, exciting projects and more freedom in their lifestyles. As you can see, the list is not endless. There are just ten distinct topics structured in the recommended order of learning and practicing. Diligently walking through them is certain to get you way above the level of Senior Developer, opening a whole set of opportunities all around the world. Newsletters.