Why the stupid think they’re smart. Psychologists have shown humans are poor judges of their own abilities, from sense of humour to grammar. 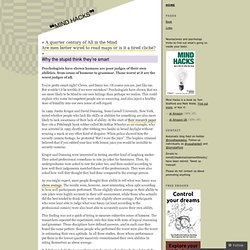 Those worst at it are the worst judges of all. You’re pretty smart right? Clever, and funny too. Of course you are, just like me. But wouldn’t it be terrible if we were mistaken? In 1999, Justin Kruger and David Dunning, from Cornell University, New York, tested whether people who lack the skills or abilities for something are also more likely to lack awareness of their lack of ability. Kruger and Dunning were interested in testing another kind of laughing matter. As you might expect, most people thought their ability to tell what was funny was above average. This finding was not a quirk of trying to measure subjective sense of humour.

It didn’t even help the poor performers to be given a benchmark. In a key final test, Kruger and Dunning trained a group of poor performers in logical reasoning tasks. This is my BBC Future column from last week. Why the stupid think they’re smart. Why you think you're better than everyone else. The congruence bias is why we all jump to conclusions and stay there.

The whole gateway drug thing is so flawed in so many ways. 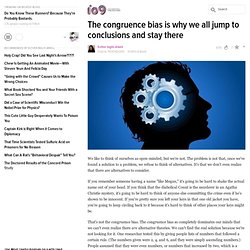 One being that though many people who are smack addicts started with pot, there are also many people that only ever smoke pot and never moved to heroin. What makes a lot more sense is that being a heroin addict would tend to suggest that you are open to trying drugs of all sorts so it stands to reason that you've probably done all kinds of drugs legal and otherwise before you reached the end.

But you know what, even if weed was a gateway drug, so what? How Your Mistakes Can Make You a More Rational Person. The Framing Effect makes people accept deaths and pay fines. I always referred to this as "perceived value". 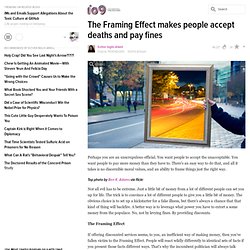 My first hand experience with it is a little convoluted... I was working as an art dealer for a small art gallery in the USA that also sold fine jewelry. Memory Is Inherently Fallible, And That's a Good Thing. How much can you trust your memory? 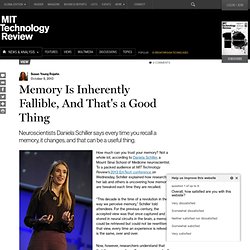 Not a whole lot, according to Daniela Schiller, a Mount Sinai School of Medicine neuroscientist. To a packed audience at MIT Technology Review’s 2013 EmTech conference on Wednesday, Schiller explained how research in her lab and others is uncovering how memories are tweaked each time they are recalled. “This decade is the time of a revolution in the way we perceive memory,” Schiller told attendees. For the previous century, the accepted view was that once captured and stored in neural circuits in the brain, a memory could be retrieved but could not be rewritten.

In that view, every time an experience is relived, it is the same, over and over. Now, however, researchers understand that that the process of recalling a memory actually changes it. La morale, un talent de société*Le Webinet des Curiosités. Enfin une mesure qui fait presque l’unanimité! 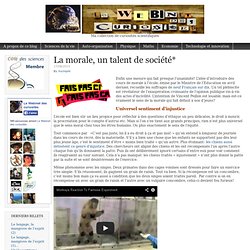 Forer effect. A related and more general phenomenon is that of subjective validation.[1] Subjective validation occurs when two unrelated or even random events are perceived to be related because a belief, expectation, or hypothesis demands a relationship. 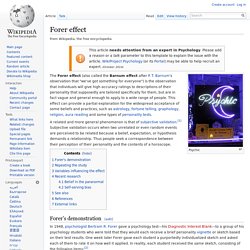 Thus people seek a correspondence between their perception of their personality and the contents of a horoscope. Forer's demonstration[edit] On average, the students rated its accuracy as 4.26 on a scale of 0 (very poor) to 5 (excellent). Madness of Crowds: Single Ants Beat Colonies At Easy Choices. Virtually every article or documentary about ants takes a moment to fawn over their incredible collective achievements. 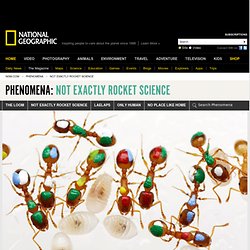 Together, ant colonies can raise gardens and livestock, build living rafts, run vaccination programmes, overpower huge prey, deter elephants, and invade continents. No individual could do any of this; it takes a colony to pull off such feats. But ants can also screw up. Like all animal collectives, they face situations when the crowd’s wisdom turns into foolishness. Takao Sasaki and Stephen Pratt from Arizona State University found one such example among house-hunting Temnothorax ants. But Sasaki showed that this only happens if their choice is difficult. Learned Helplessness. The Misconception: If you are in a bad situation, you will do whatever you can do to escape it. 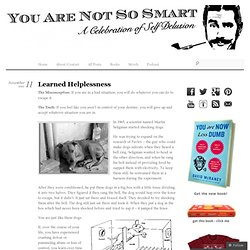 The Truth: If you feel like you aren’t in control of your destiny, you will give up and accept whatever situation you are in. In 1965, a scientist named Martin Seligman started shocking dogs. He was trying to expand on the research of Pavlov – the guy who could make dogs salivate when they heard a bell ring. Seligman wanted to head in the other direction, and when he rang his bell instead of providing food he zapped them with electricity. To keep them still, he restrained them in a harness during the experiment. How Upvote/Downvote Sites like Reddit Breed Irrational Herd Behavior. What I want are different kinds of up votes and down votes that explain my reasoning more clearly as to why I'm giving said vote. 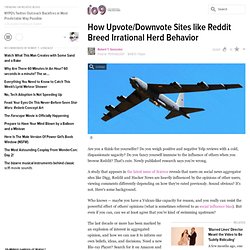 Pour y remédier, Il n'est d'autre solution que de passer d'une logique de la récompense et de l'évaluation à une logique de la responsabilité et du contrat. The Importance of Goodhart's Law. This article introduces Goodhart's law, provides a few examples, tries to explain an origin for the law and lists out a few general mitigations. Goodhart's law states that once a social or economic measure is turned into a target for policy, it will lose any information content that had qualified it to play such a role in the first place. wikipedia The law was named for its developer, Charles Goodhart, a chief economic advisor to the Bank of England.

The much more famous Lucas critique is a relatively specific formulation of the same. The most famous examples of Goodhart's law should be the soviet factories which when given targets on the basis of numbers of nails produced many tiny useless nails and when given targets on basis of weight produced a few giant nails. Numbers and weight both correlated well in a pre-central plan scenario. How Companies Learn Your Secrets. How to Think Like Sherlock Holmes — And Have a Better Life. I remember I was on some antibiotic or combination of antibiotics and something.

It was having weird effects. But one of the effects was that I was emotionless and could look at something and see three steps beyond. This person has been in an abusive relationship. The way he walks indicates he had broken leg and healed wrong. In a fight if you want to run away, he won't be able to chase as effectively. Lasted about 12 hours. I realize I could be completely wrong. Jedi Mind Tricks: 17 Lesser Known Ways to Persuade People.

Want to know how to persuade people online and get what you want? The power of influence is usually all that separates the successful from everyone else. These are some tactics, discovered through psychological research, that you have probably not yet heard about, but have the potential to increase your persuasive abilities. I’m not going to cover reciprocity, scarcity or social proof and all those widely known persuasion principles. Terminology - What is the name of the effect whereby socialising in a group reinforces group beliefs? - Cognitive Sciences Beta - Stack Exchange.

All the points Jeromy made in his first answer can be integrated when you view this from the perspective of Self Categorization Theory (Turner et al., 1987) or newer develoments in social psychology which link Social Identity Theory and Self Categorization Theory (Haslam et al., 2009). To be sure, what I am about to say refers to the situation that an individual does already identify with a certain group. 10 Psychological Experiments That Went Horribly Wrong.

Psychology as we know it is a relatively young science, but since its inception it has helped us to gain a greater understanding of ourselves and our interactions with the world. Many psychological experiments have been valid and ethical, allowing researchers to make new treatments and therapies available, and giving other insights into our motivations and actions. Sadly, others have ended up backfiring horribly — ruining lives and shaming the profession. Here are ten psychological experiments that spiraled out of control. 10. L’impact de nos mouvements de tête sur nos jugements. On s’imagine souvent que lorsque l’on décide quelque chose, on le fait en connaissance de cause et de manière rationnelle.

En réalité les chercheurs en psychologie expérimentale ont montré de nombreuses fois que nos décisions sont souvent très influencées par des éléments que l’on ne soupçonne pas. How Online Companies Get You to Share More and Spend More. Zynga, Facebook, Apple, and many other online companies and services are refining techniques developed by game developers to keep you in their game. Photo: Christopher Griffith; brain created by Megan Caponetto/Apostrophe You’re not stupid, but you can be fooled. For millennia, the best salespeople have known how to exploit the vulnerabilities of the human mind. In the burgeoning field of behavioral economics, we’ve begun to give precise names to the mental weaknesses that make us all susceptible to a well-crafted pitch.

Drawing on the insights of psychology, behavioral economists have explained why we buy more stuff at $0.99 than at $1.00 (the “left-digit effect”), why we commit to gym memberships we’ll never use (“optimism bias”), and why we don’t return things we buy as often as we should (“post-purchase rationalization”). Terminology - What is the term for human beings' tendency to obey without thinking? - Cognitive Sciences Beta - Stack Exchange. I'm wanting to read more about a certain human behavior, but I am not sure what the proper term for it is, so some of the things I am finding aren't what I am looking for.

How to Design Behavior. Empathy doesn't extend across the political aisle. When we try to put ourselves in someone else's shoes, we usually go all the way, assuming that they feel the same way we do. But a new study published in Psychological Science, a journal of the Association for Psychological Science, finds that we have limits: we don't extend this projection to people who have different political views, even under extreme circumstances. The researchers chose to examine political differences because of the big divide perceived between people on opposing sides, as shown by earlier research.

6 Weird Things That Influence Bad Behavior More Than Laws. 5 Shocking Ways You Overestimate Yourself. 4 Cliché Movie Moments Explained by Psychology. The 5 Weirdest Things That Influence How Your Food Tastes. 5 Ways 'Common Sense' Lies To You Everyday. 5 Things You Do Every Day That Are Actually Addictions. Fundamental attribution error. 5 Logical Fallacies That Make You Wrong More Than You Think. The 6 Weirdest Things That Are Ruining Your Memory. 5 Creepy Forms of Mind Control You're Exposed to Daily. 5 Cheap Tricks TV Shows Use To Keep You Watching. 6 Shocking Ways TV Rewires Your Brain. 6 Brainwashing Techniques They're Using On You Right Now. 6 Things You Won't Believe Can Brainwash You On Election Day. 5 Insane Ways Words Can Control Your Mind.

5 Bizarre Brain Hacks That Make You Better at Sports. 6 Counterintuitive Tricks to Beating Popular Game Shows. 4 Reasons Humans Will Never Understand Each Other. Herd behavior. Cognitive Dissonance: Why do people need to have a belief in 'something' Why do facts not matter to some people. Public Opinion: Why do people appear to be so systematically misinformed about basic facts. How stupid people make fools of us all. Stumbling - David Brooks: The social animal. Eight Ways to Spot Emotional Manipulation. Yes! 50 Scientifically Proven Ways to Be Persuasive « alex.moskalyuk.