There are many inconsiderate motorists on the road in Singapore's current society. Motorists were seen driving or riding imprudently or in a dangerous manner without thinking about public safety.

There are recent instances where the driver drove on the incoming lane to prevent a chase from the Traffic Police. Motorists were seen at the road junction failed to look at the incoming traffic, resulting in an accident. Today, due to a complacent mindset, most experienced drivers or riders weaving in and out of traffic and failed to signal when changing lane results in an accident. Motorists who have a negative attitude for not giving way to other vehicles may result in a road rage.

The risky behaviours associated with road traffic crashes evolve as societies change. Road safety laws need to be updated and adapted to address emerging risks such as mobile phone use while driving and drink-driving. Primary enforcement (when drivers can be stopped and sanctioned for violating drinking and driving, seat-belt or other laws independently of committing another offence) can make law enforcement more effective.

Main. 31-year-old man arrested after driving against traffic in high-speed car chase; passenger at large, Singapore News. SINGAPORE - An early morning car chase from the Central Expressway (CTE) to Canberra Street led to the arrest of a 31-year-old driver on Saturday (Sept 12). His male passenger is still at large after fleeing the car on foot when it mounted a kerb and crashed into a tree.

The police said that at about 1.10am, traffic police officers were patrolling along the CTE towards Seletar Expressway, near Ang Mo Kio Avenue 1, when they came across a driver who was driving at a relatively slow speed on the extreme right lane. An officer signalled to the driver to stop the car so that they could conduct a check, but he refused to stop and sped off. The officers gave chase.

In a video uploaded on Facebook page SG Road Vigilante, a white hatchback is seen driving against traffic at high speed. On the other side of the road, at least three police vehicles, including two motorcycles and a car, are seen chasing it. It subsequently mounted a kerb in Canberra Street and collided into a tree, said the police. Speed-tracking devices for heavy vehicles on trial until August. SINGAPORE: Three types of speed-tracking devices for heavy vehicles are currently on trial until August, the Traffic Police (TP) announced on Tuesday (May 22) at the sixth edition of the Singapore Road Safety Month. 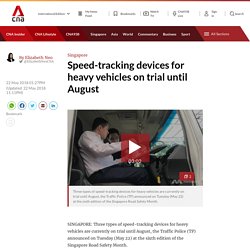 The event, which was focused on educating heavy vehicle drivers and motorcyclists, was kicked off by Senior Parliamentary Secretary for Home Affairs and Health Amrin Amin at Republic Polytechnic. Speed limiters are currently mandated for certain heavy vehicles to curb speeding, but can be easily tampered with, TP said. Comment - Speed tracking device to be installed in heavy vehicles. Harsher punishments for reckless motorists on cards. This article is more than 12 months old. Comment - Harsher punishments for reckless motorists on cards. A larger stick to tackle dangerous driving behaviour. Comment - A larger stick to tackle dangerous driving behaviour. Safe driving course revises rules to help drivers cut 4 demerit points. SINGAPORE: Motorists who have clocked up eight demerit points, and want to have four of those points expunged from their record will now be able to do so after the Traffic Police relaxed the criteria for joining their voluntary Safe Driving Course. 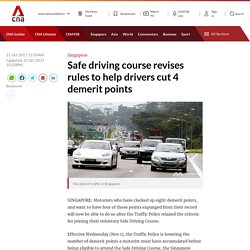 Effective Wednesday (Nov 1), the Traffic Police is lowering the number of demerit points a motorist must have accumulated before being eligible to attend the Safe Driving Course, the Singapore Police Force (SPF) announced on Tuesday. This will allow more motorists to benefit from the course, which aims to encourage motorists to come forward to correct their driving behaviour on their own accord. Motorists who complete the course will have four demerit points deducted from their driving records. From Wednesday, motorists with eight demerit points will be able to attempt the SDC, compared with the 12 points required before the revision of the rules.

Perhaps you’re a fan of the Fast & Furious film franchise and want to try out those cool car stunts for yourself.

Or maybe you think you have the hots to be Singapore’s Best Car Drifter just because you own a sweet car. Or maybe you’re just in a rush and are cutting in and out of the lanes so you can get home faster. All these actions could get you charged for dangerous driving in Singapore. Do you know what the penalties are for drivers convicted of this offence? What is the Offence of Dangerous Driving? Driving Offences and their Punishments. A key piece of regulation, which proscribes dangerous driving behavior in Singapore, is the Road Traffic Act. 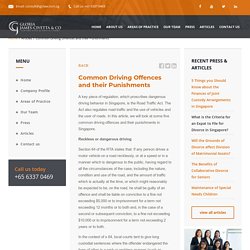 The Act also regulates road traffic and the use of vehicles and the user of roads. In this article, we will look at some five common driving offences and their punishments in Singapore. Road Safety. Defensive Driving Course by SSDC (1-day Theory and Practical) - AA Singapore. The roads today are busier than they have ever been, and they're getting busier all the time. 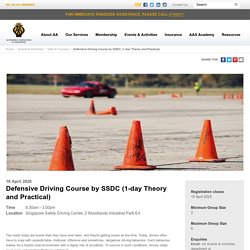 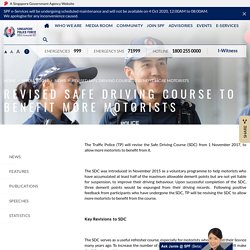 The SDC was introduced in November 2015 as a voluntary programme to help motorists who have accumulated at least half of the maximum allowable demerit points but are not yet liable for suspension, to improve their driving behaviour. Upon successful completion of the SDC, three demerit points would be expunged from their driving records. Anti-drink Drive Campaign 2019 – “Drink and Drive is a Deadly Mix” The Traffic Police (TP) and the Singapore Road Safety Council (SRSC) launched the Anti-Drink Drive Campaign 2019 on Wednesday, 27 November 2019 at Fountain Square, Clarke Quay. 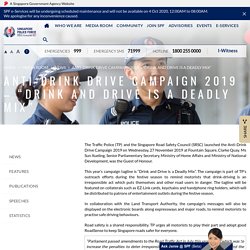 Ms Sun Xueling, Senior Parliamentary Secretary, Ministry of Home Affairs and Ministry of National Development, was the Guest of Honour. This year’s campaign tagline is “Drink and Drive is a Deadly Mix”. The campaign is part of TP’s outreach efforts during the festive season to remind motorists that drink-driving is an irresponsible act which puts themselves and other road users in danger. The tagline will be featured on collaterals such as EZ-Link cards, keychains and handphone ring holders, which will be distributed to patrons of entertainment outlets during the festive season. In collaboration with the Land Transport Authority, the campaign’s messages will also be displayed on the electronic boards along expressways and major roads, to remind motorists to practise safe driving behaviours.