Negligence comes with a heavy price

Road safety is something that should not be compromised. Nevertheless, road traffic injuries are inevitable in Singapore. Traffic rules and guidelines set by the Traffic Police serve as a deterrent to ensure public safety.

Non-compliance to these rules will lead to undesirable outcomes; summons, demerit points, revocation of license, and even incarceration are the most prominent for most. Not to mention, these outcomes apply to motorists, pedestrians, and cyclists. Skinner’s Operant Conditioning: Rewards & Punishments. How Rewards Can Make You a Safer Driver. The psychology of driving When it comes to driving, it may not feel like there are a lot of rewards. 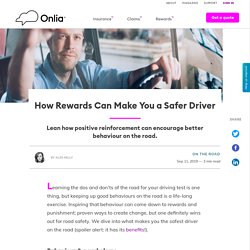 There are a lot of rules and regulations, as well as the potential for tickets from the police. Traditionally, safe driving campaigns have been all about creating fear through shock – think of all the advertisements you’ve seen that feature a gory car crash. The research shows that this can have the opposite effect: stressing out the audience can cause people to ignore or downplay the threat, with little to no change in behaviour. Effective punishment experiences : the need for a more comprehensive approach to conceptualising behavioural punishers and reinforcers in a road safety context. By Judy J. 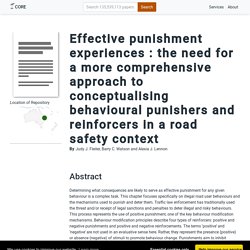 Fleiter, Barry C. Watson and Alexia J. Lennon Abstract Determining what consequences are likely to serve as effective punishment for any given behaviour is a complex task. Topics: 160201 Causes and Prevention of Crime, 170100 PSYCHOLOGY Publisher: Nova Science Publishers Year: 2013 OAI identifier: oai:eprints.qut.edu.au:65102 Download PDF:Sorry, we are unable to provide the full text but you may find it at the following location(s): (external link) (external link) (external link) Lorry driver who was kept in jail for 2 extra days due to ... The man who was kept behind bars for two extra days because of a State Courts error tried to distract himself to avoid thinking about the extra hours he was spending in jail.

For those two nights, he tossed and turned in the jail cell he shared with three others, Mr Teo Seng Tiong said yesterday. The fish farmer was kept awake on some nights during his seven-week imprisonment term by the incessant whirr of the ventilator fan and the noise his cellmates made. Harsher penalties for driving offences including longer jail terms and heavier fines, Singapore News. SINGAPORE - Irresponsible and reckless motorists may face longer jail terms and have their vehicles seized under proposed changes to the Road Traffic Act (RTA). Announcing this on Thursday (Feb 21), Ms Sun Xueling, Senior Parliamentary Secretary for Home Affairs (MHA) and National Development, said: “We want to increase the penalties for motorists who drive irresponsibly and cause serious accidents. “This will deter them and ensure that they receive sentences that are commensurate with the harm they caused.” 64-year-old man charged over Lucky Plaza crash that killed two foreign domestic workers.

More cyclists fined over the years for offences, Transport ... The number of fines handed out to misbehaving cyclists has been increasing steadily, the latest data from the Traffic Police shows. Last year, 1,455 summonses were issued for offences such as riding on the footpath and rash riding. That beats the 1,290 fines issued in 2012 and 1,238 in 2011. Fines can range from $20 for riding on the pavement to as much as $5,000 if the cyclist is convicted of rash riding on a public way, said a police spokesman. "Road safety is a shared responsibility. Singapore's Driver Improvement Points System - a better understanding. In March 1983, the Traffic Police replaced the PDS (Points Demerit System) with the DIPS (Driver Improvement Points System). 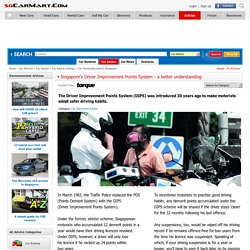 Under the former, stricter scheme, Singaporean motorists who accumulated 12 demerit points in a year would have their driving licences revoked. Under DIPS, however, a driver will only lose his licence if he racked up 24 points within two years. Besides handphones, motorists will be penalised if they are caught using any type of mobile communication devices (including tablets) when driving, after amendments to the Road Traffic Act kicks in from 1st Febuary 2015 New drivers who had just passed their driving test, on the other hand, still had to abide by 'PDS rules' - their licences would be revoked if they amassed more than 12 demerit points within 12 months.

But the leniency of DIPS compared to PDS soon attracted criticism. Any suspensions, too, would be wiped off his driving record if he remains offence-free for two years from the time his licence was suspended. Forum: Various initiatives in place to encourage safe driving, Forum News.

The inaugural RoadSense Carnival was graced by Mr Amrin Amin, Senior Parliamentary Secretary for Ministry of Home Affairs & Ministry of Health. The event’s theme was ‘Take the Road to Responsibility’, and this event was organised to educate road users in Singapore about the importance of graciousness to create a more pleasant road user experience for all Singaporeans. More than 3,600 people attended the event to learn about road safety through a line-up of fun and engaging games and activities. Road Safety Month launched as Singapore reopens, Singapore ... The eighth Singapore Road Safety Month was launched on Tuesday, with traffic expected to increase as Singapore entered the first phase of its post-circuit breaker reopening.

Posters and banners will be put up in trains and at bus shelters and lamp posts during the month-long campaign to remind pedestrians to "ensure that all vehicles have come to a stop before crossing" and motorists to "slow down when approaching traffic lights". First-prize winners of a road safety art competition in March will have their works printed on ez-link cards for distribution.

Although mainly located in the heartland and areas near schools, banners will be displayed - for the first time - in private residential estates in Bukit Timah, said the police and the Singapore Road Safety Council. The campaign is jointly organised by the two, together with the Land Transport Authority, Ministry of Education, People's Association and Automobile Association of Singapore. Strengthening Deterrence Against Irresponsible Driving. 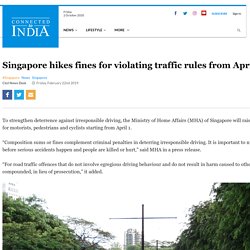