PSY108: Promoting Road Safety: Application of Reinforcements and Punishments by the Traffic Police

Behaviours – Courtesy and Sharing the Road Lack of courtesy and aggressiveness have no place on the road. 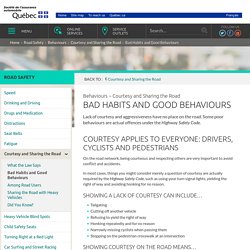 Some poor behaviours are actual offences under the Highway Safety Code. Courtesy applies to everyone: drivers, cyclists and pedestrians On the road network, being courteous and respecting others are very important to avoid conflict and accidents. In most cases, things you might consider merely a question of courtesy are actually required by the Highway Safety Code, such as using your turn signal lights, yielding the right of way and avoiding honking for no reason. Showing a lack of courtesy can include… Tailgating Cutting off another vehicle Refusing to yield the right of way Honking repeatedly and for no reason Narrowly missing cyclists when passing them Stopping on the pedestrian crosswalk at an intersection Showing courtesy on the road means… It's not always someone else's fault When bad behaviours occur on the road, our first reflex is often to blame the other road user. Intersections. (Positive Reinforcement) Traffic Police "Slipping" Incentives, The Straits Times.

(Positive Reinforcement) Certificate of Merit, Traffic Police, budgetdirect.com.sg. Getting a driver’s licence ensures that you are qualified to drive.

But along with that comes the responsibility of making sure you drive safely, not just for your sake but also for the sake of other road users. To ensure that drivers are aware of this and keep safety uppermost on their minds while driving, the Traffic Police has instituted a system of rewards and punishments. In March 1983, the Traffic Police introduced the Driver Improvement Points System (DIPS). How does the Driver Improvement System work? Under Singapore’s DIPS, chalking up 24 demerit points or more within 24 consecutive months will result in a suspension of your driving licence for three months. If you have been suspended before, your licence will be suspended again when you accumulate 12 points within 12 months of your last offence. For most drivers, the fear of racking up demerit points for traffic violations is a sufficient deterrent against reckless driving. (Positive and Negative Punishments) Harsher penalties for irresponsible motorists, The Straits Times. 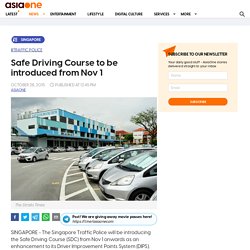 According to a statement by the police, the SDC is designed to educate motorists on safe driving techniques, correct dangerous driving behaviour and encourage good road habits. Eligible motorists who have accumulated half or more of their maximum allowable demerit points will receive a letter of notification from the Traffic Police from Nov 4 inviting them to attend the SDC. They can register for the SDC within the period specified in the notification. Motorists who complete the SDC will have three demerit points cancelled from their driving records. They may receive the cancellation of three demerit points twice during their lifetime. Eligible motorists who choose not to attend the SDC will continue to have their demerit points held against their driving record for the stipulated period, according to the police.

Critique of Current Practices. 'Honk more, wait more': India, theguardian.com. There is a truth universally acknowledged by drivers in India: honk your horn loud enough and the traffic lights will surely change to green. 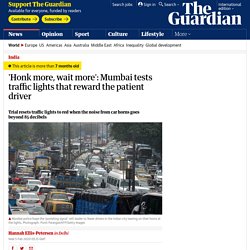 But, fed up of impatient drivers inflicting a deafening roar every time they are forced to stop, police in Mumbai have come up with a new system to punish those who cannot wait at traffic lights in silence. The new system, said the police, was quite simple: “Honk more, wait more.” Known as “the punishing signal”, Mumbai police installed a rigged traffic light system to tackle the problem of “reckless honkers”, which resets the red traffic signal every time the sound of car horns goes above 85 decibels. For particularly honk-happy drivers, it could mean a very long wait at the lights. In a video, which has since gone viral, Mumbai police explained why they had been driven to tackle Mumbai’s cacophony of car horns. “Welcome to the honking capital of the world,” said Mumbai police. He added:“All recognise it, but do little to curb it. Discount Code, Pune Police by thebridgechronicle.com.