PSY108: How traffic police use the concept of reinforcement and punishment to promote road safety

Traffic accidents occur every day in Singapore and everywhere around the world. Other than accidents, road users committed traffic offences daily.

The traffic police department has a tough time to maintain road safety and have been leveraging on technology to deter road users from committing traffic offences. 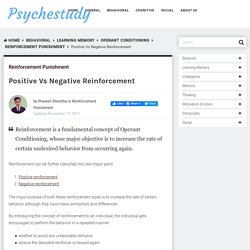 Punishment can be further classified into two major parts These two different types of punishment have got both similarities and differences, as the major purpose of both these punishment types is to decrease the rate of certain undesired behavior. By introducing the concept of punishment to an individual, the individual gets the idea that what he/she is doing, is wrong. Positive and negative punishment, generally speaking, is the concept of adding certain unfavorable consequence or depriving the individual of certain favored item or advantage, in order to decrease the behavior. Positive and negative punishment. Difference Between Positive and Negative Punishment.

Introduction to Psychology. Learning Objectives Distinguish between reinforcement schedules Remember, the best way to teach a person or animal a behavior is to use positive reinforcement. 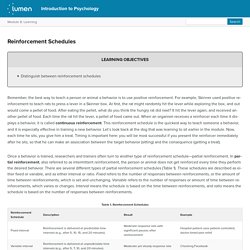 For example, Skinner used positive reinforcement to teach rats to press a lever in a Skinner box. At first, the rat might randomly hit the lever while exploring the box, and out would come a pellet of food. After eating the pellet, what do you think the hungry rat did next? Once a behavior is trained, researchers and trainers often turn to another type of reinforcement schedule—partial reinforcement. Now let’s combine these four terms. With a variable interval reinforcement schedule, the person or animal gets the reinforcement based on varying amounts of time, which are unpredictable. Schedules of reinforcement. (Positive Reinforcement) Certificate of Merit. What is it? And how can you get one?

But along with that comes the responsibility of making sure you drive safely, not just for your sake but also for the sake of other road users. To ensure that drivers are aware of this and keep safety uppermost on their minds while driving, the Traffic Police has instituted a system of rewards and punishments. In March 1983, the Traffic Police introduced the Driver Improvement Points System (DIPS). How does the Driver Improvement System work? Under Singapore’s DIPS, chalking up 24 demerit points or more within 24 consecutive months will result in a suspension of your driving licence for three months. If you have been suspended before, your licence will be suspended again when you accumulate 12 points within 12 months of your last offence. For most drivers, the fear of racking up demerit points for traffic violations is a sufficient deterrent against reckless driving. (Positive Reinforcement) Oct2019 Singapore traffic police officers stop and reward riders whom suited up when riding. 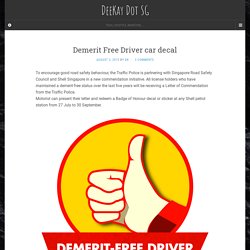 All license holders who have maintained a demerit-free status over the last five years will be receiving a Letter of Commendation from the Traffic Police. Motorist can present their letter and redeem a Badge of Honour decal or sticker at any Shell petrol station from 27 July to 30 September. More than 1.2 million license-holders will qualify for this Demerit Free Driver decal. If you qualify, you should redeem your decal soon. (Positive Reinforcement) Motorists get pulled over - for doing good. When Mr Lim Kan Seng's Toyota Previa was pulled over by the Traffic Police along New Upper Changi Road yesterday morning, he panicked a little. Mr Lim, 50, a hawker, thought he might be in for a summons, but what he received instead were a zebra plush toy and $40 worth of petrol vouchers.

"I thought I had done something wrong... but the police said they saw me giving way to another driver, and wanted to commend me," he said. "I had just turned left into the main road when another car was trying to cut into my lane from the right, so I let him pass. " Mr Lim was among seven motorists who were pulled over on the roads yesterday for displaying good driving habits, as part of a nine-hour island-wide "Spot the Conscientious Motorists" operation conducted by the police. Since the programme started in October 2013, 391 motorists have been identified and rewarded. Motorists get a commendation certificate, in addition to the road safety mascot toy and vouchers. (Negative Reinforcement) Traffic Police's new portable speed laser cameras: Where can you find them , Transport News. (Negative Reinforcement) Traffic police to deploy new speed laser cameras. (Negative Punishment) Traffic Offences in Singapore: Demerit Points & Composition Fines (2020 Update)

(Negative Punishment) Traffic Police's stealth bikers share common offences they spot on the road. SINGAPORE - Using mobile phones while driving, heavy vehicles speeding and failing to keep left, reckless riding - these are some of the common offences that the Traffic Police's new road enforcers have encountered while out on patrol since June. In a video posted on the Facebook page of Use Your RoadSense on Monday (Aug 8), the Traffic Police (TP) revealed footage of how its "stealth bike" team identifies the offences and in one case, chased down an errant motorcyclist for dangerous riding and speeding. The two-minute clip has since racked up over 300,000 views and more than 7,200 shares.

"These 'men in black' look out for common traffic offences, such as driving while using the handphone, and ensure that motorists are ever-alert on the roads - a timely reminder not to #PokemonGo and drive," the post said. Also called covert officers, the TP's stealth bikers have been on the roads since June, in an attempt to clamp down on road offenders. Driving while using mobile communication devices. (Negative Punishment) Charged with a Traffic Offence in Singapore: What to Do. The number of traffic offences committed in Singapore have been constantly high. 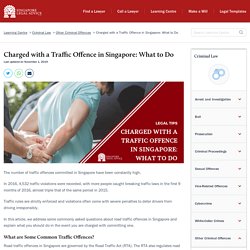 In 2016, 4,532 traffic violations were recorded, with more people caught breaking traffic laws in the first 9 months of 2016, almost triple that of the same period in 2015. (Negative Punishment) Parliament: Licences of 69 drivers revoked for driving with disabilities or diseases that affect safety, Politics News. SINGAPORE - The driving licenses of 69 drivers were revoked over the past four years after they were found to have disabilities or diseases that impeded their driving abilities. Parliamentary Secretary for Home Affairs Amrin Amin told the House on Tuesday (Jan 10) that drivers' licences are revoked if they fail medical examinations after they were involved in accidents or other investigations.

Of the 69 cases, 12 were drivers involved in accidents due to their conditions, he said. He was responding to questions from Mr Murali Pillai (Bukit Batok) on whether the Traffic Police intends to require drivers and medical professionals to report cases where drivers develop diseases or disabilities which could affect their driving safety. Mr Amrin said the Ministry of Home Affairs will study the practices of other countries and see what the best options for Singapore are. Road Safety Tips. A safe road journey cannot be taken for granted! 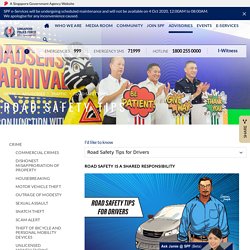 Like Gracious Joseph, remember to always exercise patience and graciousness. Stay alert, drive carefully and follow traffic rules, signs, and signals. Follow these safe-driving tips and habits to enhance your experience on the roads, and make your journeys more safe and pleasant. Never drink and drive. Never get behind the wheel when you’re tired. Maintain your vehicle regularly to minimise the chances of an accident due to mechanical failure. Always check your blind spot – avoid changing lanes at bends. SPF Road Safety Video. The Speed Camera Lottery Adds Positive Reinforcement To Encourage People To Obey The Speed Limit. By Andrew Liszewski Speed cameras typically rely on negative reinforcement to discourage people from driving too fast where they’ve been set up. 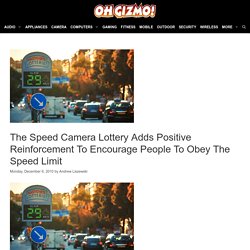 If the radar clocks you driving faster than you should be, your license plate is photographed and a speeding ticket is mailed off to you. The Speed Camera Lottery however, which was Kevin Richardson’s winning entry in Volkswagen’s ‘The Fun Theory‘ contest, adds a bit of positive reinforcement to the mix. From what I can tell Volkswagen’s contest actually ended last year, but Kevin Richardson’s idea was so good that it has already been tested and implemented by the The Swedish National Society for Road Safety in Stockholm.

Best road safety practices from around the world. Countries like India could take its cue from the policies, regulatory framework and institutional capacities developed by European nations, Japan and Oman Globally, countries are moving towards zero tolerance policy on accidents and transforming urban and road design for safety. 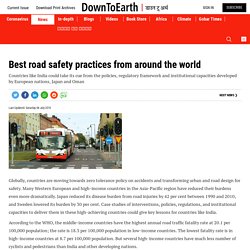 Many Western European and high-income countries in the Asia-Pacific region have reduced their burdens even more dramatically. Japan reduced its disease burden from road injuries by 42 per cent between 1990 and 2010, and Sweden lowered its burden by 30 per cent. Case studies of interventions, policies, regulations, and institutional capacities to deliver them in these high-achieving countries could give key lessons for countries like India. According to the WHO, the middle-income countries have the highest annual road traffic fatality rate at 20.1 per 100,000 population; the rate is 18.3 per 100,000 population in low-income countries.

Germany: A computerised point system for traffic violations is in place.