Road traffic accidents is one of the leading causes of death globally. Countless lives are lost to negligence on the roads while some victims and their families have to struggle and live with the effects of the accident for the rest of their lives.

The inaugural RoadSense Carnival was graced by Mr Amrin Amin, Senior Parliamentary Secretary for Ministry of Home Affairs & Ministry of Health. Three new categories introduced for this year's road safety awards, Transport News. Singapore Road Safety Council. Everything You Need to Know About No Claim Discount (NCD) in Singapore. If you own a vehicle in Singapore, you’ll definitely have motor insurance coverage, and you’ve probably heard of the No Claim Discount (NCD). 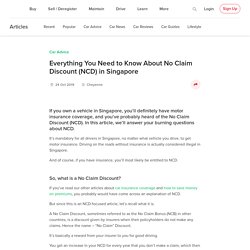 In this article, we’ll answer your burning questions about NCD. It’s mandatory for all drivers in Singapore, no matter what vehicle you drive, to get motor insurance. Driving on the roads without insurance is actually considered illegal in Singapore. And of course, if you have insurance, you’ll most likely be entitled to NCD. So, what is a No Claim Discount? If you’ve read our other articles about car insurance coverage and how to save money on premiums, you probably would have come across an explanation of NCD. But since this is an NCD-focused article, let’s recall what it is. A No Claim Discount, sometimes referred to as the No Claim Bonus (NCB) in other countries, is a discount given by insurers when their policyholders do not make any claims.

Certificate of Merit. What is it? And how can you get one? Getting a driver’s licence ensures that you are qualified to drive.

But along with that comes the responsibility of making sure you drive safely, not just for your sake but also for the sake of other road users. Road Traffic Act - Singapore Statutes Online. LTA Offences & Fines. Learn more about common vehicle-related offences in Singapore to avoid committing them. 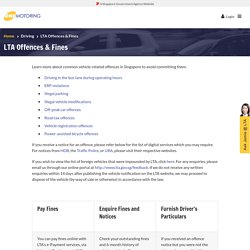 If you receive a notice for an offence, please refer below for the list of digital services which you may require. For notices from HDB, the Traffic Police, or URA, please visit their respective websites. If you wish to view the list of foreign vehicles that were impounded by LTA, click here. For any enquiries, please email us through our online portal at If we do not receive any written enquiries within 14 days after publishing the vehicle notification on the LTA website, we may proceed to dispose of the vehicle (by way of sale or otherwise) in accordance with the law. Harsher penalties for irresponsible motorists from November; driving bans take effect second half of 2020, Transport News. SINGAPORE - Motorists who drive dangerously can face harsher penalties from November following recent changes to the Road Traffic Act. Penalties under the changes that result in motorists' licences being suspended or revoked will take effect in the second half of next year, said the Ministry of Home Affairs (MHA) on Friday (Oct 25).

Under the changes to the Road Traffic Act passed in Parliament in July, the duration of the sentences will depend on the extent of harm caused by errant motorists. The harm caused is categorised such that death is the most severe, followed by grievous hurt, hurt and endangering life. For instance, repeat offenders who drive dangerously causing death will face a maximum of 15 years' in jail. DUI: Here are the Penalties for Drink-Driving in Singapore. The number of drink-driving cases and imprisonment sentences meted out in Singapore have risen tremendously. 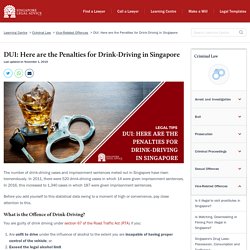 In 2011, there were 520 drink-driving cases in which 14 were given imprisonment sentences. In 2016, this increased to 1,340 cases in which 187 were given imprisonment sentences. Before you add yourself to this statistical data owing to a moment of high or convenience, pay close attention to this. Driver's Improvement Point System (DIPS) Parliament: Higher traffic fines for drivers of luxury cars among MPs' suggestions to improve road safety, Politics News. SINGAPORE - Fines for traffic offences should be pegged to the open market value of the offending motorist's vehicle, which would enhance the deterrent effect against unsafe driving. In doing so, motorists who own luxury cars would then pay more fines for the same offence compared to those who drive cheaper vehicles, suggested Nominated Member of Parliament Walter Theseira in Parliament on Monday (July 8).

This would make fines more meaningful as a deterrent for motorists of higher income levels, he added. Dr Theseira said this would be a more practical way than pegging fines to the income levels of errant motorists, as he cited the example of a Finnish businessman who was fined 54,024 euros for driving at 64 miles per hour in a 50 mile per hour zone. She added that the Ministry of Home Affairs will study the suitability and impact of implementing such a similar system. Most traffic junctions to have red-amber-green arrows instead of discretionary right turns by 2023. SINGAPORE: As part of efforts to increase pedestrian safety, red-amber-green turning arrows will be introduced at the majority of traffic junctions over the next three years. 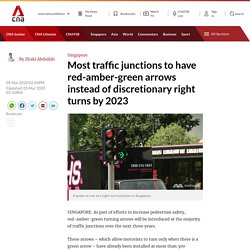 These arrows – which allow motorists to turn only when there is a green arrow – have already been installed at more than 300 junctions, and will be installed at 1,200 junctions by 2023, said Senior Parliamentary Secretary for Transport Baey Yam Keng on Thursday (Mar 5). Mr Baey was responding to Hougang MP Png Eng Huat during the Committee of Supply debate for the Ministry of Transport.

Mr Png noted that there was an accident on Jan 6 involving a student who was hit by a vehicle making a discretionary right turn – where motorists can turn even in the absence of a green arrow – if they determine it is safe to do so. “How is that not dangerous to begin with?” He asked. Anti-Fatigue Systems for buses. An Anti-Fatigue System (AFS) is an onboard system installed on vehicles to detect signs of driver fatigue while driving. 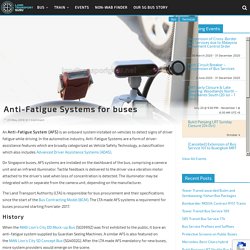 In the automotive industry, Anti-Fatigue Systems are a form of driver-assistance features which are broadly categorized as Vehicle Safety Technology, a classification which also includes Advanced Driver Assistance Systems (ADAS). On Singapore buses, AFS systems are installed on the dashboard of the bus, comprising a camera unit and an infrared illuminator. Tactile feedback is delivered to the driver via a vibration motor attached to the driver’s seat when loss of concentration is detected. The illuminator may be integrated with or separate from the camera unit, depending on the manufacturer. SBS buses go high-tech to look out for road users, Transport News. SBS Transit's bus drivers will soon get an extra set of special eyes to help them look out for vehicles, pedestrians and cyclists on the roads. 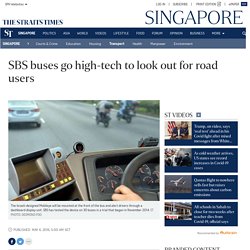 The intelligent camera sensor, called Mobileye, will be mounted at the front of the bus and alert drivers through a dashboard display unit when they are too close to the vehicle in front, and if a pedestrian or cyclist comes into their path. SBS, the country's biggest bus operator, plans to install the Israeli-designed advanced driver assistance system (Adas) on more than 3,000 buses by the end of 2018, The Straits Times has learnt . Last month, the company awarded a $1.3 million contract to local distributor Chuan-Fa Auto to install the system on a first batch of 750 buses by the end of this year. SBS chief executive Gan Juay Kiat said: "Mobileye is a system that aids our bus captains by serving as an extra pair of eyes to alert them to potential risks that may come into their paths.