Using the principle of reinforcement and punishment to promote road safety

Reinforcement and punishment help us understanding learning from a different perspective. Reinforce learning could help us strengthen the desired response, whereas punishment seeks to weaken it. 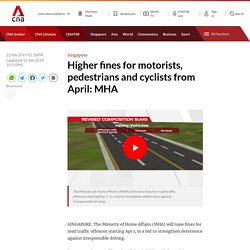 In a press release on Thursday (Feb 21), MHA said that raising composition sums, or fines, would ensure that they remain effective as a deterrent and curb the uptrend in road traffic offences. "It is important to nip unsafe driving in the bud, before serious accidents happen and people are killed or hurt," said MHA. READ: More drink-driving accidents, motorists running red lights: Police "For road traffic offences that do not involve egregious driving behaviour and do not result in harm caused to others, the offence may be compounded, in lieu of prosecution," the ministry added.

Fines for motorist road traffic offences were last reviewed in 2000. For committing an offence with zero demerit points such as an illegal U-turn, drivers of light vehicles could be fined S$100, up from the current S$70. [Positive Punishment] Fines in Singapore - 9 Things You Don't Want To Be Caught Doing - MoneySmart.sg. Singapore is not known as a fine city for nothing. 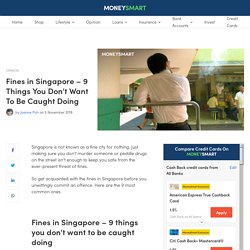 Just making sure you don’t murder someone or peddle drugs on the street isn’t enough to keep you safe from the ever-present threat of fines. So get acquainted with the fines in Singapore before you unwittingly commit an offence. Here are the 9 most common ones. Fines in Singapore – 9 things you don’t want to be caught doing 1.

The infamous chewing gum ban in Singapore is a perplexing one for foreigners, but the reasons behind it are simple: incidents of gum stuck between MRT train doors caused disruptions and cleaning up carelessly disposed chewing gum was costing the city too much money in 1991. Fortunately, following a ban lift in 2004, some pharmacies do carry chewing gum for medical purposes. While you can chew gum in Singapore, take note if you are caught importing chewing gum, you could be fined up to $10,000 or jailed up to one year for first-time offenders. 2. 3. 4. 5. 6. 7. 8. The MRT is a dangerous place.

[Positive Punishment] Notes Explanation. [Negative Punishment] Penalties for Dangerous Driving for Singapore Drivers. Perhaps you’re a fan of the Fast & Furious film franchise and want to try out those cool car stunts for yourself.

Or maybe you think you have the hots to be Singapore’s Best Car Drifter just because you own a sweet car. Or maybe you’re just in a rush and are cutting in and out of the lanes so you can get home faster. All these actions could get you charged for dangerous driving in Singapore. Do you know what the penalties are for drivers convicted of this offence? What is the Offence of Dangerous Driving? If a driver drives at a speed or manner dangerous to the public, he will be guilty of an offence under section 64(1) of the Road Traffic Act (RTA).