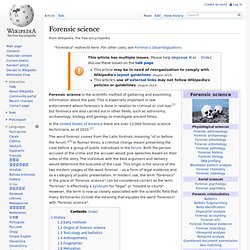 This is especially important in law enforcement where forensics is done in relation to criminal or civil law,[1] but forensics are also carried out in other fields, such as astronomy, archaeology, biology and geology to investigate ancient times. Phrenology. Phrenology (from Greek: φρήν, phrēn, "mind"; and λόγος, logos, "knowledge") is a pseudoscience primarily focused on measurements of the human skull, based on the concept that the brain is the organ of the mind, and that certain brain areas have localized, specific functions or modules.[1] Developed by German physician Franz Joseph Gall in 1796,[2] the discipline was very popular in the 19th century, especially from about 1810 until 1840. 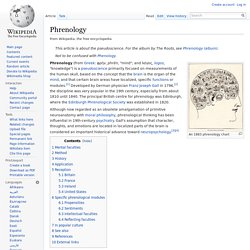 The principal British centre for phrenology was Edinburgh, where the Edinburgh Phrenological Society was established in 1820. Although now regarded as an obsolete amalgamation of primitive neuroanatomy with moral philosophy, phrenological thinking has been influential in 19th-century psychiatry. Fingerprint. A fingerprint in its narrow sense is an impression left by the friction ridges of a human finger.[1] The recovery of fingerprints from a crime scene is an important method of forensic science. 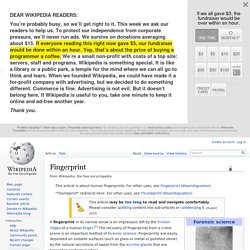 Fingerprints are easily deposited on suitable surfaces (such as glass or metal or polished stone) by the natural secretions of sweat from the eccrine glands that are present in epidermal ridges. The History of Fingerprints. Updated 16 September 2015 Why Fingerprint Identification? 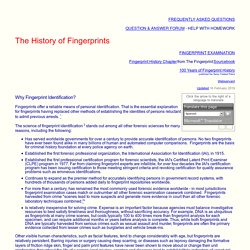 Fingerprints offer a reliable means of personal identification. That is the essential explanation for fingerprints having replaced other methods of establishing the identities of criminals reluctant to admit previous arrests. 1 The science of fingerprint Identification stands out among all other forensic sciences for many reasons, including the following: Has served governments worldwide for over 100 years to provide accurate identification of criminals. Other visible human characteristics such as facial features tend to change with age, but fingerprints are relatively persistent. In earlier civilizations, branding or maiming were used to mark the criminal for what he or she was. Before the mid-1800s, law enforcement officers with extraordinary visual memories, so-called "camera eyes," identified previously arrested offenders by sight alone. 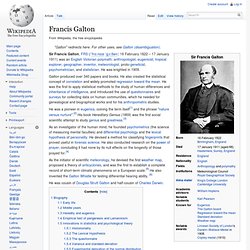 He was knighted in 1909. Galton produced over 340 papers and books. He also created the statistical concept of correlation and widely promoted regression toward the mean. Crimeline * history of forensic sciences * history of criminology * toxicology * fingerprint * dna analysis * autopsy * arsenic * poison. Bernard Spilsbury. Sir Bernard Henry Spilsbury KBE (16 May 1877 – 17 December 1947) was a British pathologist. 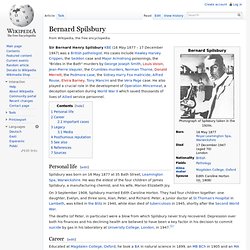 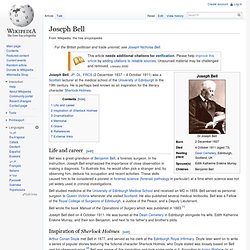 He is perhaps best known as an inspiration for the literary character Sherlock Holmes. Life and career[edit] Bell was a great-grandson of Benjamin Bell, a forensic surgeon. Alphonse Bertillon. Class on the Bertillon system in France in 1911 Alphonse Bertillon (French: [bɛʁtijɔ̃]; April 24, 1853 – February 13, 1914) was a French police officer and biometrics researcher who applied the anthropological technique of anthropometry to law enforcement creating an identification system based on physical measurements. 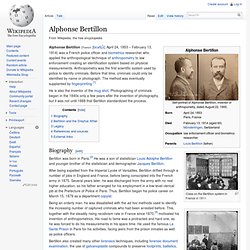 Anthropometry was the first scientific system used by police to identify criminals. Before that time, criminals could only be identified by name or photograph. The method was eventually supplanted by fingerprinting.[1] He is also the inventor of the mug shot. Famous Crimes - The Famous Crimes and Criminals of History. These are the cases books are written about and movies are made -- the heinous crimes, the serial killers, the shocking murder cases, the celebrity defendants and the cold case files, some of which have remained unsolved for decades. 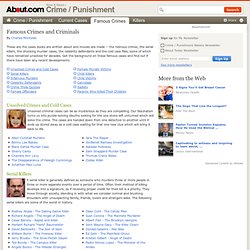 Get the background on these famous cases and find out if there have been any recent developments. Unsolved Crimes and Cold Cases Unsolved criminal cases can be as mysterious as they are compelling. Our fascination turns us into puzzle-solving sleuths looking for the one stone left unturned which will solve the crime. The cases are handed down from one detective to another until it ends up stored away as a cold case waiting for that one new clue which will bring it back to life. H. H. Holmes. Herman Webster Mudgett (May 16, 1861[1] – May 7, 1896[2]), better known under the name of Dr. 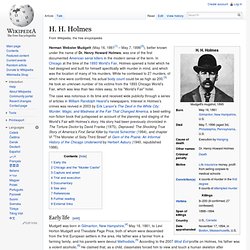 Henry Howard Holmes, was one of the first documented American serial killers in the modern sense of the term. In Chicago at the time of the 1893 World's Fair, Holmes opened a hotel which he had designed and built for himself specifically with murder in mind, and which was the location of many of his murders. While he confessed to 27 murders, of which nine were confirmed, his actual body count could be as high as 200.[3] He took an unknown number of his victims from the 1893 Chicago World's Fair, which was less than two miles away, to his "World's Fair" hotel.

Early life[edit] Mary Ann Cotton. Mary Ann Cotton (born Mary Ann Robson; 31 October 1832 – 24 March 1873) was an English woman convicted of murdering her children. She was believed to have murdered up to 21 people, mainly by arsenic poisoning. Early life[edit] Mary Ann Robson was born on 31 October 1832 at Low Moorsley (now part of Houghton-le-Spring in the City of Sunderland) and baptised at St Mary's, West Rainton on 11 November.

When Mary Ann was eight, her parents moved the family to the County Durham village of Murton, where she went to a new school and found it difficult to make friends. Soon after the move her father fell 150 feet (46 m) to his death down a mine shaft at Murton Colliery. Béla Kiss. Béla Kiss (1877 – ?) (last name pronounced "Kish") was a Hungarian serial killer. He is thought to have murdered at least 24 young women and attempted to pickle them in giant metal drums that he kept on his property. Life[edit] Béla Kiss was a tinsmith who had lived in Czinkota (then a town near Budapest, now a neighborhood within the city itself) since 1900. He was an amateur astrologer and allegedly fond of other occult practices.

Townsfolk also noticed that Kiss had collected a number of metal drums. Search[edit] In July 1916, Budapest police received a call from a Czinkota landlord who had found seven large metal drums. Nagy informed the military that they should arrest Béla Kiss immediately, if he was still alive - there was also a possibility that he was a prisoner of war. Jakubec assured police that she knew absolutely nothing about the murders. Belle Gunness. Belle Sorenson Gunness (born as Brynhild Paulsdatter Størseth; November 11, 1859 – April 28, 1908) was a Norwegian-American serial killer. Standing six feet tall (183 cm) and weighing over 200 pounds (91 kg), she was a physically strong woman.[2] She killed most of her suitors and boyfriends, and her two daughters, Myrtle and Lucy. She may also have killed both of her husbands and all of her children, on different occasions. Her apparent motives involved collecting life insurance, cash and other valuables, and eliminating witnesses.

Reports estimate that she killed between 25 and 40 people over several decades. Biography[edit] Early years[edit] George Joseph Smith. George Joseph Smith (11 January 1872 – 13 August 1915) was an English serial killer and bigamist. In 1915 he was convicted and subsequently hanged for the slayings of three women, the case becoming known as the "Brides in the Bath Murders". As well as being widely reported in the media, the case was significant in the history of forensic pathology and detection. It was also one of the first cases in which similarities between connected crimes were used to prove deliberation, a technique used in subsequent prosecutions. Early life and marriages[edit] Metropolitan Police Service - History - Crime Museum. Black Museum. Criminology. Background information on grave robbing in Scotland.