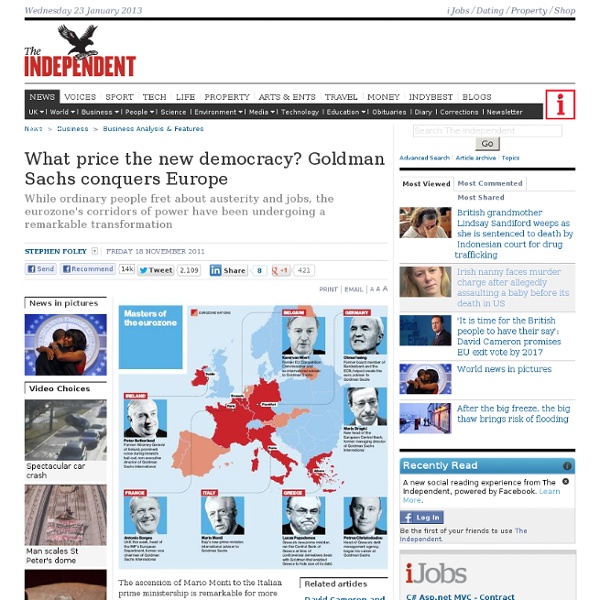 This is the most remarkable thing of all: a giant leap forward for, or perhaps even the successful culmination of, the Goldman Sachs Project. It is not just Mr Monti. The European Central Bank, another crucial player in the sovereign debt drama, is under ex-Goldman management, and the investment bank's alumni hold sway in the corridors of power in almost every European nation, as they have done in the US throughout the financial crisis. Until Wednesday, the International Monetary Fund's European division was also run by a Goldman man, Antonio Borges, who just resigned for personal reasons. Even before the upheaval in Italy, there was no sign of Goldman Sachs living down its nickname as "the Vampire Squid", and now that its tentacles reach to the top of the eurozone, sceptical voices are raising questions over its influence. This is The Goldman Sachs Project. With these connections, it was natural for Goldman to invite him to join its board of international advisers.

UK trader becomes an Internet sensation Alessio Rastani said he went to "bed every night dreaming of a recession"His remarks made him an Internet sensationRastani is an amateur trader who says he uses his own money and has clientsHe believes people want to stop him talking about a coming financial storm London (CNN) -- Alessio Rastani went on a UK news channel on Monday to discuss where stock markets were heading. By Tuesday he was an Internet sensation. Was it that he said, as someone who bets against markets rising, that he "goes to bed every night dreaming of a recession?"

47 Signs That China Is Absolutely Destroying America Have you ever watched a football game or a basketball game where one team dominates the other team so badly that calling it a "blowout" would be a huge understatement? Well, that is what China is doing to the United States. China is absolutely destroying America on the global economic stage. Once upon a time, the Chinese economy was a joke and the U.S. economy was the most powerful the world had ever seen. But over the past couple of decades the U.S. economy has decayed and declined while the Chinese economy has skyrocketed.

BBC: Mario Draghi appointed as head of European Central Bank 24 June 2011Last updated at 12:04 Italy's Mario Draghi will take over at the ECB from Jean-Claude Trichet who will leave in October EU leaders have voted for Italy's Mario Draghi to follow Jean-Claude Trichet as the head of the European Central Bank. The European Parliament and the ECB board had already given their approval to Mr Draghi's appointment. Confirmation came after fellow Italian Lorenzo Bini Smaghi reportedly agreed to step down as an executive board member of the ECB.

Sorry, but this trader's banking confession was no prank Trader Alessio Rastani shocked BBC viewers when said he ‘dreams of another recession'. Photograph: None/pixel8000 This week, an insignificant market trader and self-proclaimed financial self-help guru, Alessio Rastani, rocketed to stardom after speaking frankly on the BBC about the collapsing market and his plans to make money from it. Why do we take economists so seriously? It's the economists, stupid! While we were not waving but drowning in soggy flags, economic stuff was happening. Big stuff, though it could not break through the gooey queen-fest. In the news blackout that was the jubilee, other countries were reporting the meltdown of the Spanish banks, and thus, eventually, the euro.

Mario Draghi - current president ECB Mario Draghi (Italian pronunciation: [ˈmaːrjo ˈdraːɡi]; born 3 September 1947) is an Italian banker and economist who succeeded Jean-Claude Trichet as the President of the European Central Bank on 1 November 2011. He was previously the governor of the Bank of Italy from January 2006 until October 2011. In 2013 Forbes nominated Draghi 9th most powerful person in the world. Background[edit] He was born in Rome, where he studied at the Massimiliano Massimo Institute[2] and graduated from La Sapienza University under the supervision of Federico Caffè. Then he earned a PhD in economics from the Massachusetts Institute of Technology in 1976 with his thesis titled Essays on economic theory and applications, under the supervision of Franco Modigliani and Robert Solow.[3] He was full professor at the Cesare Alfieri Faculty of Political Science of the University of Florence from 1981 until 1994[4] and fellow of the Institute of Politics at the John F.

Does Goldman Sachs really rule the world? - Views Updated: Thu, Sep 29 2011. 01 15 PM IST In a BBC interview that has gone viral thanks to You Tube, a financial trader named Allesio Rastani made a stunning claim: “The governments don’t rule the world. Goldman Sachs rules the world. Goldman Sachs does not care about this (European) rescue package, neither do the big funds.” Rastani left his interviewer shell shocked with other provocations. 97% Owned: New Documentary Introductory videos The basics you need to know: Why is there so much debt? Why are house prices so high?

[video] taxevaders.net playfully invading Super Mario #goldman Draghi's austerity mandate Sign up | Login Welcome Map Feed Details Download Help About Blog name The price of getting the 'predators' off our backs Sometimes it's hard to tell the predators from the producers. Alessio Rastani seemed like a major predator when he appeared on the BBC, proclaiming: "For most traders, we don't really care that much how they're going to fix the economy, how they're going to fix the whole situation. Our job is to make money from it." Of course that's true. If that wasn't true, it would be traders, not politicians, who were deep in negotiations and struggling to hold the eurozone together. Instead, traders just wait for announcements and promises from frazzled heads of state, then, if pressed, offer gnomic statements about whether those announcements and promises are likely to be pleasing to the markets.

In defense of prudes - Sex News, Sex Talk At a neighborhood bar this weekend, a straight female friend of mine, having unfavorably sized up the romantic prospects in the room, implied that she wanted to kiss me. Ah yes, the old standby of my generation: The drunken girl-on-girl makeout. The suggestion wasn’t shocking but it wasn’t particularly appealing either, so I politely declined — and she exclaimed: “Oh my god, you’re such a prude!” It isn’t the first time I’ve been told that. A couple months earlier, I declined my roommate’s offer to show me her newly waxed vagina and she declared, “You’re the most prudish sex writer I’ve ever met!”

European Central Bank -mandate- The primary objective of the European Central Bank, as mandated in Article 2 of the Statute of the ECB,[2] is to maintain price stability within the Eurozone. The basic tasks, as defined in Article 3 of the Statute,[2] are to define and implement the monetary policy for the Eurozone, to conduct foreign exchange operations, to take care of the foreign reserves of the European System of Central Banks and operation of the financial market infrastructure under the TARGET2 payments system and the technical platform (currently being developed) for settlement of securities in Europe (TARGET2 Securities). The ECB has, under Article 16 of its Statute,[2] the exclusive right to authorise the issuance of euro banknotes.

Alessio Rastani Is Not Exactly Saying Anything All That Radical - MarketBeat By Mark Gongloff The Internets are ablaze with amazement over some fella named Alessio Rastani, who left jaws agape on both sides of the Atlantic by going on the teevee and saying scary things. But what he said was really not all that shocking. There was initially a lot of debate about whether Mr.