Forensic genealogy: how police use family trees to solve cold cases. When she answers my call, Paula Armentrout is buzzing with the news that’s just come through. 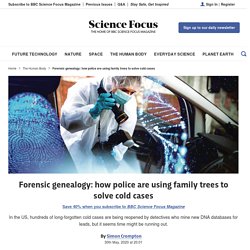 Her company’s DNA analysis and genetic genealogy service has just led to the arrest of a man for two murders that happened four years ago. Forensic genealogy: how police use family trees to solve cold cases. Nypost. THE controversy surrounding Facebook in recent months has raised huge concerns about the security of our data. 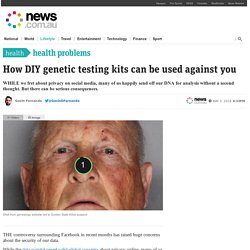 While the data scandal raised valid global concerns about privacy online, many of us are still happy to hand samples of our genetic make-up over to big companies, either unaware or unfazed by what it might be used for. The alleged Golden State Killer brought the implications of DNA testing back into the spotlight. DNA Forensics. Sherlock Holmes is the archetypal scientist – brilliant but slightly scary. More than 75 different actors have taken him on, making him the most portrayed character on film and television ever. 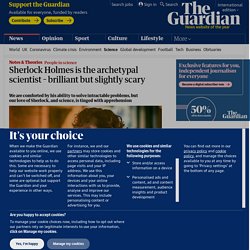 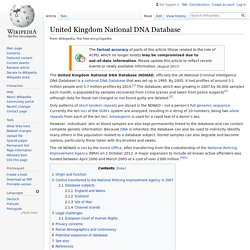 By 2005, it had profiles of around 3.1 million people and 5.7 million profiles by 2015.[1] The database, which was growing in 2007 by 30,000 samples each month, is populated by samples recovered from crime scenes and taken from police suspects[2] although data for those not charged or not found guilty are deleted.[3] However, individuals' skin or blood samples are also kept permanently linked to the database and can contain complete genetic information. Because DNA is inherited, the database can also be used to indirectly identify many others in the population related to a database subject. Stored samples can also degrade and become useless, particularly those taken with dry brushes and swabs. Origin and function[edit] Integrated Ballistics Identification System.

The Integrated Ballistics Identification System, or IBIS, is the brand of the Automated firearms identification system manufactured by Forensic Technology WAI, Inc., of Montreal, Canada. 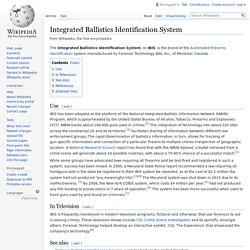 Use[edit] IBIS has been adopted as the platform of the National Integrated Ballistic Information Network (NIBIN) Program, which is spearheaded by the United States Bureau of Alcohol, Tobacco, Firearms and Explosives (ATF). NIBIN tracks about 100,000 guns used in crimes.[1] The integration of technology into about 220 sites across the continental US and its territories [2] facilitates sharing of information between different law enforcement groups. The rapid dissemination of ballistics information, in turn, allows for tracking of gun-specific information and connection of a particular firearm to multiple crimes irrespective of geographic location. While some groups have advocated laws requiring all firearms sold be test-fired and registered in such a system, success has been mixed. In Television[edit] Forensic Laboratories. 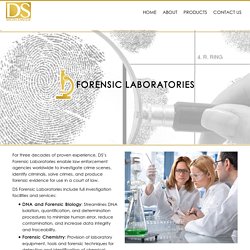 DS Forensic Laboratories include full investigation facilities and services: DNA and Forensic Biology: Streamlines DNA isolation, quantification, and determination procedures to minimize human error, reduce contamination, and increase data integrity and traceability.Forensic Chemistry: Provision of laboratory equipment, tools and forensic techniques for detection and identification of chemical materials and substances such as drugs, explosives, body fluids and poisons based on approved legal and scientific methods.Fingerprints: Development of latent fingerprints based on chemical, physical, and optical techniques. Jeff Sessions and the Odds of Imprisoning Innocents - The Atlantic. The Washington Post reports that Attorney General Jeff Sessions “will end a Justice Department partnership with independent scientists to raise forensic science standards.” 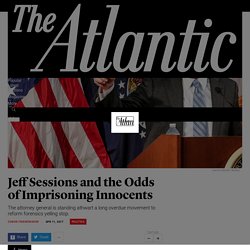 If that doesn’t scan as hugely important subject a bit of background is needed. In 1989, when a wrongly imprisoned American was exonerated for the first time using DNA evidence, a new era began in the criminal justice system. How Science Is Putting a New Face on Crime Solving. This story appears in the July 2016 issue of National Geographic magazine. 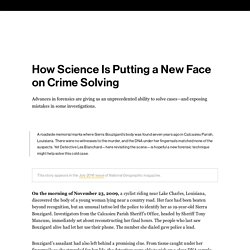 On the morning of November 23, 2009, a cyclist riding near Lake Charles, Louisiana, discovered the body of a young woman lying near a country road. Her face had been beaten beyond recognition, but an unusual tattoo led the police to identify her as 19-year-old Sierra Bouzigard. Investigators from the Calcasieu Parish Sheriff’s Office, headed by Sheriff Tony Mancuso, immediately set about reconstructing her final hours.

Parabon’s DNA Phenotyping Had Crucial Role in North Carolina Double-Murder Arrest, Conviction. A couple were gunned down by an intruder in their North Carolina home in the early hours of Feb. 4, 2012. 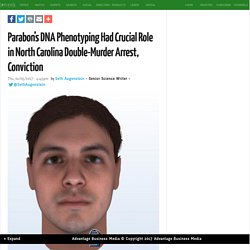 The teenaged daughter had seen the hooded gunman, when he had briefly held a knife to her throat, but she could apparently not describe him to cops. The attacker left several drops of blood on a handrail as he fled, apparently self-inflicted from his blade. Fingerprint Analysis: How It’s Done. Refua umishpat 25 143. SANGERO fingerprints. Are These Crime Drama Clues Fact or Fiction? – Phenomena: Gory Details. I’m often just as surprised by what forensic scientists can’t do as by what they can. 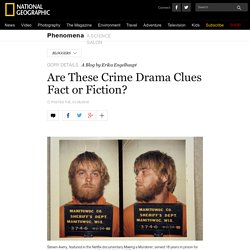 In the Netflix documentary Making a Murderer, for instance, the question of whether police planted the main character’s blood at a crime scene comes down to whether or not the FBI can detect a common laboratory chemical called EDTA in a bloodstain. On a TV crime show, this would be a snap. The test would take about five minutes and would involve inserting a swab into a magic detector box that beeps and spits out an analysis of every substance known to humankind. Richard III - Family tree/lines of descent - Michael Ibsen - University of Leicester. The University of Leicester’s Department of Genetics is famous as the birthplace of DNA fingerprinting, discovered here by Professor Sir Alec Jeffreys in 1984 and widely used by governments and law enforcement since then. However, a different approach was required when the Department of Genetics’ Dr Turi King set out to investigate whether Skeleton 1 from the Greyfriars site was the remains of Richard III involving possible connections between individuals born five centuries – and many generations later – than Richard.

DNA Forensics: Dr. Jeffreys demonstrated that a genetic or DNA fingerprint is specific to each individual. DNA Fingerprinting In September 1984, Dr. DNA Forensics: The latest national and international news about DNA databases and forensic science. DNA Forensics. Paternity Testing with STR Data. Paternity Testing with STR Data In this activity, you will assume the role of a Human Geneticist in a DNA Paternity Testing Laboratory. You have just obtained the DNA Profiles for Bob, Anne, David and Katie. You also have information about Bob's parents, Fred and Norma. In your role as a Human Geneticist, it is not essential that you know all of the laboratory techniques used to obtain the Blackett family genotypes. Your work is based on understanding the principles of Mendelian Genetics as applied to STR loci. Bloodstain pattern analysis.

Bloodstain pattern analysis (BPA), one of several specialties in the field of forensic science, inolves the study and analysis of bloodstains at a known or suspected violent crime scene with the goal of to helping investigators draw conclusions about the nature, timing and other details of the crime. The use of bloodstains as evidence is not new; however, the application of modern science has brought it to a higher level since the 1970s and '80s. New technologies, especially advances in DNA analysis, are available for detectives and criminologists to use in solving crimes and apprehending offenders.

The science of bloodstain pattern analysis applies scientific knowledge from other fields to solve practical problems. Bloodstain pattern analysis draws on the scientific disciplines of biology, chemistry, mathematics and physics. History[edit] Gary Dotson. Gary Dotson (born circa 1957)[1] is an American man who was the first[2] person to be exonerated of a criminal conviction by DNA evidence.[3] In May 1979, he was found guilty and sentenced to 25 to 50 years' imprisonment for rape, and another 25 to 50 years for aggravated kidnapping, the terms to be served concurrently. This conviction was upheld by the appellate court in 1981.

In 1985, the accusing witness recanted her testimony, which had been the main evidence against Dotson. He was not exonerated or pardoned at that time, but due to popular belief that he was a victim of a false rape accusation, Dotson went through a series of paroles and re-incarcerations until DNA evidence proved his innocence in 1988.

Crime scene. A crime scene is a location where a crime took place (or another location where evidence of the crime may be found), and comprises the area from which most of the physical evidence is retrieved by law enforcement personnel, crime scene investigators (CSIs) or in rare circumstances, forensic scientists. CSI effect. CSI: THE EXPERIENCE - Press / Media, Exhibit Walk-Through. CSI: THE EXPERIENCE — Web Adventures. Serial Killers, Part 5: Wayne Williams and the Atlanta Child Murders. Richard III: The twisted bones that reveal a king. Scientists Reconstruct Faces of Civil War Sailors - USS Monitor. The Truth About 4 Common Forensics Methods.