Pathways to Bliss: Joseph Campbell on Why Perfectionism Kills Love and How to Save Your Relationship 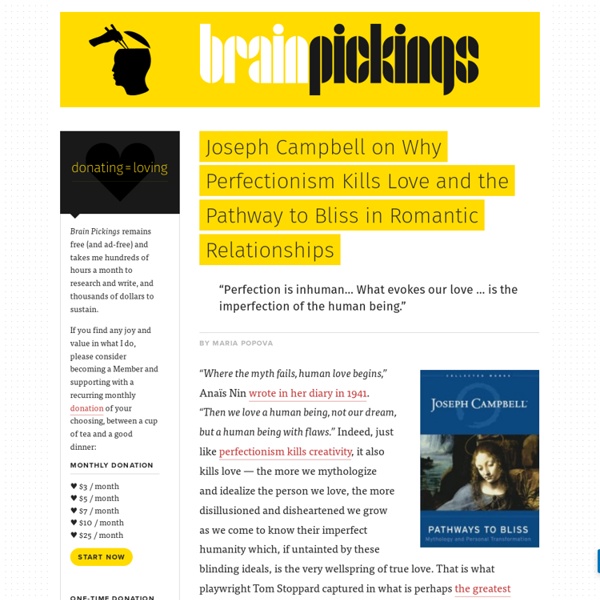 “Where the myth fails, human love begins,” Anaïs Nin wrote in her diary in 1941. “Then we love a human being, not our dream, but a human being with flaws.” Indeed, just like perfectionism kills creativity, it also kills love — the more we mythologize and idealize the person we love, the more disillusioned and disheartened we grow as we come to know their imperfect humanity which, if untainted by these blinding ideals, is the very wellspring of true love. That is what playwright Tom Stoppard captured in what is perhaps the greatest definition of love, in his notion of “the mask slipped from the face,” the stripping of the idealized projection, the surrender to the beautiful imperfection of a human being. His focus on marriage is especially timely and poignant today, when the institution of marriage is being reimagined to be more inclusive and more just, which also means it’s being challenged to rise to higher standards of integrity. Campbell writes: Two people meet and fall in love.

Why are our kids so miserable? Melbourne, Australia He admits it: José Lopez always dreamed of going to America and using his training in information technology to make his fortune. But even if he hadn’t been put off by the rhetoric from across the border about building walls and banning people based on their religion, there were 52 times more applicants for visas to emigrate to the United States from his native Mexico last year than were made available under a complex quota system. And even if a technology company agreed to sponsor him, that route, too, was closed off when the number of workers who applied for those kinds of visas in the first week was three times the annual cap. Which is why Lopez has come to find himself in a classroom in Melbourne boning up on his English and preparing for a new life in Australia, a country that invites skilled, well-educated immigrants like him with comparatively open arms.

How to Find Your Purpose and Do What You Love “Find something more important than you are,” philosopher Dan Dennett once said in discussing the secret of happiness, “and dedicate your life to it.” But how, exactly, do we find that? Surely, it isn’t by luck. I myself am a firm believer in the power of curiosity and choice as the engine of fulfillment, but precisely how you arrive at your true calling is an intricate and highly individual dance of discovery. Oliver Sacks on Storytelling, the Curious Psychology of Writing, and What His Friendship with the Poet Thom Gunn Taught Him About Creativity and Originality by Maria Popova “The act of writing is an integral part of my mental life; ideas emerge, are shaped, in the act of writing… a special, indispensable form of talking to myself.” Who we are and who we become is in large part the combinatorial product of the people and ideas we surround ourselves with — what William Gibson so memorably termed our “personal micro-culture” and Brian Eno called “scenius.” The more different those people are from us, the more they expand the echo chamber of our own mind, the more layered and beautiful the symphony of the spirit becomes. Nowhere is this self-expansion via relationship more evident than in the friendships between great artists and great scientists, one of the most heartening examples of which is the friendship between legendary neurologist Oliver Sacks and the poet Thom Gunn. In On the Move: A Life (public library) — the immeasurable and incompressible rewards of which I have previously extolled at great length and with great love — Dr.

You probably know to ask yourself, “What do I want?” Here’s a way better question Everybody wants what feels good. Everyone wants to live a carefree, happy and easy life, to fall in love and have amazing sex and relationships, to look perfect and make money and be popular and well-respected and admired and a total baller to the point that people part like the Red Sea when you walk into the room. Everyone would like that — it’s easy to like that. If I ask you, “What do you want out of life?” and you say something like, “I want to be happy and have a great family and a job I like,” it’s so ubiquitous that it doesn’t even mean anything. A more interesting question, a question that perhaps you’ve never considered before, is what pain do you want in your life? The 12th-Century Jewish Philosopher Moses Maimonides on Truth, Doubt, and the... “Our thought should be empty, waiting, not seeking anything, but ready to receive in its naked truth the object that is to penetrate it,” the great French philosopher and mystic Simone Weil wrote in contemplating the rarest and purest form of human thought. A generation later, Hannah Arendt cautioned that “the basic fallacy … is to interpret meaning on the model of truth.” How to bridge the gap between meaning, which is the human interpretation of truth, and that naked truth itself is perhaps the most abiding challenge in reconciling the human intellect with the human spirit. That’s what the twelfth-century Jewish philosopher and astronomer Moses Maimonides examined centuries before Weil and Arendt in The Guide for the Perplexed (public library) — a masterwork of philosophy and rhetoric, dedicated to those “lost in perplexity and anxiety,” so enduring and influential that it has inspired works as diverse as E.F.

Watch One of the Clearest, Most Helpful Explanations of Story Structure Ever There are countless voices out there explaining various methods for unpacking your narrative. Plot points, acts, and Hero's Journeys -- so many concepts. Which one do you choose? That's actually a bit of a trick question, because there's no one structural paradigm that wins out over the others. When it comes to screenwriting, rules and rigidity don't really translate well -- I suppose not even when it comes to structure. However, unless you're working on an avant-garde or experimental piece of cinema, having a clear structure is ideal in order to help your audience understand what's going on in your story.

How to Raise Nature-Loving Kids in a Media-Loving World – 365Outside “It smells good out!” Junior declared, standing in the open doorway after dinner. It had been an unseasonably mild week, the first hints of spring revealing themselves in a warm southerly breeze and jackets left hanging inside. David Foster Wallace on Why You Should Use a Dictionary, How to Write a Great Opener, and the Measure of Good Writing By Maria Popova “Readers who want to become writers should read with a dictionary at hand,” Harvard psycholinguist Steven Pinker asserted in his indispensable guide to the art-science of beautiful writing, adding that writers who are “too lazy to crack open a dictionary” are “incurious about the logic and history of the English language” and doom themselves to having “a tin ear for its nuances of meaning and emphasis.” But the most ardent case for using a dictionary came more than a decade earlier from none other than David Foster Wallace. In late 1999, Wallace wrote a lengthy and laudatory profile of writer and dictionary-maker Bryan A. Garner.

Top 40 Useful Sites To Learn New Skills The web is a powerful resource that can easily help you learn new skills. You just have to know where to look. Sure, you can use Google, Yahoo, or Bing to search for sites where you can learn new skills , but I figured I’d save you some time. Here are the top 40 sites I have personally used over the last few years when I want to learn something new. 20 Manageable Things 20-Somethings Can Do In 2016 To Be Successful You have no idea how old you are. Yes, you know the number of years you’ve been alive, but your true age is equal to the amount of years you have left. If you’re 26 and you’re going to die next week, you’re older than an 80 year old person who has a couple of years left to live. People sit on two sides of the fence when it comes to us twenty somethings.

An Antidote to the Age of Anxiety: Alan Watts on Happiness and How to Live with Presence “How we spend our days is, of course, how we spend our lives,” Annie Dillard wrote in her timeless reflection on presence over productivity — a timely antidote to the central anxiety of our productivity-obsessed age. Indeed, my own New Year’s resolution has been to stop measuring my days by degree of productivity and start experiencing them by degree of presence. But what, exactly, makes that possible? This concept of presence is rooted in Eastern notions of mindfulness — the ability to go through life with crystalline awareness and fully inhabit our experience — largely popularized in the West by British philosopher and writer Alan Watts (January 6, 1915–November 16, 1973), who also gave us this fantastic meditation on the life of purpose. If to enjoy even an enjoyable present we must have the assurance of a happy future, we are “crying for the moon.”