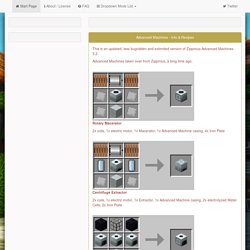 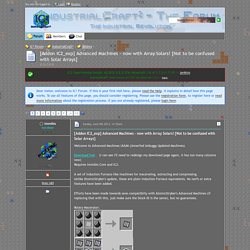 Download link (I can see I'll need to redesign my download page again, it has too many columns now) Requires Immibis Core and IC2. A set of Induction Furnace-like machines for macerating, extracting and compressing. Unlike AtomicStryker's update, these are plain Induction Furnace equivalents. No nerfs or extra features have been added. Efforts have been made towards save-compatiblity with AtomicStryker's Advanced Machines (if replacing that with this, just make sure the block ID is the same), but no guarantees. Rotary Macerator: [Addon IC2_exp] Advanced Repulsion Systems - Addons. DownloadRequires IC2 and Immibis Core (which is on the same download page) Mod spotlight by Edoreld: 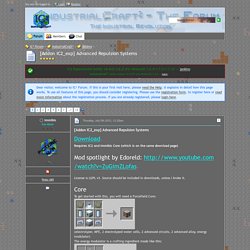 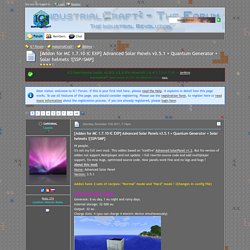 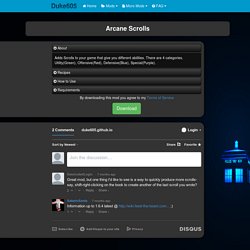 There are 4 categories, Utility(Green), Offensive(Red), Defensive(Blue), Special(Purple). Recipes Name: Arcane TomeInfo: Research, write, and check recipes using this item How to Use To research a scroll simply go to the page you want in the tome and click on the scroll. To write a scroll click on the “Write Scrolls” text in the table of contents, select your scroll(you can scroll through the unlocked list with your up and down arrow keys or the scroll wheel), type in how many you want then click write. The scroll charge cost will be displayed when you mouse over it. Anchor stones are a quick way to travel between different points. Archimedes' Ships v1.7 - Banking ships! Aroma1997s Mods (BetterChests, Mining World Mod, Aroma1997Core, CompactWindmills, AromaBackup, Portable Recharger) 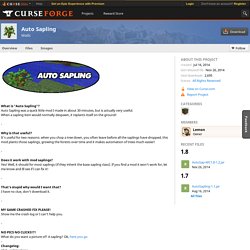 Auto Sapling was a quick little mod I made in about 30 minutes, but is actually very useful. When a sapling item would normally despawn, it replants itself on the ground! Why is that useful? It's useful for two reasons: when you chop a tree down, you often leave before all the saplings have dropped, this mod plants those saplings, growing the forests over time and it makes automation of trees much easier! 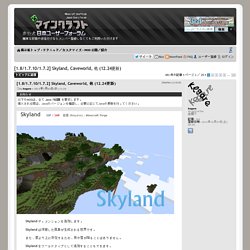 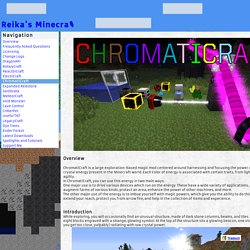 Each color of energy is associated with certain traits, from light to protection to agility. In ChromatiCraft, you can use this energy in two main ways.One major use is to drive various devices which run on the energy. These have a wide variety of applications, and can be used to augment farms of various kinds, protect an area, enhance the power of other machines, and more.The other major use of the energy is to imbue yourself with magic powers, which give you the ability to do things like substantially extend your reach, protect you from arrow fire, and help in the collection of items and experience. Introduction While exploring, you will occasionally find an unusual structure, made of dark stone columns, beams, and tiles. 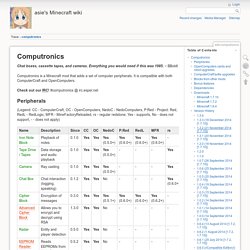 Everything you would need if this was 1985. ~ BBoldt Computronics is a Minecraft mod that adds a set of computer peripherals. It is compatible with both ComputerCraft and OpenComputers. Check out our IRC! Craft++: A simple vanilla enhancing mod, presented by Team Melanistic! Craftable Animals v2.4.3.0 + MoCreature Extension v1.2.0.0. [1.7/1.6] Craftable Horse Armor Normal and Hardcore - v1.1.2.0 (+100.000 Downloads) CraftHeraldry - Coats of Arms in Minecraft (Over 1200 different choices, now in 1.7!) Crafting Pillars mod - Multiplayer FIX! CritterPet - Reika's Minecraft. Simply craft the taming wand and load it with the appropriate items. 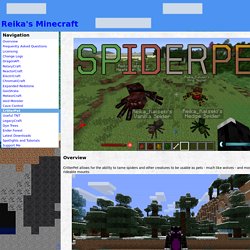 Dynamic Tanks 2.1 - Store Fluids in an Infinite Combination of Tank Shapes and Sizes! [FTB Horizons/Monster] ElectriCraft - Reika's Minecraft. Overview ElectriCraft adds a new way to transport and store RotaryCraft power. Like ReactorCraft, this mod is dependent on RotaryCraft. ElectriCraft adds electrical motors and generators, as well as several tiers of wires. It follows a simplified version of the behavior of real-world electricity, where voltage and current are two distinct parameters, making this power system 3D like that of RotaryCraft.

Voltage is generated by rotational speed, while current is generated by torque into the generator. ElectriCraft also adds batteries to store power; they charge from the sides or below, and can emit power from the top when given a redstone signal. ElectriCraft also adds two wire control devices. Wire Types. [IndustrialCraft 2][Thaumcraft 4] Electro-Magic Tools! - Updated 28/09/2014. Overview - EnderTech - Mods - Projects - Minecraft CurseForge. Introduction EnderTech is intended to be a tech and Ender themed mod, starting at around Thermal Expansion's end-game. It will contain powerful, relatively expensive mechanics, with some configurability. The defaults will maintain a balance that makes my own game more fun. Some features are often in development, so try to use Promoted builds in your world. It's still no guarantee that a recipe or cost won't change, but I'll try to make sure things carry over where possible.

Go to #EnderTech on Esper if you have any questions or concerns (especially if you're considering including it in a larger modpack), or just want to shout at me for doing something wrong. Links Permissions Yes, you can use it in your (public) mod pack, as long as: You aren't charging for access to items or the mod itself (Mojang's ToS applies),You don't modify the Jar (it is appropriately signed and modifying it would break this). Enhanced Biomes 2.5 - Nearly 100 new biomes (20/10/14) [1.7.10/1.7.2] [Forge] [SSP/LAN/SMP] AbyssalCraft V.1.8.0.1! +103K Downloads! Advanced Generators » BDew.