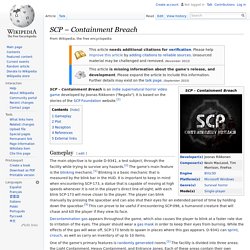 It is based on the stories of the SCP Foundation website.[1] Gameplay[edit] The main objective is to guide D-9341, a test subject, through the facility while trying to survive any hazards.[2] The game's main feature is the blinking mechanic.[1] Blinking is a basic mechanic that is measured by the blink bar in the HUD. It is important to keep in mind when encountering SCP-173, a statue that is capable of moving at high speeds whenever it is not in the player's direct line-of-sight; with each blink SCP-173 will move closer to the player. The player can blink manually by pressing the spacebar and can also shut their eyes for an extended period of time by holding down the spacebar.[3] This can prove to be useful if encountering SCP-096, a humanoid creature that will chase and kill the player if they view its face. Counter-Strike Facts: Our Top Ten - TGN Central. If you’re tired of seeing all the modern-day terrorism-filled multiplayer shooters, you probably have Counter-Strike to thank for it. 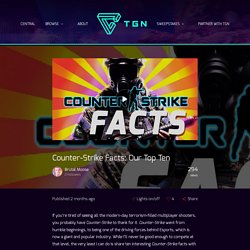 Counter-Strike went from humble beginnings, to being one of the driving forces behind Esports, which is now a giant and popular industry. While I’ll never be good enough to compete at that level, the very least I can do is share ten interesting Counter-Strike facts with you. 10. Started As A Mod Counter-Strike, like so many things from Valve, originally began as a mod of Half-Life in 1999. 9. According to Le, co-creator of the original Counter-Strike mod, the game focuses on terrorists and counter-terrorists because, at the time, it was an uncommon theme. 8. All of the original levels for Counter-Strike were made by the community and submitted to co-creator Jess Cliffe to be added into the game. 7.

“De_Dust”, one of the most popular maps in Counter-Strike, was inspired by two early-release screenshots of Team Fortress 2. 6. 5. 4. 3. 2. GoosemanII comments on IAm Minh Le, aka. Gooseman, co-creator of the original Counter-Strike and now Tactical Intervention, AMA! Sonic Dreams Collection. Development[edit] In a press release posted to "hedgehog.exposed", the website on which Sonic Dreams Collection was released, independent developers and self-styled "hacker supergroup" Arcane Kids claimed that they obtained a Sega Dreamcast development kit from eBay and unearthed four game prototypes from its contents, as well as other files that indicated the existence of a secret Sega development studio called MJSTUDIO.[1] Arcane Kids posted the games and files online as a protest against Sega's apparent attempts to keep the games' existence a secret.[2] However, the press kit also disclaims that Sonic Dreams Collection is a work of parody, discounting any official affiliation with Sega.[3] Gameplay[edit] Sonic Dreams Collection consists of four minigames; Make My Sonic, Eggman Origin, Sonic Movie Maker and My Roommate Sonic. 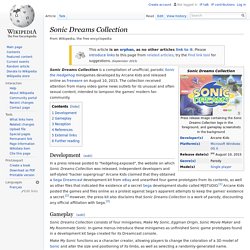 In-game menus introduce these minigames as unfinished Sonic game prototypes found in a development kit Sega created for its Dreamcast console. M.U.G.E.N Characters Hyper Combo Collection [ Part 1 ] M.U.G.E.N. Gameplay[edit] The engine uses 4 directional keys along with 7 buttons for gameplay (X, Y, Z, A, B, C and Start), in order to accommodate six-button fighters which use three punches, three kicks and a start button.[1] However, characters do not necessarily use all seven buttons, nor need to follow a traditional six- or four-button format. 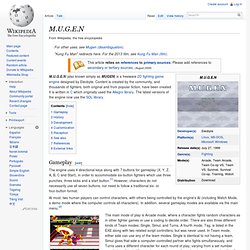 At most, two human players can control characters, with others being controlled by the engine's AI (including Watch Mode, a demo mode where the computer controls all characters). In addition, several gameplay modes are available via the main menu.[2] The main mode of play is Arcade mode, where a character fights random characters as in other fighter games or use a coding to decide order.

There are also three different kinds of Team modes: Single, Simul, and Turns. In Survival mode, there is an endless stream of opponents, fighting them either one by one or two in a Simul match. The Perfect Game Of Thrones Video Game Already Exists. Someone Made A New Portal 2 Campaign... Without Portals. Their original concept was so good that Valve hired them to integrate the mechanics into Portal 2. 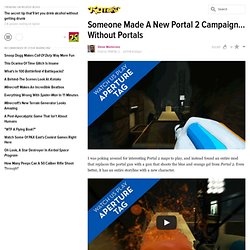 I liked the original game they made. Either way, I want this now! So apparently if you want to work for Valve, go to Digipen. The people who made the game that became Portal were Digipen students too, no? The rule to work at Valve is to just make a decently cool idea. I like Valve games, but seriously, they're lazy. You're confusing lazy with smart.