Ideas for Using Minecraft in the Classroom 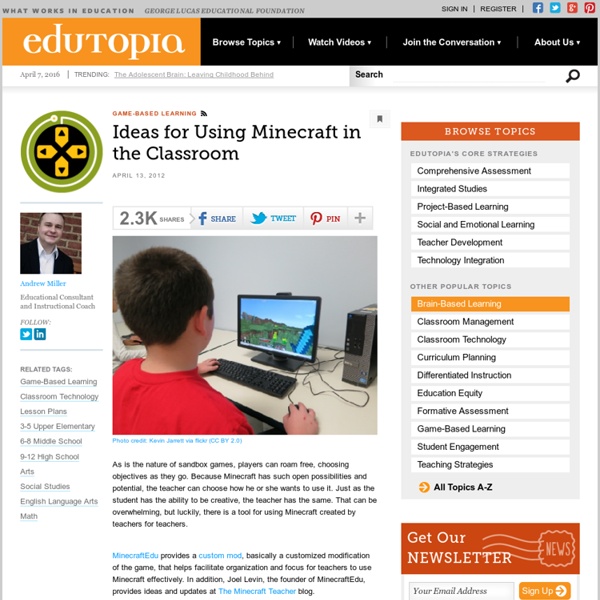 As is the nature of sandbox games, players can roam free, choosing objectives as they go. Because Minecraft has such open possibilities and potential, the teacher can choose how he or she wants to use it. Just as the student has the ability to be creative, the teacher has the same. That can be overwhelming, but luckily, there is a tool for using Minecraft created by teachers for teachers. MinecraftEdu provides a custom mod, basically a customized modification of the game, that helps facilitate organization and focus for teachers to use Minecraft effectively. In addition, Joel Levin, the founder of MinecraftEdu, provides ideas and updates at The Minecraft Teacher blog. For those noobs out there that need a push in the right direction, here are some introductory project or lesson ideas. 1) Explore Real Life Buildings There are many already-created structures that you can import into the game and have students explore. 2) Practice Ratio and Proportion 3) Learn About Survival

Minecraft in education Minecraft can be an educational tool that facilitates cooperation and teamwork among players. Educational benefits[edit | edit source] Minecraft can have huge educational benefits for children; it can help teach numerous subjects both with and without adult involvement. Microsoft replacing MinecraftEDU with new education edition A new education experience is coming to Minecraft Starting this summer, classrooms hooked on MinecraftEDU will be given the option of migrating to a new education-focused Minecraft title, recently announced by Microsoft who has acquired the rights to MinecraftEDU from Teacher Gaming, a Finnish company. The rebranded title, called Minecraft: Education Edition, will launch as a free trial this summer, and all MinecraftEDU subscribers will receive a yearlong subscription to the new game (they can also continue to use MinecraftEDU). In the meantime, Microsoft is reworking and expanding the new education edition especially for classrooms. In a statement, Microsoft alluded to working on a “transition plan” with Teacher Gaming, but said that further details — including if and when MinecraftEDU would be absorbed into the new title — would be worked out in the coming months. MinecraftEDU began in 2011 and has reached thousands of classrooms in more than 40 countries.

Teaching with MinecraftEdu - MinecraftEdu wiki Since late 2011, MinecraftEdu has made its way to thousands of classrooms around the world. It has been used to teach all kinds of skills and subjects from math to foreign languages to social justice to fair trade. The overarching idea of MinecraftEdu is to retain the magic of original Minecraft while adding elements that facilitate its use in classroom. MinecraftEDU: Minecraft for the Classroom It's been almost a year since I first wrote about the work of Joel Levin (aka "The Minecraft Teacher") bringing the 3D world-building game Minecraft into his second-grade classroom. Much has changed since then -- the full release of the PC version of the game, for starters. Mojang co-founder "Notch" stepping down as the lead developer of Minecraft (that is sort of "inside baseball" information, I suppose). And Levin himself co-founding a startup -- TeacherGaming -- the only company sanctioned by Mojang as an official reseller of the game. Levin's still teaching too, but he's also hard at work helping other educators implement Minecraft in their own classes.

Like Minecraft? Try these 7 engaging world builders, too Eco, Oort Online, and a host of virtual worlds to keep students busy, and learning With the popular explosion of Minecraft among middle schoolers and beyond, it’s worth noting that it isn’t the only open world virtual environment with educational value. Nor is it always the most ideal game for teaching every concept, leading other games to pick up the slack. As a result, inspired educators and students are taking notice and branching out.

minecraftinschool This wiki is devoted to hosting ideas, lessons, implementation strategies and more related to using the game, Minecraft in a school setting Whether you use it in a computer/gaming club, as part of your regular curricular instruction, or even at home with your own children, Minecraft's simple yet scalable "sandbox" virtual environment can be an excellent tool for engaging student learning. The open-ended nature of the game lends it to application in a variety of subject areas. Game-based learning, virtual worlds, and simulations are emerging tools for reaching our learners. That's why this wiki was created.

8 ways Minecraft works on your brain Recently I’ve spent some time reading parenting websites about Minecraft. What is said is often repetitive, aggregated and lacks much substance. If you are a parent, or Minecraft player, then I hope this post will provide you with some further ideas about how the game works on our minds. The thing which most articles omit is understanding of why imagination is a primary trigger for learning. Wherever we are, in school or at home, the immediate environment can either support or stifle children’s imaginative abilities. For example, copying notes from a wipeboard is submissive. Minecraft in Education Minecraft in Education: 30 ideas for using Minecraft in the classroom It is well documented how using games in a classroom context can facilitate collaborative learning, promote problem solving and stimulate an engaging learning environment. One methodology that demonstrates all these elements is Game Based Learning. What is Games Based Learning?Not to be confused with Gamification, Game Based Learning (GBL) is the process of using games to achieve a defined set of learning outcomes.

Minecraft Lesson Plans Minecraft allows players to explore, interact with, and modify a dynamically-generated map made of one-cubic-meter-sized blocks. The environment features plants, mobs, and items. Some activities in the game include mining for ore, fighting hostile mobs, and crafting new blocks and tools by gathering resources found in the game. The game's open-ended model allows players to create structures, creations and artwork on multiplayer servers or on their own single player maps. Minecraft’s Notch is the new Rodin. Minecraft again today. Just a quick post as I wait for a machine to finish a dull task. I thought I’d introduce parents to a theory of learning called “contructionism”.