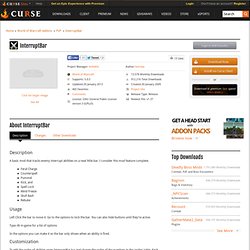 I consider this mod feature complete. Feral Charge Counterspell Pummel Kick, and Spell Lock Mind Freeze Skull Bash Rebuke Usage Left Click the bar to move it. Type /ib in-game for a list of options In the options you can make it so the bar only shows when an ability is fired. Customization To edit the order of abilities open InterruptBar.lua and change the order of the numbers in the 'order' table. Adding new abilities isn't intended. Premo Power - Buffs & Debuffs. Hear Kitty - Audio & Video. Hear Kitty plays soothing and distinct orchestral sounds as you gain and spend your combat resources. 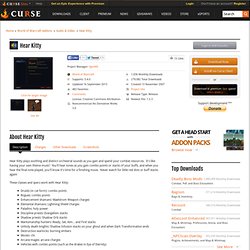 It's like having your own theme music! You'll hear tones as you gain combo points or stacks of your buffs, and when you hear the final note played, you'll know it's time for a finishing move. Never watch for little red dots or buff stacks again! These classes and specs work with Hear Kitty: Druids (in cat form): combo points Rogues: combo points Enhancement shamans: Maelstrom Weapon charges Elemental shamans: Lightning Shield charges Paladins: holy powerDiscipline priests: Evangelism stacks Shadow priests: Shadow Orb stacks Marksmanship hunters: Ready, Set, Aim... and Fire! Additional downloads available Hear Kitty official sound packsThese sound packs for Hear Kitty provide new sound effects so you can better customize Hear Kitty to your liking. Version 1.5.3 For Arcane Charges, Hear Kitty will play the proper tones. Version 1.5.2 Version 1.5.1 Version 1.5. Priest Friend - Buffs & Debuffs. This addon helps priests manage their buffs, notifies them when their shackle breaks, reminds you to keep your inner fire up, helps manage their 3 min fear ward, and notifies you when someone gets a disease or magic debuff so you can dispell it. 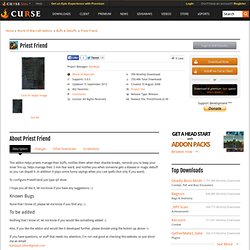 In addition it plays some funny sayings when you cast spells (but only if you want). To configure PriestFriend just type /pf show I hope you all like it, let me know if you have any suggestions :-) Known Bugs None that I know of, please let me know if you find any :-) PlateBuffs - Buffs & Debuffs. Inner Peace - Class.

CCReport - PvP. With the release of Cataclysm, a lot of new spells have been added and some old ones have had their IDs changed seeing as now there is only one rank of every spell. 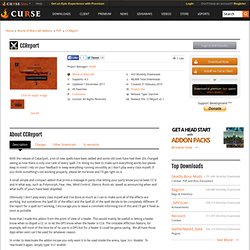 I'm doing my best to make sure everything works but please keep in mind I rely on your feedback to keep everything running smoothly as I don't play every class myself. If you think something's not working properly, please let me know and I'll get right on it. A small simple and compact addon that prints a message in party chat letting your party know you've been CC'd and in what way, such as Polymorph, Fear, Hex, Mind Control, Silence, Roots etc aswell as announcing when and what buffs of yours have been dispelled.

Obviously I don't play every class myself and I've done as much as I can to make sure all of the effects are working, but sometimes the Spell ID of the effect and the Spell ID of the spell decide to be completely different. Note that I made this addon from the point of view of a healer. PvP Helper - PvP. BattlegroundTargets - PvP. Battle Herald - PvP. Incoming - PvP. - Ever been in a battleground defending a flag just to be jumped by a rogue/druid and then have the flag captured, cause you had no time to call for help? 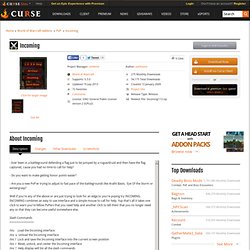 - Do you want to make getting honor points easier? - Are you a new PvP'er trying to adjust to fast pace of the battlegrounds like Arathi Basin, Eye Of the Storm or wintergrasp? Well if you're any of the above or are just trying to look for an edge to you're pvping try INCOMING. INCOMING combines an easy to use interface and a simple mouse to call for help. Yup that's all it takes one click to warn you're fellow PvPers that you need help and another click to tell them that you no longer need any so that they can become useful somewhere else. 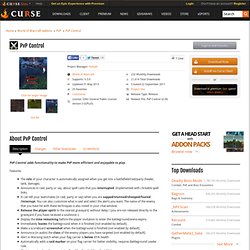 Features: The role of your character is automatically assigned when you get into a battlefield/raid/party (healer, tank, damage). Announces in raid, party or say, about spell casts that you interrupted. Implemented with clickable spell links. It can tell your teammates (in raid, party or say) when you are sapped/stunned/sheeped/feared/interrupt. ALL the added features can be enabled or disabled in the options. 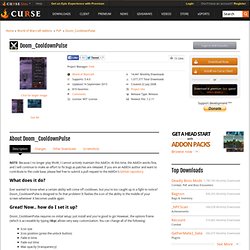 At this time, the AddOn works fine, and I will continue to make an effort to fix bugs as patches are released. WeakAuras - Class. WeakAuras Tutorial Day 1: Simple Tracking for Buffs and Debuffs. TellMeWhen - Combat. TellMeWhen provides visual, auditory, and textual notifications about cooldowns, buffs, and pretty much every other element of combat. 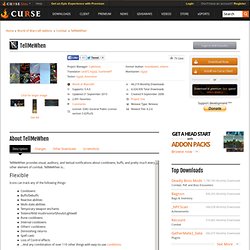 Icons can be set to show or hide based on the status of their basic element and their usability based on range, duration, stacks, and resources. All icons can show the standard cooldown animation to display their status, and are compatible with OmniCC. While these examples may help you get started, the best way to use TellMeWhen is to use your imagination! For more examples, visit the TellMeWhen examples forum. Power Auras Classic v4 - MoP Version - PvP. Designed to give visual or audible cues to the user in response to in-game events, such as gaining buffs or debuffs. 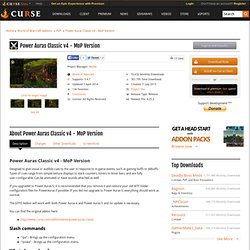 Types of cues range from simple texture displays to stack counters, timers to timer bars, and are fully user-configurable. Can be animated or have sounds attached as well. If you upgraded to Power Auras 5, it is recommended that you remove it and restore your old WTF folder configuration files for PowerAuras if possible. If you did not upgrade to Power Auras 5, everything should work as normal.

The GTFO Addon will work with both Power Auras 4 and Power Auras 5 and no update is necessary. MikScrollingBattleText - PvP. Version 5.7.131 fixes the font changing issue introduced by Patch 5.4. 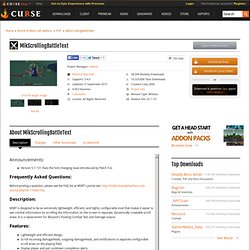 Frequently Asked Questions: Before posting a question, please see the FAQ list at MSBT's portal site. Description: MSBT is designed to be an extremely lightweight, efficient, and highly configurable mod that makes it easier to see combat information by scrolling the information on the screen in separate, dynamically creatable scroll areas. It is a replacement for Blizzard's Floating Combat Text and Damage output. Carbonite - Map & Minimap. CARBONITE® is a multi feature addon developed by game industry veterans to improve and enhance the game playing experience of World of Warcraft.

Please visit Carbonite's official support forums for technical support, bug reports, comments, suggestions, etc. Map - The Carbonite map gives you all the information you need in one easy to use and flexible Google like map. Move, size or zoom it the way you like. Carbonite supports the Blizzard maps added for WotLK and most Cataclysm instances. Right click an instance location on the map and "Toggle Instance Map" or enter the instance for it to be drawn on the Carbonite map.