Highlights: China celebrates 70th anniversary with biggest ever military parade. Chinese Communist Party introduces new rules on what members can say as it ‘boosts internal democracy’ Pretty Lady Cadres. In early February, at the beginning of the outbreak of the deadly COVID-19 virus in China, Wang Fang, a local Communist Party secretary, was working around the clock. 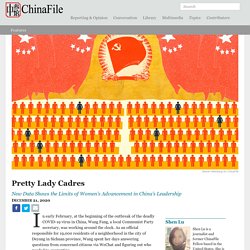 As an official responsible for 19,000 residents of a neighborhood in the city of Deyang in Sichuan province, Wang spent her days answering questions from concerned citizens via WeChat and figuring out who needed to quarantine. In a post she published on the Sichuan Provincial Women’s Federation’s official WeChat account, Wang outlined a tightly scheduled 14-hour day. She said the responsibilities she shouldered as a female Party member at the local level outweighed the fears and worries of motherhood. Across the country, the COVID outbreak that began spreading in January brought a spotlight to women like Wang. Chinese state media responded accordingly: eulogizing the bravery of female officials and healthcare workers. 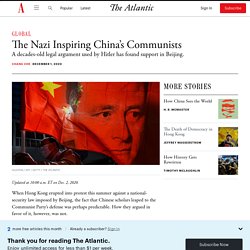 The limited tolerance China had toward dissent has all but dissipated, while ostensibly autonomous regions (geographically as well as culturally), including Xinjiang, Inner Mongolia, and Hong Kong, have seen their freedoms curtailed. All the while, a new group of scholars has been in ascendance. Known as “statists,” these academics subscribe to an expansive view of state authority, one even broader than their establishment counterparts.

Only with a heavy hand, they believe, can a nation secure the stability required to protect liberty and prosperity. As a 2012 article in Utopia, a Chinese online forum for statist ideas, once put it, “Stability overrides all else.” Prioritizing order to this degree is anathema to much of the West, yet perspectives such as these are not unprecedented in Western history. That affinity is no accident. Read: Trump’s state of exception. Cai Xia: An Insider Breaks with the Chinese Communist Party. When Xi Jinping came to power in 2012, I was full of hope for China. 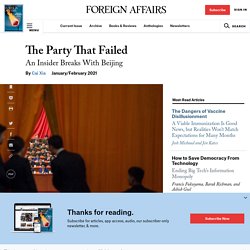 As a professor at the prestigious school that educates top leaders in the Chinese Communist Party, I knew enough about history to conclude that it was past time for China to open up its political system. After a decade of stagnation, the CCP needed reform more than ever, and Xi, who had hinted at his proclivity for change, seemed like the man to lead it. 点击此链接阅读中文版 (Read in Chinese). By then, I was midway through a decades-long process of grappling with China’s official ideology, even as I was responsible for indoctrinating officials in it. Once a fervent Marxist, I had parted ways with Marxism and increasingly looked to Western thought for answers to China’s problems. Stay informed. In-depth analysis delivered weekly. U.S. Wants to Bar Members of China’s Communist Party. Who Are They? As the Trump administration weighs a travel ban against the members of the Chinese Communist Party and their relatives, it is considering cutting off a vast sector of Chinese society — 92 million people — that often defies stereotypes, including those who walk the halls of power in Beijing, supervise China’s schools and run major companies. 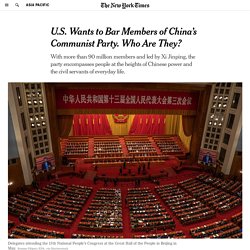 Barring them would change the topography of the U.S. -China relationship in the most prosaic of ways: It would cut off huge numbers of regular Chinese who, in pre-coronavirus pandemic times, traveled to the United States by the millions to do business, see the sights, shop at high-end department stores and study at some of the country’s most elite universities. Blocking the party members would not only turn off an economic spigot for the United States, but also plunge the relationship between the world’s two largest economies into a new phase of deeper isolation. Who are the members of the Communist Party? Here’s what we know. Mr. Yet even as Mr. Members Only: A Look at Recruitment Trends in the CCP.