China’s Overrated Technocrats. Many Western parliaments are dominated by people with law degrees, but China’s leaders are mostly trained as engineers and scientists—or so goes conventional wisdom. 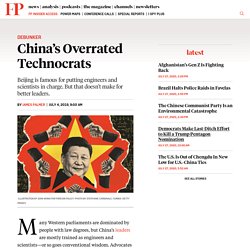 Advocates for this supposed Chinese approach, such as the entrepreneur Elon Musk, argue that it produces leaders who adopt a pragmatic and technocratic framework to solving problems. And those scientist-politicians, the theory goes, are more likely to govern efficiently, in part because they are unburdened by ideology. But advocates for China’s supposed technocracy are not only wrong about the background of Beijing’s current leadership. They are also fundamentally mistaken about how their training shapes policymaking. What Kind of Regime Does China Have? In order to understand how the United States and other Western countries should deal with China in the coming years, we need to understand what kind of society we are dealing with. 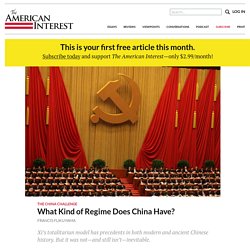 Such an understanding needs to be derived both from Chinese history and from its more recent behavior. We need to separate this discussion from the noise generated by the recent deterioration of U.S. -China relations. In trying to deflect attention from its own poor handling of the COVID-19 crisis, the Trump Administration has been needlessly provocative in its stance towards China, insisting, for example, that COVID-19 be referred to as the “Wuhan virus.” This is not a serious approach to policy and needs to be replaced by a more dispassionate assessment of where we stand. Xi Jinping is not the “president” of China. Most journalists like to think of themselves as skeptical of power and resistant to official narratives, particularly in this era of American politics. 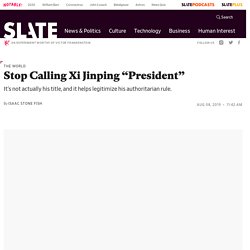 But American news networks, magazines, and newspapers have been spreading a pernicious piece of Chinese propaganda for years. It’s more subtle than Donald Trump’s bombast and, having gone mostly ignored, weakens American understanding of China. In their articles about the trade war, protests in Hong Kong, China’s human rights violations, and China’s global advances, every major American publication refers to Xi Jinping as China’s “president.” That is bizarre—because China has no president. Xi actually holds three key titles. Official Chinese propaganda outlets often mistranslate the chairman in that third title as president, when writing for foreign audiences. Just like no one in the United States calls Trump the chairman of America, no one in China calls Xi president. Why is this mistranslation pernicious and problematic?

Join Slate Plus. The Problem With the China Model. The ideological competition between democracy and authoritarianism was supposed to have died with the Cold War. 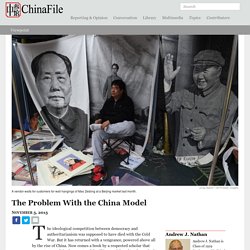 But it has returned with a vengeance, powered above all by the rise of China. Now comes a book by a respected scholar that purports to explain the secrets of the China model, and to show why it works better than liberal democracy. The Committee - MacroPolo. Encyclopedia of the Communist Party of China. INFOGRAPHIC: China’s Leaders of Party and State after the 13th NPC and CPPCC. PSC Member in Charge: Xi Jinping 习近平, Wang Huning 王沪宁 Lead Organ: CCP Central Committee Secretariat (中共中央书记处) 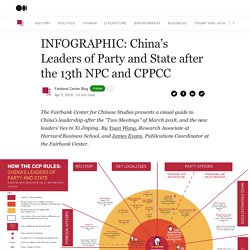 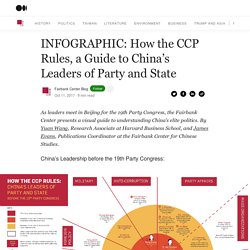 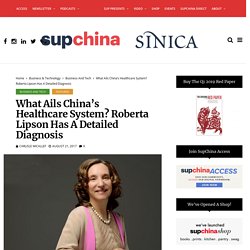 In 1981, she and Elyse Beth Silverberg co-founded Chindex, which sold American healthcare equipment to Chinese hospitals. In the 1990s, they pivoted the business to healthcare services, launching Beijing Family United Hospital, which has become the biggest foreign investor and operator of private hospitals in China. Roberta was listed as one of Beijing’s 20 most interesting people by the Beijinger in 2013, and she says she is a Beijinger at heart, having lived in the city longer than any other place in her life. How to get to the top of China's Communist Party. China's Communist Party is about to unveil the country's next generation of leaders.

Almost all will be career politicians who have risen through the ranks. But what are the secrets of success in one of the world's most rigid authoritarian systems? Start young Age is very important in China, and if you haven't been singled out for high office by the time you are in your mid-twenties, it's probably too late. The two men who are set to become China's new president and premier, Xi Jinping and Li Keqiang, both joined the Party aged 21 and have never worked outside it. Nowadays children get exposed to politics even earlier, starting from age six when they wear the distinctive red neckerchiefs of the Young Pioneers. To join the Party, you have to write an application letter to your local party cell, be accepted into a study group, have your thinking and background thoroughly examined, then be approved as a probationary member.

Joining is not easy. People want to join for different reasons.