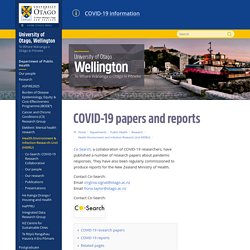 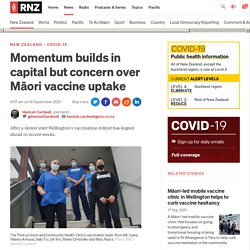 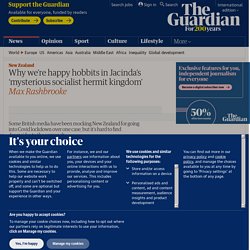 This phrase has been in my thoughts ever since global media outlets, most of them British, started mocking New Zealand’s Covid elimination strategy last week. I’m a proud British passport holder, and spent some of my best years in London, but not once during this pandemic have I ever wished to be anywhere except New Zealand. That holds true even though we’re now back in lockdown while the British freely enjoy what passes for a summer there. 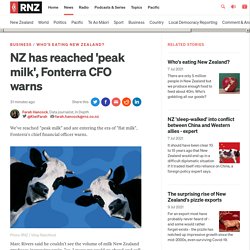 Photo: RNZ / Vinay Ranchhod Marc Rivers said he couldn't see the volume of milk New Zealand produces increasing again, "so, I guess we could go ahead and call that peak milk". Fiscal Policies Database. IMF Fiscal Affairs DepartmentJanuary 2021 About this Dataset: This database summarizes key fiscal measures governments have announced or taken in selected economies in response to the COVID-19 pandemic as of December 31, 2020, expanding the country coverage from the Annex in April 2020 Fiscal Monitor. 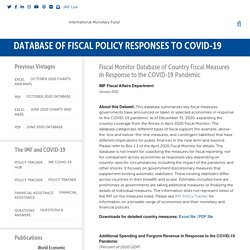 The database categorizes different types of fiscal support (for example, above-the-line and below-the-line measures, and contingent liabilities) that have different implications for public finances in the near term and beyond. Please refer to Box 1.1 of the April 2020 Fiscal Monitor for details. The database is not meant for classifying the measures for fiscal reporting, nor for comparison across economies as responses vary depending on country-specific circumstances, including the impact of the pandemic and other shocks. If border restrictions increase to combat new Covid-19 strains, what rights do returning New Zealanders have? By Kris Gledhill of As we know, getting into New Zealand during the Covid-19 pandemic is difficult. 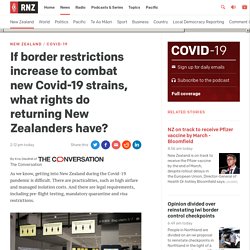 There are practicalities, such as high airfare and managed isolation costs. And there are legal requirements, including pre-flight testing, mandatory quarantine and visa restrictions. Nzs economic future. The Future of Food The Primary Sector. Protecting and Promoting Mental Wellbeing. The Environment is Now. NZs place in the world the implications of COVID 19. Social Cohesion in a Post Covid World. Koi Tū The Future is Now. The Green party won in Auckland by reaching beyond its own bubble. I was making toast in my tiny apartment kitchen four weeks ahead of election day. 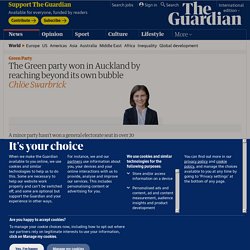 Not that I really had track of the days. They had melded into one ever-extending runway as Auckland went through its second Covid-19 lockdown and New Zealand’s election date was pushed back a month. We were a few months into an insurgent campaign for an electorate seat at the centre of the country’s largest city. Building support for transformational policies crucial to Labour's vision - Jessica Berentson-Shaw. By Jessica Berentson-Shaw* Opinion - To achieve their bold vision this Labour government is going to have to campaign for it. 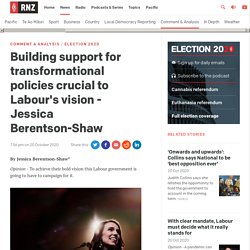 Photo: RNZ / Dom Thomas Before the October election, Jacinda Ardern laid out her vision for the New Zealand we could have by 2030 if people voted for Labour. It was hopeful and compelling to many New Zealanders. Labour's own experts say that to achieve this vision, they need to lead some major policy shifts. PwC Rebuild NZ 2020 report. New Zealand must cast off its worries about government debt in its Covid recovery. New Zealand’s response to the Covid-19 pandemic has been rightly praised. 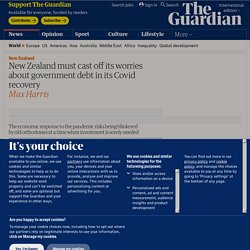 Nobel prize-winning economist Joseph Stiglitz said New Zealand was “working … to build the kind of economy that should mark the post-pandemic world”. The finance minister, Grant Robertson, acknowledged the opportunity to showcase a new approach in a bold speech in May in which he said: “There are few times in life when the clock is reset. Now is the time we should address … long-term issues. It’s not one we should squander.” The bumper Toby Morris & Siouxsie Wiles Covid-19 box set. All the illustrations and animations in one place. 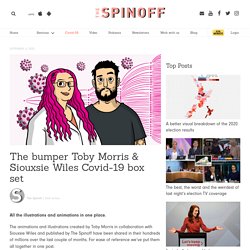 The animations and illustrations created by Toby Morris in collaboration with Siouxsie Wiles and published by The Spinoff have been shared in their hundreds of millions over the last couple of months. For ease of reference we’ve put them all together in one post. You can also read Toby’s extraordinary Side Eye comics, Essential and Viruses vs Everyone. MNZ A3 Futures Thinking summary (MASTER) -19: New Zealand cases mapped and charted, August 12. One bright spot amid the grimness of the Covid resurgence: the return of our series of charts, graphics and data visualisations of the pandemic by Chris McDowall. Over one hundred days, Covid-19 slowly slipped from my attention. I was aware of new cases reaching Aotearoa’s border, managed isolation breaches, relapses in Australia and growing concern that few people were using contact tracing apps, but it felt like we had the virus under control.

Shortly after 9pm last night, four positive tests of unknown origin turned my complacency upside-down. Wishing for a thing does not make it so. Last night prime minister Jacinda Ardern and deputy general of health Ashley Bloomfield announced that four people in one family in South Auckland had tested positive for Covid-19, with no known connection to overseas travel or mandatory isolation facilities. JHU Covid Update - August 10, 2020. Supply Chain Resilience Report Final. How Does COVID-19 Affect Trust in Government? How has the COVID-19 pandemic affected people’s trust in government and their leaders? In one country, according to a new study, decisive action increased people’s sense of unity, patriotism, and confidence in their government. Researchers based at the University of Auckland had been gathering information for 11 years on the social, psychological, and physical health of 60,000 New Zealanders as part of a study called “The New Zealand Attitudes and Values Study (NZAVS).”

When the viral outbreak occurred, they had a ready way to compare pre- and post-lockdown social attitudes. Jacinda Ardern's Leadership Against the Coronavirus. Ardern’s style would be interesting—a world leader in comfy clothes just casually chatting with millions of people! —and nothing more, if it wasn’t for the fact that her approach has been paired with policies that have produced real, world-leading results. Since March, New Zealand has been unique in staking out a national goal of not just flattening the curve of coronavirus cases, as most other countries have aimed to do, but eliminating the virus altogether. And it is on track to do it. COVID-19 testing is widespread. The health system has not been overloaded. How New Zealand's media endangered public health. New Zealand's health minister, David Clark, has been forced to resign and the nation's hyperactive media have claimed their latest scalp.

In the middle of a pandemic, no less. Unseemly as the media's months-long hit on Clark was - a classic example of trial by media - it was consistent with the borderline misconduct that has defined much of the reporting throughout the COVID-19 crisis. While the response to the pandemic threat from the national capital, Wellington, can be held aloft, for now, as a rare success story in a world of disarray, the machinations of much of the nation's media leaves much to be desired.

Taken over time, New Zealand's reporters have appeared focused on managing perceptions, berating and cajoling a fearful public on numerous fronts. A case can be made that the nation's media, laundering many of the opposition's attack lines and big business talking points, have repeatedly endangered public health. Greens' Poverty Plan Welcome and Essential. Comment Labour, shackled by NZ First, has been too conservative on welfare reform.

Rod Oram says we should thank the Green Party for its bold proposals to address income support and tax. You might be one of the 1.6 million Kiwis who received a weekly wage subsidy during lockdown. Every Degree of Openness at Border Adds Risk. New Zealand's uncertain future in a world coming apart at the seams. Unprecedented – but our kaupapa remains unchanged. Small States and the New Security Environment.