Twitter. Ólafur Ragnar Grímsson sur Twitter : "Despite disagreements on many international issues and conflicts #Russia, #USA and #China joined other states in making this historic pathbreaking treaty. Shows the #Arctic as a model for constructive cooperation. Is. #Map shows #Greenland without any ice. There would be a big lake emerging under such a scenario. Source. Good short read by @GPFutures "The Myth of Russia’s Arctic Rule. Royal Geographical Society - Teaching and learning in geography. Living Atlas of the World. Esri sur Twitter : "We love these #maps by @WoodsHoleResCtr from the forthcoming Esri Map Book! They depict #Arctic Ocean ship traffic over the last decade. This work was done in collaboration with the @FletcherSchool of @TuftsUniversity, and the maps ren. Theconversation. Covering the who, when, and where of #Arctic shipping. Courtesy of @PanArctic #MapMonday… This map seems timely: The North Pole. The sun just set in Utqiaġvik (Barrow), AK. It will rise again in 65 days. There were 4,586 hours of daylight in 2017. For comparison, there… 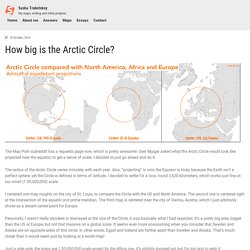 User Mjager asked what the Arctic Circle would look like projected near the equator, to get a sense of scale. I decided to just go ahead and do it. Why the North Pole matters: An important history of challenges and global fascination. The North Pole is world news again. 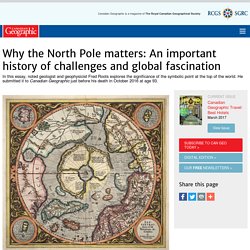 There was a flurry of publicity in 2007 when a Russian submarine placed a metal flag on the seabed at latitude 90 degrees north. No claim was made, and the event had no geographical significance or political impact, but it demonstrated Russian technology and capability in the Arctic Ocean. It wasn’t until December 2014 that Denmark claimed the North Pole and surrounding area under the rules of the United Nations Convention on the Law of the Sea (to which all northern nations are signatories), with Russia following suit in August 2015 and Canada later announcing plans to submit its own Arctic continental shelf claim, including the pole, by 2018. This raises historical, political and scientific questions about the North Pole itself. What is it, where exactly is it, and why is it such an object of interest? Displaying a flag at the North Pole has been a well-known international game for about a century.

Longyearbyen – Longyearbyen, Norway. On the Svalbard Islands of northern Norway there lies the town of Longyearbyen, the northernmost town in the world with a significant population. 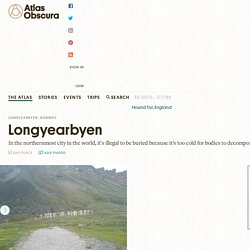 (There are a few research bases further north.) The former coal mining town is now the cultural and commercial center of the Svalbard Islands, featuring the northernmost ATM, church, museum, post office, radio station, airport, and university in the world. Due to the town’s precarious latitude—at 78 degrees North—there are a few strange practices that all people living in Longyearbyen must abide by.

The most bizarre may be that it is illegal to be buried here. The permafrost and sub-zero temperatures in Longyearbyen make it so that any dead bodies lying six feet under are perfectly preserved, as if mummified. ”Arctic” and “Antarctic” mean “beary” and “so not beary”, which is totally accurate but purely by coincidence. Exploring the Arctic. Scientists to repeat 19th-century ship's crossing of polar ice cap. In 1893 the Norwegian explorer Fridtjof Nansen embarked on a mission of extraordinary boldness and ingenuity. 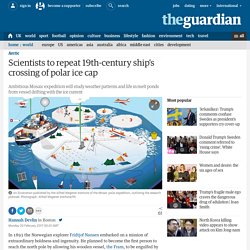 He planned to become the first person to reach the north pole by allowing his wooden vessel, the Fram, to be engulfed by sea ice and pulled across the polar cap on an ice current. Ice-locked ship to drift over North Pole. It is being billed as the biggest single Arctic research expedition ever planned. 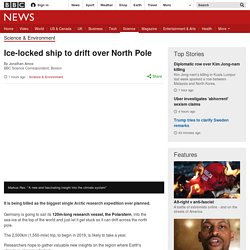 Germany is going to sail its 120m-long research vessel, the Polarstern, into the sea-ice at the top of the world and just let it get stuck so it can drift across the north pole. The 2,500km (1,550-mile) trip, to begin in 2019, is likely to take a year. Researchers hope to gather valuable new insights on the region where Earth's climate is changing fastest. Daylight continues to advance poleward. Spring is coming! (#MODIS, Terra, Arctic nations square up as clamour for resources grows. Global commons: Who's responsible for the Arctic? In August 2016 the 13-deck, 1,000-passenger Crystal Serenity set sail from Alaska to become the first cruise liner to attempt the Arctic’s fabled “north-west passage” that runs across the top of North America from the Pacific to the Atlantic. 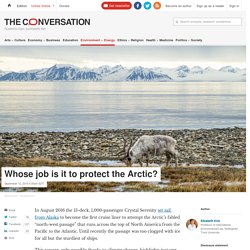 Until recently the passage was too clogged with ice for all but the sturdiest of ships. This voyage, only possible thanks to climate change, highlights just one impact of melting Arctic sea ice. As the ice melts further new opportunities will arise to fish, to drill for oil and gas, or to sail through the once-frozen ocean. Inevitably, this activity will create competition with traditional Arctic communities, and risks severe damage to the environment.

This is a vast, fragile region that plays a huge role in everything from climate cycles to marine food webs and reflecting sunlight back into space. The new cold war: drilling for oil and gas in the Arctic. A long and boisterous queue snakes down the road from a blue wooden clapboard home in the strong spring sunshine. 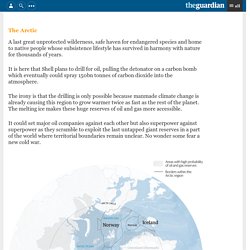 The line of blue jeans and coloured anoraks is mainly made up of middle aged or young couples, their children playing in the snow in front of the house. When the older members of the community arrive later on ­often propped up by relatives and walking frames­ they are immediately ushered to the front of the long line. Suddenly the door opens and a smiling host greets the carnival like crowd. “Hey, hey hey,” he cries. “Hey, hey, hey,” they shout back as they begin to move through a side entrance from where a sweet but distinctive smell emanates.