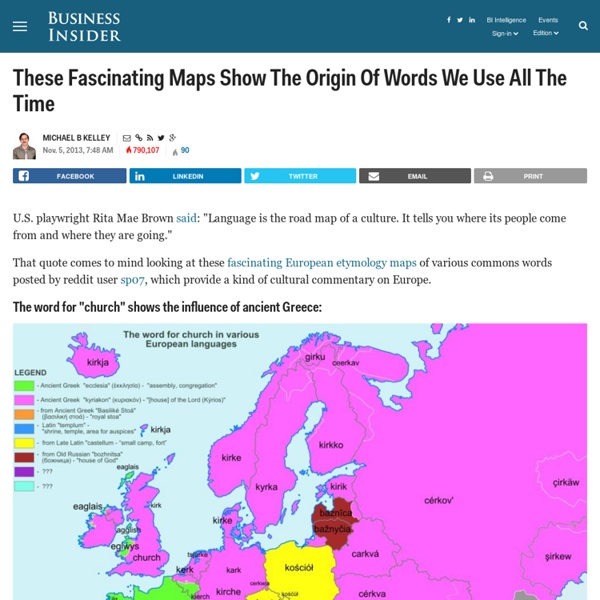 U.S. playwright Rita Mae Brown said: "Language is the road map of a culture. It tells you where its people come from and where they are going." That quote comes to mind looking at these fascinating European etymology maps of various commons words posted by reddit user sp07, which provide a kind of cultural commentary on Europe. The word for "church" shows the influence of ancient Greece: imgur/u/Bezbojnicul "Bear" appears to be influenced by Russia, where largest brown bear population in Europe can be found. Another reddit user noted that "pi" is a prefix for "beer" in several European countries while the "pi" in the Mandarin Chinese word for beer, 啤酒 pi jiu, is a loan word from Europe. "Apple" has a lot of diversity: Notice how the word in Finland and Estonia may come from a Indo-Iranian origin. "Orange" is an interesting one. "Garoful," the ancient Greek word for "rose," only remains in northeastern Italy. imgur/u/Bezbojnicul Related:  Word Formation, A Pearl of Resources • Languages

Etymologically Speaking... From the old Arabic word "hashshshin," which meant, "someone who is addicted to hash," that is, marijuana. Originally refered to a group of warriors who would smoke up before battle. Aaron White adds: You may want to explore the fact that the hashshshins were somewhat of a voodoo-ized grand conspiracy scapegoat cult (the very fact of their existence is impossible to confirm). They supposedly were a secret society (a la the FreeMasons) which was influential in every middle eastern court from Persia to Bangladesh. They were supposedly a brotherhood of assasins, devoted to their caballa and its secrecy, protected by an unlimited number of fanatical followers and unlimited material wealth. Assassination was their favorite method of instituting their power (see the Zoroastrian lore of the eunich priest Arachmenes and his assistance to Darius and Xerxes in their rise to/fall from power). R.

huffingtonpost Getting English words, word lists, word knowledge, vocabulary words, and indexes of science and technology terms with vocabulary quizzes or word tests for learning English vocabulary Conjugaison de tous les verbes avec Le Conjugueur From Valais-German to Walser-German — Willkommen auf WalserAlps From Valais-German to Walser-German The Alemannic-speaking part The dialects of Valais and the Walser connect the Valais with its colonies that emerged in the 13th and 14th century. Linguistically, they belong to the high-Alemannic language group- belonging to the highest of the southern alpine borders of the Alemannic (Zinsli).The characteristic sounds, the ancient forms and terms of the Walser are mainly to be found in the German-speaking Valais. The reason for this division lies in the Alemannic colonisation of Upper Valais in the 7th century: the upper part of it was populated over the Grimsel whereas the lower part was populated over Sanetsch, Rawil and Gemmi.

The Tower of Babel << Home Page The Tower of Babel An International Etymological Database Project Participants (so far): The Russian State University of the Humanities (Center of Comparative Linguistics) The Moscow Jewish University The Russian Academy of Sciences (Dept. of History and Philology) The Santa Fe Institute (New Mexico, USA) The City University of Hong Kong The Leiden University The main goal of the project is to join efforts in the research of long range connections between established linguistic families of the world. Every person or organization interested in this noble task is invited to join.

Wordorigins.org Building an Archive of ALL Documented Human Languages. - The Rosetta Project Root Words Teacher Tips I have always used root words as a quick class opener. I have even used them when my school sprang for the Sadlier-Oxford books as the two work well together. Forty years ago, way back at Millwood, my first school, the teachers developed a list of root words as part of a comprehensive 7-12 vocabulary program. We divided this extensive list of roots between grade levels and expected kids to be taught and to master about 50 at every grade level. Of course, that means each kid had at least 300 major roots in head by graduation. For my part, now that I am no longer part of a compre-hensive system, I went with a core 120 roots broken into 10-root sets in My Root Sets. I write two or three on the board every day and we brainstorm derivatives. I am very proud of the Root Word Tests since I use a big list of roots that I call My Root Dictionary. The students tell me that knowing roots consciously is very helpful on the ACT and SAT. Useful Websites Teacher Resources Check out Neo below: