Hrama. City in the Sky The concept. 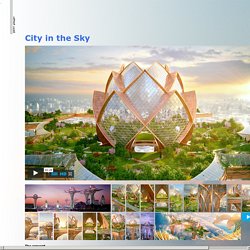 Adam Greenfield en Smart City Expo. Urban Word Wars and the Nouveau-Eco-City Brand. Within the past year or so, it seemed as though every corner of the Internet suddenly burst forth with a hyper gush of articles about the implications of the global shift from a majority rural to urban-dwelling population. 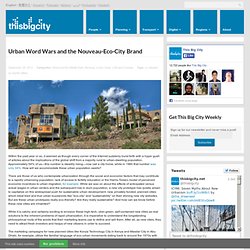 Approximately 54% of us—this number is steadily rising—now call a city home, while in 1960 that number was only 34%. How will we accommodate these urban population swells? Vertical City : A Solution for Sustainable Living by Raymond King. Share this project Done Share. 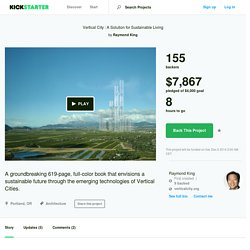 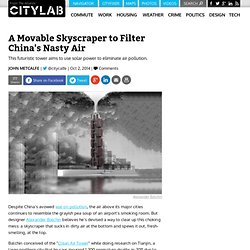 Despite China's avowed war on pollution, the air above its major cities continues to resemble the grayish pea soup of an airport's smoking room. But designer Alexander Balchin believes he's devised a way to clear up this choking mess: a skyscraper that sucks in dirty air at the bottom and spews it out, fresh-smelling, at the top. Balchin conceived of the "Clean Air Tower" while doing research on Tianjin, a large northern city that he says incurred 1,200 premature deaths in 2011 due to bad air. The odd-looking building would theoretically harness the sun's power to run foul air through filters, providing a square mile of breathable space in the city. City of the future sinks into the ocean. Each Ocean Spiral will be home to about 5,000 people, according to Shimizu Corp., with each structure also incorporating business and office facilities, hotel and entertainment facilities. 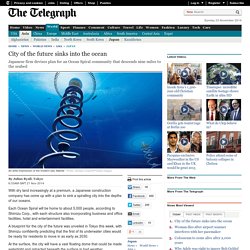 Beneath the dome, the spiral structure would descend as much as 9 miles to the seabed, where an "earth factory" would produce methane from carbon dioxide by using micro-organisms, the company said. The seabed could also be mined for rare earth minerals and metals. Future of Urban Water. 3zVK94w.jpg (JPEG Image, 1982 × 1423 pixels) - Scaled (51%) Illegal Skyway: Chinese Homeowner Bridges 2 Highrise Condos. Who Still Hangs Out at the Mall? Malls have been symbols of a certain kind of surreal suburban America for so long that they seem like permanent features of the landscape. 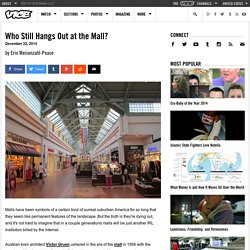 But the truth is they're dying out, and it's not hard to imagine that in a couple generations malls will be just another IRL institution killed by the internet. Austrian-born architect Victor Gruen ushered in the era of the mall in 1956 with the opening of the Southdale Center in Edina, Minnesota. Photos from the new coffee table book Shanghai Blink. Shanghai Blink is a beautiful new photography coffee table book by Inès Breton and Vincent Prudhomme. 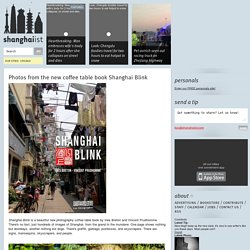 There's no text, just hundreds of images of Shanghai, from the grand to the mundane. One page shows nothing but doorways, another nothing but dogs. There's graffiti, garbage, postboxes, and skyscrapers. 8 Pictures That Capture How Cities Changed in 2014. Remember when we asked you to send us photos of the changes you saw happening in your city? 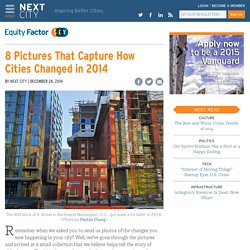 Well, we’ve gone through the pictures and arrived at a small collection that we believe helps tell the story of cities in 2014. The big takeaway is growth: Our readers saw signs of growth everywhere and when they weren’t seeing growth, they were observing hauntingly beautiful architecture in need of that energy. Experimental Prototype Community of Tomorrow (concept) An artist's conception of what EPCOT would look like as originally planned. 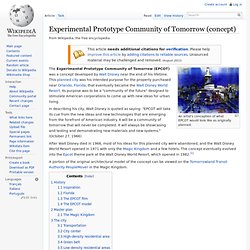 The Experimental Prototype Community of Tomorrow (EPCOT) was a concept developed by Walt Disney near the end of his lifetime. This planned city was his intended purpose for the property purchased near Orlando, Florida, that eventually became the Walt Disney World Resort. Its purpose was to be a "community of the future" designed to stimulate American corporations to come up with new ideas for urban living. In describing his city, Walt Disney is quoted as saying: "EPCOT will take its cue from the new ideas and new technologies that are emerging from the forefront of American industry. Global Development Professionals Network. The everyday commute in Hanoi is a test of endurance; it requires perseverance and concentration, and involves pollution, bizarre noises, and mysterious aromas. 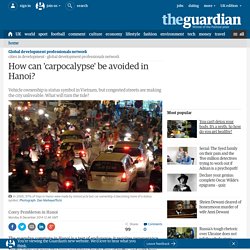 Traffic lights act more like loose guidelines for the flow of traffic, and with busy crowded streets, public buses are the most feared among bicyclists for their accelerator-happy feet. Hanoi is responsible for more than 10% of Vietnam’s economic output and is home to 14% of the population. It’s a crowded city; its nine central districts have an average population density of 20,000 people/km2. Img - Shanghai from above. City-level Indices and Indicator Frameworks. At the 2014 New Cities Summit, June 17-19 in Dallas, Texas, measurement was a major theme.

From tech companies like Ericsson to financial institutions like Citi and non-government organizations (NGOs), it seemed everyone was touting some sort of indicator system or index related to cities. How connected is your city? What issues do youth care most about in a city? The Human Ecosystems project. Should New York City's Next Mayor Appoint a Deputy Mayor of Design? Nicole Ferraro - NYC Releases New Street Design Manual. Architecture Building Information Modeling (BIM) Building Management Systems Construction and Building Materials Facilities Management Government Buildings Lighting Planning School Buildings Smart Meters. Welcome to the dead zone: Our planet’s greatest cities are facing a major pollution crisis. Last week, Paris and Beijing had one of those feuds that city-watchers love so much. (Such head-to-head battles, like great inter-urban sporting events, fuel the illusion that cities are singular, indivisible, cultural entities.) In this case, it was a race to the bottom: Observers noticed, during the five-day air quality crisis in Paris last week, that there was more particulate matter in the Parisian atmosphere than in Beijing.

This was true, for a moment, but the comparison soon backfired on certain gleeful Chinese media outlets. Ambient and household air pollution and health. Stereopublic.

Honduras sets stage for three privately run cities. Dezeen News: The government of Honduras has given the go-ahead for three privately run cities with "their own police, laws, government and tax systems", according to ABC News. Work will start on infrastructure for the first "Model City", near Puerto Castilla on the Caribbean coast, with US investment group MGK providing $15 million in initial funding. Subsequent cities could be built in the Sula Valley and the south of the country. Also involved is Future Cities Development Inc, which is "seeking to build a chartered city within an uninhabited special development region in Honduras", according to its website. It adds: "We believe that by bringing the Silicon Valley spirit of innovation to Honduras, we can build a unique city that enables the Honduran people to lift themselves out of poverty and play a greater role in the global economy.

" Top, above and below: images from the Future Cities Development Inc website. What Would LA Look Like If The Best Design Proposals Were Accepted? What would L.A. look like if some of the design proposals submitted over the last 100 years had been accepted? The exhibition ‘Never Built: Los Angeles‘ looks at these proposals and shows how design could have worked to solve transportation and housing issues that currently plague the city, as well as providing more green space.

USAPP – City main street networks show a drastic shift away from historic patterns of human-scale design. Have you ever wondered why some places seem built for automobiles as opposed to humans? In a recent study, J. Bristol Legible City. 30 Hudson Yards. View Dynamic Glass by View Inc. From Watch Dogs to GTA V, why 'video games are going to reshape our cities' Welcome to Wecyclers. Euphoria by KuldarLeement on deviantART. Gerardo ars highlights the relationship of a family in three house. Jun 10, 2014. Homeless Haven – Street Furniture by Ke Wan, Xiaohua Ma, Xing Guo & Qingxiang Zhu. Where Bicycles Are Stolen in San Francisco. An About Page (For Now) Bringing the jungle to the city: A techno-shamanic quest to reconnect urban life to ecological reality : June 2014.