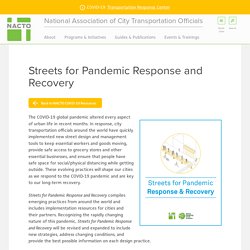 In response, city transportation officials around the world have quickly implemented new street design and management tools to keep essential workers and goods moving, provide safe access to grocery stores and other essential businesses, and ensure that people have safe space for social/physical distancing while getting outside.

These evolving practices will shape our cities as we respond to the COVID-19 pandemic and are key to our long-term recovery. Streets for Pandemic Response and Recovery compiles emerging practices from around the world and includes implementation resources for cities and their partners. Recognizing the rapidly changing nature of this pandemic, Streets for Pandemic Response and Recovery will be revised and expanded to include new strategies, address changing conditions, and provide the best possible information on each design practice. Press Release >Download Full Resource (PDF) >

Www.forbes. Should she get reelected as Mayor of Paris, Anne Hidalgo plans to turn the French capital into a myriad of neighborhoods where “you can find everything you need within 15 minutes from home.” 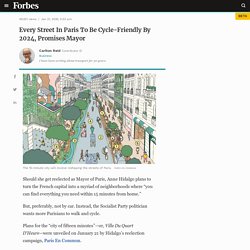 But, preferably, not by car. Instead, the Socialist Party politician wants more Parisians to walk and cycle. How London got rid of private cars – and grew more congested than ever. High Holborn on a bleak winter morning is a portrait of traffic hell. 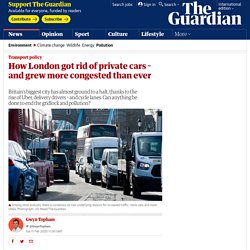 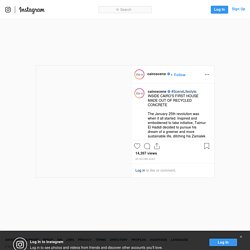 Inspired and emboldened to take initiative, Taimur El Hadidi decided to pursue his dream of a greener and more sustainable life, ditching his Zamalek apartment and purchasing a plot of land in an area known as the 'Green Revolution', located on Cairo's outskirts in Sheikh Zayed. Six years is how long it took him to bring his vision of a house made entirely out of recycled concrete to life, a pursuit in which no trees were cut down and no living creature displaced.

Examining Street Life Before the Automobile. 101 small ways you can improve your city. On Your Street | In Your Neighborhood | At Your Parks | Along Your Route | With Your Neighbors | In Your Community We've scoured cities all around the world for small ideas with huge potential, and asked some of our favorite urban thinkers for tiny ways to make outsized transformations. 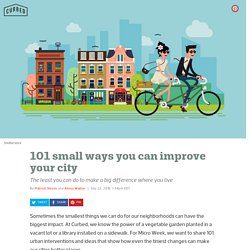 This tube map shows how much more rent you'll pay for an easier commute. Lessons Learned from the First Generation of Net-Zero Communities – THE DIRT. The first generation of net-zero communities, which were designed to add no carbon to the atmosphere, are entering their second decade. 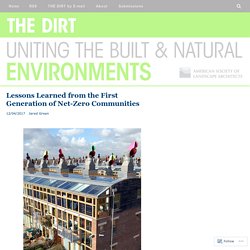 Beddington Zero Energy Development (BedZED) in London is about 15 years old now; and the first phase of Dockside Green in Victoria, Canada, is now 10 years old. In a session at the 2017 Greenbuild in Boston, Steven Dulmage with Urban Equation and Justin Downey at RNWL outlined lessons learned from these early sustainable communities and how they informed second-generation developments, such as Zibi in Ottawa, Canada, and Hazelwood Green in Pittsburgh, Pennsylvania. According to Dulmage, BedZED, which has 82 homes, “didn’t hit net-zero carbon projections.” While the project successfully reduced emissions from transportation — as more residents walk, bike, or take mass transit — the biomass plant built onsite didn’t work out. How to Make an Attractive City. Why cities are full of uncomfortable benches. The happy city experiment. 4 ways to make a city more walkable. Why glass towers are bad for city life. 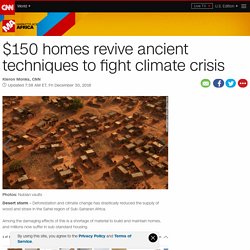 This is both prohibitively expensive and unsuited to the climate, entrenching poverty and making homes that boil in summer and freeze in winter. One creative enterprise is reaching back over 3,000 years for a solution, borrowing an architectural technique from the ancient Nubian civilization of latter-day Sudan to offer superior homes at minimal cost. The NGO La Voute Nubienne (Nubian Vault) is training an army of masons to build homes from the earth, and the ancient innovation is having a profound impact. For all seasons The Nubian technique uses bricks and mortar produced from local earth, laid over a foundation of rocks. La Voute Nubienne is working in five West African countries; Burkina Faso, Mali, Senegal, Benin and Ghana, where around 20,000 people now live in the Nubian homes. A roof, a skill, a market Macro impact. فكرة مواطن لتحويل منطقة سور مجرى العيون إلى شانزليزيه مصر. Vertical Garden Towers the Future of Dense Urban Living?

Passive House designers are the Fremen of the architectural world. 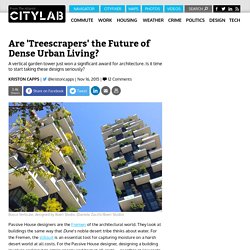 They look at buildings the same way that Dune’s noble desert tribe thinks about water. For the Fremen, the stillsuit is an essential tool for capturing moisture on a harsh desert world at all costs. For the Passive House designer, designing a building involves sealing it to retain energy and heat at all costs—or rather at low costs. So when I asked a Passive House designer for his thoughts about a relatively new and unconventional type of building design, he replied with the kind of concern a water-conscious Fremen might feel looking at a leaky faucet on Arrakis. 220 Mini Metro Maps From Around The World. Building Incredible Houses Out of Abandoned Shipping Containers. Urban BEFORE. Below, a selection of some of the best public space transformations from our gallery! 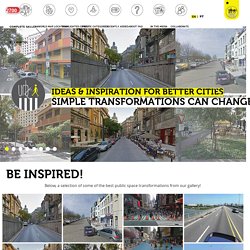 0064 HU Budapest Ferenciek tere 0068 BE Antwerp Amsterdamstraat 0164 US New York. Learning City Case Studies for Urban community. Swap-shop Concept in Sweden. Curbed - Would you live in a Quonset hut? Egypt 712 - Vision & Strategy - الرؤية المتكاملة by REMAL Foundation. Architects Have Forgotten What a Good Human Scale Is. The 19 greatest cities in history - INSIDER. Science Is Proving Why Urban Design Matters More Than Ever. It’s easy to make our cities attractive. 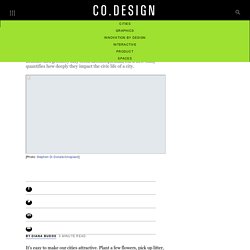 Plant a few flowers, pick up litter, put up a sculpture or two. But cosmetic improvements don’t necessarily translate to meaningful change to public spaces. There’s very little research on how urban design affects issues like equitable access, civic responsibility, civic pride, and informed voting–four of the biggest challenges facing cities today, according to the Center for Active Design (CfAD), a nonprofit that explores the intersection of design and public health. To shed more light on the role of design in civic life, CfAD surveyed over 5,000 people from 26 different communities–and different socioeconomic groups and races–across the United States to quantify how urban design makes them feel. 4 Things to Consider When Designing Streets For People. 4 Important Things to Consider When Designing Streets For People, Not Just Cars Go to any medieval European city and you will see what streets looked like before the advent of the car: lovely, small narrow lanes, intimate, and undisputedly human-scale.

We have very few cities in the US where you can find streets like this. For the most part what you see is streets that have been designed with the car in mind—at a large scale for a fast speed. In my native San Francisco, we are making the streets safer for walking and biking by widening sidewalks, turning car lanes into bike lanes, and slowing down the cars. We are working with the streets we have; a typical San Francisco street is anywhere from 60 to 80 feet (18 to 24 meters) wide, as compared with a medieval, pre-car street which is more like 10 to 20 feet (3 to 6 meters) wide.