Google's Sergey Brin bankrolled world's first synthetic beef hamburger. Effects of global warming. Describes the effects created by global warming A 2014 summary of climate change impacts Seven of these indicators would be expected to increase in a warming world and observations show that they are, in fact, increasing. 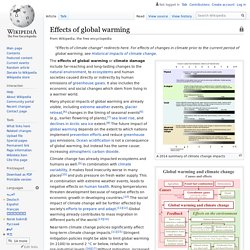 Three would be expected to decrease and they are, in fact, decreasing.[5] The effects of global warming or climate damage include far-reaching and long-lasting changes to the natural environment, to ecosystems and human societies caused directly or indirectly by human emissions of greenhouse gases. It also includes the economic and social changes which stem from living in a warmer world. Climate change has already impacted ecosystems and humans as well.[9] In combination with climate variability, it makes food insecurity worse in many places[10] and puts pressure on fresh water supply. Observed and future warming Global mean surface temperature change since 1880, relative to the 1951–1980 mean. Projected global warming in 2100 for a range of emission scenarios. Temperatures. Sustainable House Design. The best options for flying to faraway stars - Technology & science - Space. 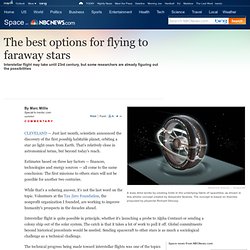 That's relatively close in astronomical terms, but beyond today's reach. Estimates based on three key factors — finances, technologies and energy sources — all come to the same conclusion: The first missions to others stars will not be possible for another two centuries. Bussard ramjet. Sci-Fi in Real Life: Solar Sails Being Developed By NASA.

NASA may have put an end to the shuttle program, but they continue to pursue cutting edge technology. 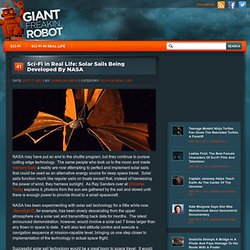 The same people who took us to the moon and made memory foam a reality are now attempting to perfect and implement solar sails that could be used as an alternative energy source for deep space travel. Solar sails function much like regular sails on boats except that, instead of harnessing the power of wind, they harness sunlight. As Ray Sanders over at Universe Today explains it, photons from the sun are gathered by the sail and stored until there is enough power to provide thrust to a small spacecraft.

NASA has been experimenting with solar sail technology for a little while now. Solar sail. This article is about spacecraft propulsion by radiation pressure of light from the Sun. 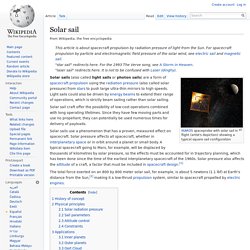 For spacecraft propulsion by particle and electromagnetic field pressure of the solar wind, see electric sail and magnetic sail. IKAROS spaceprobe with solar sail in flight (artist's depiction) showing a typical square sail configuration. How Antimatter Spacecraft Will Work" Future Rainfall Predictions Climate Change. Humanity is at a crossroads The world of 2050 is a world of contrasts and paradoxes. 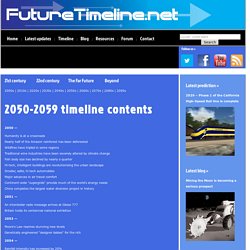 On the one hand, science and technology have continued to advance in response to emerging crises, challenges and opportunities. This has created radical transformations in genetics, nanotechnology, biotechnology and related fields. Mission to Mars. Mars has a reddish-orange color caused by the iron-rich minerals in its soil. 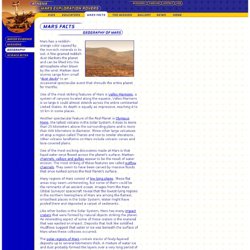 A fine-grained reddish dust blankets the planet and can be lifted into the atmosphere when blown by the wind. Martian dust storms range from small " dust devils " to an occasional spectacular event that shrouds the entire planet for months. NASA Curiosity Rover To Drill First Martian Sandstone 'Windjana' : Science. By Rebekah Marcarelli r.marcarelli@hngn.com | Apr 27, 2014 02:48 PM EDT "NASA's Curiosity Mars rover has driven within robotic-arm's reach of the sandstone slab at the center of this April 23 view from the rover's Mast Camera. 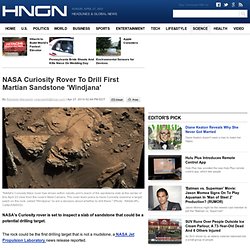 The rover team plans to have Curiosity examine a target patch on the rock, called "Windjana," to aid a decision about whether to drill there. " (Photo : NASA/JPL-Caltech/MSSS) NASA's Curiosity rover is set to inspect a slab of sandstone that could be a potential drilling target. Earth to Mars: An Interactive Timeline. «Mars-500» project. 4th of November 2011 is the finish of the experiment on simulation of a manned flight to Mars (“Mars-500” project). 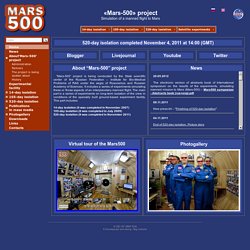 After the exit out of the experimental facility six crewmembers will be in observation regime (without a possibility to communicate with media), during which they will pass a thorough medical examination. Completion of the experiment and the crew exit out of the facility will be transmitted on-line through the satellite. In the case of any questions, related to the technical issues and parametres of providing a signal (the signal itself is free) please, contact to senior Planning Manager of the RT channel Murat Gavasheli (tel.:+79152183354). Press-conference with the participation of crewmembers and the project management will be held on 8th of October 2011, at 12.00, in the conference-hall of Russian news and information agency “RIA-Novosti” (Moscow), and we invite media to this event.

Here are phone numbers for media accreditation in “RIA-Novosti”: +7(495)637-5019. The Asteroid that Flattened Mars. Tomorrow's cities: Do you want to live in a smart city? How do you fancy living in a city with which you can interact? 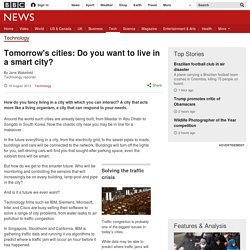 A city that acts more like a living organism, a city that can respond to your needs. Around the world such cities are already being built, from Masdar in Abu Dhabi to Songdo in South Korea. Now the chaotic city near you may be in line for a makeover. In the future everything in a city, from the electricity grid, to the sewer pipes to roads, buildings and cars will be connected to the network. MIT Media Lab CityHome: What if 200 ft2 could be 3x larger?

The Rise of Automated Cars Will Kill Thousands of Jobs Beyond Driving. 5 Ideas That Could Change the Future of Trains. Could These Futuristic Buildings Really Change Human Behavior? Some of these buildings looks like something Godzilla stepped on or chewed and spat. 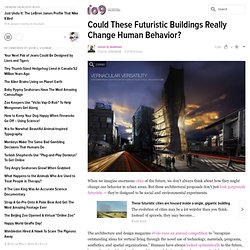 But that sea garbage collector is beatiful and an amazing idea. Until it swallows an unsuspecting sea lion. I believe they thought about that. At least I hope they did. What about plankton? I don't think they gave it much thought at all, frankly. Basically, if so, the idea is great but the execution is shoddy. Plankton always get away through the cracks, the escape artists.

Related:  Future Work   -  My ideal city   -  Science   -  Virtual Reality Experiences   -  Tomorrow's cities: Do you want to live in a smart city?   -  The Rise of Automated Cars Will Kill Thousands of Jobs Beyond Driving   -  Education   -  Enterprise