'silica plastic block' is a sustainable brick made from recycled sand + plastic waste. Here's how Finland solved its homelessness problem. In the last year in the UK, the number of people sleeping rough rose by 7%. 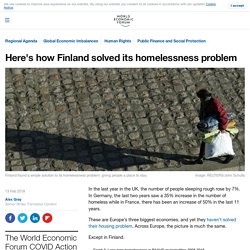 In Germany, the last two years saw a 35% increase in the number of homeless while in France, there has been an increase of 50% in the last 11 years. These are Europe’s three biggest economies, and yet they haven’t solved their housing problem. Across Europe, the picture is much the same. There, the number of homeless is steadily decreasing. So what have they been doing differently? The Finns have turned the traditional approach to homelessness on its head. There can be a number of reasons as to why someone ends up homeless, including sudden job loss or family breakdown, severe substance abuse or mental health problems. 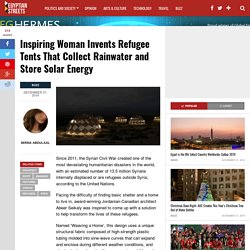 Facing the difficulty of finding basic shelter and a home to live in, award-winning Jordanian-Canadian architect Abeer Seikaly was inspired to come up with a solution to help transform the lives of these refugees. Named ‘Weaving a Home’, this design uses a unique structural fabric composed of high-strength plastic tubing molded into sine-wave curves that can expand and enclose during different weather conditions, and also be broken down to allow an ease in mobility and transport. Through its innovative engineering design, the tent can also absorb solar energy and transform it into electric energy, which is stored in special batteries. Abhijit Banerjee and Esther Duflo: The Nobel couple fighting poverty. Image copyright AFP For the past two decades, the world's most-feted economist couple has tried to understand the lives of the poor, in "all their complexity and richness". 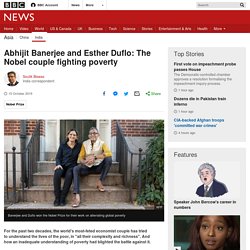 And how an inadequate understanding of poverty had blighted the battle against it. On Monday, Abhijit Banerjee, 58, and Esther Duflo, 46, won the Nobel Prize in Economics, along with economist Michael Kremer, for their "experimental approach to alleviating global poverty". More than 700 million people live in extreme poverty, according to World Bank. Both Mr Banerjee and Ms Duflo are professors at the Massachusetts Institute of Technology (MIT). The Indian-born Mr Banerjee and Paris-born Ms Duflo grew up in completely different worlds. Esther Duflo was six when she read in a comic book on Mother Teresa that described Kolkata (formerly Calcutta) as an overcrowded city where each resident lived on a 10 sq ft space.

Irish Teenager Invents Magnetic Liquid Trap That Can Remove 90% of Microplastics From Water. Teenager wins Google Science award for genius invention that could cheaply remove most microplastics from the ocean Because microplastics are so small — some as tiny as grains of sand — scientists have had a hard time figuring out to remove them from the soil and the sea. 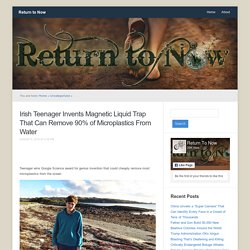 Now, an Irish teenager has come up with a promising solution for this seemingly impossible task — a magnetic liquid that attracts microplastics to itself. 18-year-old Fionn Ferreira was kayaking one day when he spotted a rock covered in oil from a recent spill. Clinging to the oil were a bunch of tiny pieces of plastic. “It got me thinking,” Ferreira told Business Insider. Plastic and oil are nonpolar, making them likely to stick together in nature. - Connexion ou inscription. European Inventor Award Popular Prize 2019: EPO Stage. Connexion ou inscription. Facebook - Connexion ou inscription. TheCHIVE - Dog cries during The Lion King scene. 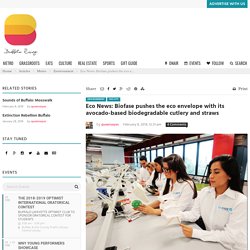 The reason that this is so significant is that avocado seeds typically equate to huge industrial waste. Connexion ou inscription. Japan pensioners volunteer to tackle nuclear crisis. Media playback is unsupported on your device A group of more than 200 Japanese pensioners are volunteering to tackle the nuclear crisis at the Fukushima power station. 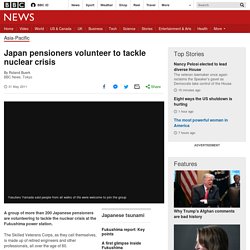 The Skilled Veterans Corps, as they call themselves, is made up of retired engineers and other professionals, all over the age of 60. They say they should be facing the dangers of radiation, not the young. This Dad is Melting Down Thousands of Crayons to Help Children in Need. Connexion ou inscription. BuzzFeed - For Anyone Who Needs Their Faith In Humanity Restored.

We Need This - Sweden is putting people in tiny glass... Will Seabins save our oceans? The Seabin Project. We Need This - These edible water pods could replace the... Uproxx. Haruna Cofer Uproxx knows that science, technology, engineering, and math (STEM) disciplines are driving the future of this planet forward. 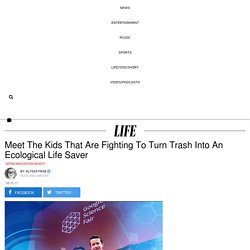 Every day, we see new ideas, fresh innovations, and bold trailblazers in these fields. Follow us this month as we highlight how STEM is shaping the culture of NOW. Water-Absorbing Concrete.