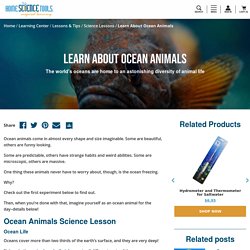 Some are beautiful, others are funny looking. Some are predictable, others have strange habits and weird abilities. Some are microscopic, others are massive. One thing these animals never have to worry about, though, is the ocean freezing. Why? Check out the first experiment below to find out. Then, when you’re done with that, imagine yourself as an ocean animal for the day–details below! Ocean Animals Science Lesson Ocean Life Oceans cover more than two thirds of the earth’s surface, and they are very deep! Fish and other animals make their homes in all different parts of the ocean, even on the bottom, or sea floor.

Sustainable Earth: Oceans - National Geographic. More than half the people on Earth live within 120 miles (193 kilometers) of the ocean, but even those who live nowhere near the sea are dependent on the massive saltwater ecosystem that covers nearly three-fourths of our planet. 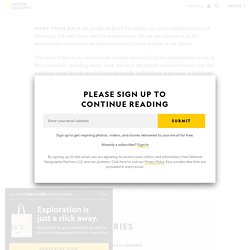 The ocean helps create and regulate weather around the globe and produces many of life's essentials, including water, food, and even the oxygen we breathe every day. But scientists warn that the sea is changing rapidly and that our many uses of its bounty must be managed far more sustainably. "If I were speaking to all the leaders at Rio+20 I'd say this is not [a choice between] the ocean or ourselves," said marine ecologist Enric Sala, a National Geographic explorer-in-residence. "A healthy ocean means healthier humans, more food on our tables, more jobs, and a healthier economy. " The sea's biodiversity is astounding. A Raft of Challenges Other ocean impacts have inland sources. "We know how to fix these problems," Sala said. The Climate Connection. Oceans & Coasts. Oceans. Shark tagged from submarine for first time in history Pacific Ocean Atlantic Ocean Arctic Ocean Deepest Dive Under Antarctica Reveals a Shockingly Vibrant World It’s like the apocalypse, but smaller Out of the Shadows, the Wildcats You've Never Seen Can the Selfie Generation Unplug and Get Into Parks? 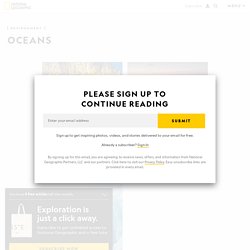 The Next Moon Landing Is Near—Thanks to These Pioneering Engineers Partner Content For the past year, a research team has developed a new strategy to study the near threatened bluntnose sixgill shark in deep waters. Ocean Animal Encyclopedia. Why the Ocean Matters. Will the ocean ever run out of fish? - Ayana Elizabeth Johnson and Jennifer Jacquet. 5 Threats to Sea Turtle Survival - AquaViews. Nearly all species of sea turtles are considered endangered and are facing the risk of becoming completely extinct within a few decades if their treatment doesn’t change. 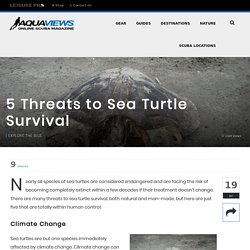 There are many threats to sea turtle survival, both natural and man-made, but here are just five that are totally within human control. Climate Change Sea turtles are but one species immediately affected by climate change. Climate change can dramatically alter natural environments, causing disruption in feeding and breeding cycles. Melting polar ice caps contribute to sea level rise, which can erode or even swallow beaches where sea turtles lay their eggs. Illegal Poaching There are laws which protect sea turtles in almost every country; however, the illegal trade of eggs, meat, and shells are ongoing threats to sea turtle survival.

Overfishing: The most serious threat to our oceans. 30 Ocean Pollution Facts That Will Blow Your Mind. The ocean remains one of the most vast, mysterious and diverse places on our planet.

But as we’ve learned, it’s vulnerable to something as simple as the human touch. Every day our environment is being threatened by ocean pollution and, as you might expect, marine life is suffering at an alarming rate. Click here for our free guide: 6 Steps to Successful Recycling and Waste Reduction The numbers to support this? Flat out scary. Ocean pollution affects more than 817 animal species around the world, a figure that has increased 23% in the last 5 years alone. Causes of Ocean Pollution. 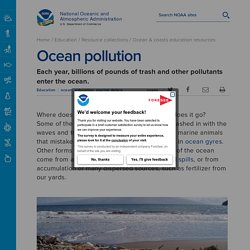 Marine debris injures and kills marine life, interferes with navigation safety, and poses a threat to human health. Our oceans and waterways are polluted with a wide variety of marine debris, ranging from tiny microplastics to derelict fishing gear and abandoned vessels. Today, there is no place on Earth immune to this problem. How Big The Great Pacific Garbage Patch Really Is. 10 Ways You Can Help Save the Oceans. Protecting Sea Turtles. One Month Without Single-Use Plastics. Kids Take Action Against Ocean Plastic. Our Incredible Ocean: Now Is the Time to Protect It. How We Can Keep Plastics Out of Our Ocean.

The Water. Looking after our Planet. 15 Things You Can Do to Help Keep Oceans Clean. Each year, millions of people plan trips to the most beautiful beaches all around the world for relaxing afternoons of sunbathing and swimming in the ocean. 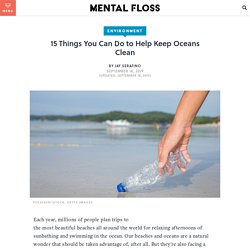 Our beaches and oceans are a natural wonder that should be taken advantage of, after all. But they're also facing a pollution crisis. From untold tons of plastic to carbon emissions and household chemicals getting into our waterways, the dangers facing marine life are mounting. In honor of World Environmental Health Day on September 26, it's important to realize that it's not enough just to enjoy our oceans—we also have to keep them clean and actively protect them.

And here are 15 ways you can help. 1. Placebo365/iStock, Getty Images It's hard to clean up the ocean without knowing why and how it gets polluted in the first place. Learn how your plastic water bottle winds up in the ocean in the first place, or how the oil from your engine can travel through the sewer and into nearby bodies of water. 2.