'The future of housing': California desert to get America's first 3D-printed neighborhood. The desert landscape of California’s Coachella valley will soon be home to the first US neighborhood comprised entirely of 3D-printed houses. 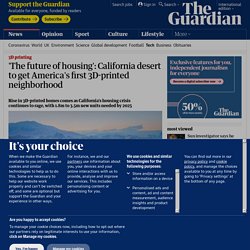 BAMB: The Future of Sustainable Building? BAMB is on a mission. 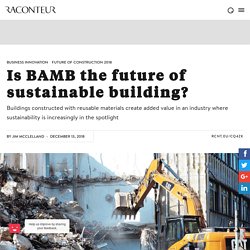 Begun in 2015 within the EU-funded Horizon 2020 programme, Buildings as Material Banks (BAMB) brings together fifteen partners from seven European countries. Its goal is a systemic shift in sustainable building. The long term could see construction companies renting materials to owners As the name implies, BAMB reimagines a building as a dynamic repository of value, where tradable material assets can be deposited, data tracked, transferred and withdrawn. In BAMB, whether an industry goes circular depends on value as worthless materials are waste, valuable materials are reused, recycled, recovered. Moderating material flows, buildings can help slow the resource burn rate to meet the capacity of the planet.

Three major changes supporting the BAMB vision for sustainable building To enable this shift, BAMB is developing and integrating tools, such as materials passports, reversible building design and circular building assessment. Who’d like to live under the sea? Phil Nuytten first decided he wanted to spend his life underwater when he was six years old. 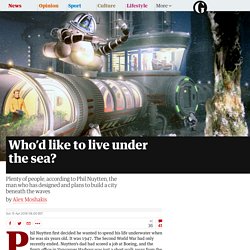 It was 1947. The Second World War had only recently ended. This House Costs Just $20,000—But It’s Nicer Than Yours. In January, after years of building prototypes, the team finished their first pilot project in the real world. Partnering with a commercial developer outside Atlanta, in a tiny community called Serenbe, they built two one-bedroom houses, with materials that cost just $14,000 each. The goal: To figure out how to bring the ultra-low-cost homes, called the 20K Home, to the broader market. Car-Free Neighborhood Redesigns Suburbia. It’s possible that some people might own a car in a new neighborhood designed for Mannheim, Germany. 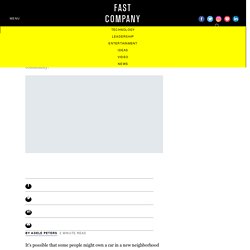 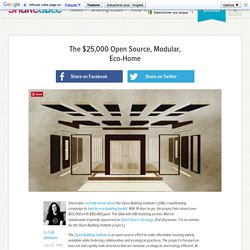 With 14 days to go, the project has raised over $65,000 of its $80,000 goal. This Q&A with OBI founding partner Marcin Jakubowski originally appeared on Open Source Ecology. (Full disclosure: I’m an advisor for the Open Building Institute project.) The Open Building Institute is an open source effort to make affordable housing widely available while fostering collaborative and ecological practices. The project is focused on low cost and rapidly-built structures that are modular, ecological, and energy efficient. I spoke with founding partner Marcin Jakubowski about the importance of open source design to address pressing global issues, why modular building is an exciting alternative to traditional building methods, and how an empowered community of people that draw from, and contribute to, the library can help provide low-cost housing solutions anywhere.

Creating Building Blocks to Tackle Plastic Waste. “It’s all about timing,” says Gregor Gomory, CEO of ByFusion, a startup he believes is about to take advantage of a “perfect storm” brewing as the world wakes up to the enormous problem of plastic waste filling up our oceans. 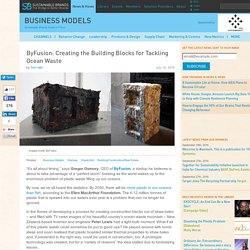 By now, we’ve all heard the statistics: By 2050, there will be more plastic in our oceans than fish, according to the Ellen MacArthur Foundation. The 4-12 million tonnes of plastic that is spewed into our waters ever year is a problem that can no longer be ignored. In the throes of developing a process for creating construction blocks out of straw bales – and filled with TV news images of his beautiful country’s ocean-waste mountain – New Zealand-based inventor and engineer Peter Lewis had a light-bulb moment: What if all of this plastic waste could somehow be put to good use? Autonomous 3D-Printed Home Can be Built in a Day. A Ukrainian firm says it has created a new type of modular house that can be built in a day and is completely self-sustaining for its occupants. 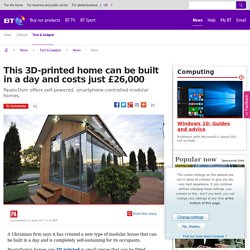 PassivDom’s homes are 3D printed in small pieces that can be fitted together to construct your house using fibreglass, carbon and polyurethane, as well as aluminium frames and tempered glass. The finished building also comes with appliances in place – all of which are internet-enabled and can be entirely controlled from your smartphone, PassivDom says. Once built, the houses also come with their own water management system and solar panels to ensure they can be used completely autonomously and off-the-grid. World's Largest 3D Printer Creates Zero-Cost Homes From Mud. The first home built by WASP is 40-feet tall and cost just $53 to make. 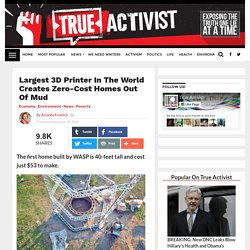 Credit: WASP By 2050, the human population is expected to reach 9.7 million. In effect, securing affordable and eco-friendly housing will become a forefront issue for many citizens. Github for Eco-Housing Builds $25k Homes in Just 5 Days. Hardhat bots take over construction sites. RobotLabNYC’s third installment will be June 13th in New York City with Howard Morgan (FirstRound Capital) and Tom Ryden (MassRobotics); together, we will be “Exploring The Autonomous Future” (RSVP today). 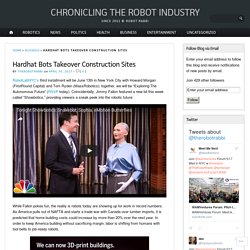 Coincidentally, Jimmy Fallon featured a new bit this week called “Showbotics,” providing viewers a sneak peek into the robotic future: While Fallon pokes fun, the reality is robots today are showing up for work in record numbers. Robot 3D Printers Could Build Homes on Other Planets. 3D Printing to Disrupt Construction. Attendees at this year’s Melbourne International Flower and Garden Show in March are in for a surprise. 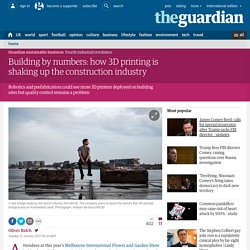 No, not the usual prize petunias or gigantic geraniums. Natural beauty is two a penny here. Instead lucky ticket-holders will witness the unveiling of something entirely man-made – yet, not: a 3D printed treehouse. The autonomously produced Kooky Cubby is the brainchild of a five-member consortium of Australian architects, engineers and robot designers. The precise design remains a tightly kept secret but the plastic molded cubby is known to draw on 3D printing technology developed by the Architectural Robotics Lab at RMIT University. Wooden Skyscrapers Springing Up Worldwide. The newest addition to the timber trend is a proposed 19-storey structure that will be built in the Swedish city of Skelleftea. The "Sida vid Sida" -- its name translated to side by side" -- submission was praised for paying tribute to the city's rich local timber industry, and the multiple design benefits attributed to wood as a building material.

Once complete, the 19-storey structure is expected to become the tallest wooden building in the Nordic countries.